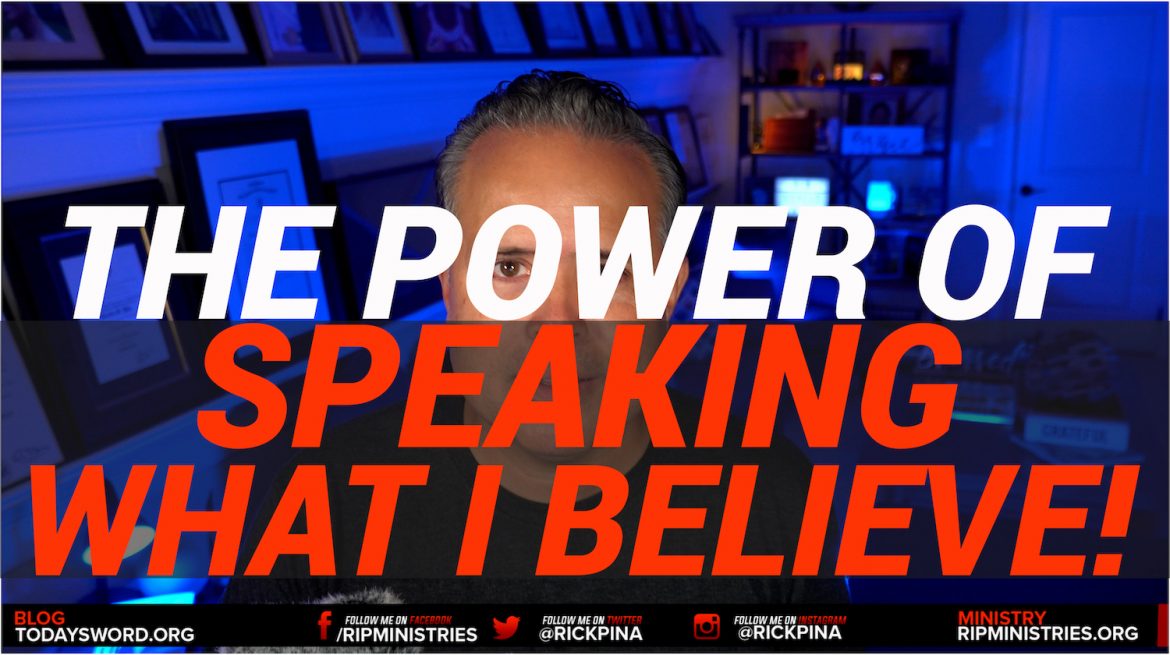 In our last message, we deal with verses 13.  We will go back to it again today.

We have the same Spirit of faith that is described in the Scriptures when it says, “First I believed, then I spoke in faith.”  So we also first believe then speak in faith.

I will add a couple of scriptures to look at again today as we get into the meat of the message.

For no matter how many promises God has made, they are “Yes” in Christ. And so through him the “Amen” is spoken by us to the glory of God

Then Mary said, “Behold the maidservant of the Lord! Let it be to me according to your word.” And the angel departed from her.

Mary responded, “I am the Lord’s servant. May everything you have said about me come true.” And then the angel left her.

So what does this mean for you today? A few things.

1.  Faith is not about you convincing God; it is what happens when God convinces you.

— Faith is not an exercise in you attempting to convince God to agree with your plans.  Faith is what happens when God convinces you to accept and align with the plans He made for you before the world began.

— Faith is not you moving God; faith is God moving you.  Faith is what happens when what God has revealed to you about your future becomes so real to you that you pursue it with divine confidence, even when it flies in the face of what you see in the present.

— Yesterday, we talked about Abraham and Sarah.  They had a baby when he was 100 years old, and she was 90.  They exercised their faith for the seemingly impossible to come to pass, and it did.  It was truly an act of faith because it was NOT something birthed in their hearts.  It was birthed in God’s heart, and He convinced them of it.  Many people come up with things in their own hearts, they petition it before the Lord, they find scripture to support what they are asking for, and they attach an “In Jesus’ name” to the end of it.  When they do, they call that faith.  The truth is, it was hope.  They were HOPING it would happen.  It cannot be faith until God has spoken, either clearly in His Word or directly to you.  Once God speaks, it adds substance to our hope, and we can cross over from hope to faith.

— Many people who attend church every week and who love God don’t understand how faith works.  They ask God for a litany of things, and their prayer life is “hit and miss.”  Sometimes what they asked for was alignment with God’s will, and God does it.  Other times it is not, and He does not.  They think they are living the life of faith, but they are actually just trying things and, as they say, “seeing what sticks.”  Faith begins where the will of God is known.  Faith originates in God’s heart.

— Abraham did not come up with the idea to be the father of many nations; God did.  David did not wake up one day and say he wanted to be the King of Israel; that was God’s plan.  Gideon never thought he would lead a revolution with 300 misfits that would defeat over 100,000 men; that was clearly God.  I could go on, but you get the point.  God made plans for you before the world began.  Your job is to discover those plans and then pursue them by faith, no matter how seemingly impossible they seem.  If God said it, He will do it, through you, for His glory!

— When your confidence is in God, and what you believe He has already done, you don’t take on any pressure to perform, you don’t rely on your humanity at all, and you can actually feel the weight/pressure fall off of you as you enter into God’s rest.  You see the invisible and perform the seemingly impossible because you are NOT the one doing the work.  It is the Father, living in You, He will give you the words, and He will perform the work.  That’s how you WORK and REST at the same time.

2.  There is a difference between speaking words you want to come true and speaking what you believe God has already done in eternity.

For years, I made faith confessions (or declarations) based on God’s Word.  I still do these today.  I actually lead you in one every day.  But my understanding of these has evolved over the years.  I will attempt to communicate my understanding.

— Many believers, who love God and who are well-intentioned, make faith confessions and they speak words they “HOPE” will happen.  They are openly declaring God’s Word but not fully persuaded of God by anything.  They are simply speaking positive confessions in hopes that these things will come to pass.  I am not saying that this is wrong, but to be clear, at best, this is “hit and miss.”  Sometimes this will world, and other times it will not.  I will explain why shortly.

— Some people take it a step further, and they believe they are “manifesting” or “creating” their reality with their words.  They even use scripture to support this belief.  They say what they want, over and over again, believing that God will somehow “have to” respond because they are speaking His Word.  Some even go so far as to believe they are “commanding God.”  To be clear, if you could command God, you would be God’s God.  You don’t tell God what to do.  That would be the tail wagging the dog.

— The text we have been looking at says, “We have the same Spirit of faith that is described in the Scriptures when it says, “First I believed, then I spoke in faith.”  So we also first believe then speak in faith.”  If you are speaking words you HOPE will come to pass, then you did not FIRST BELIEVE.  Remember, faith is what happens when God convinces you of the future He planned for you.  You have to FIRST BELIEVE what God is revealing to you, and THEN open your mouth to confess and declare it.  When you openly DECLARE what God is saying to you and you are speaking words of faith from a believing heart, then you are setting your faith, on earth, in agreement with heaven.  As a result, you will experience heaven on earth.

— Another scripture we looked at says, “For no matter how many promises God has made, they are “Yes” in Christ. And so through him the “Amen” is spoken by us to the glory of God.”  Did you catch that?  Once you know God has provided the “YES,” meaning that you know for sure that it is His will, then you open your mouth and provide the “AMEN!”

— I will give you an example of this as I close.  God revealed Himself to a young virgin girl through an angel.  God made it clear that it was HIS WILL for her to become pregnant without ever having sex.  It took her a few minutes, but she finally got it.  She believed what the angel was saying.  Once she was convinced that it was the Lord’s will, she opened her mouth and said, “May everything you have said about me come true.”  As soon as she said that, Mary, a virgin, got pregnant.  It was not her idea.  It was God’s idea.  It was impossible.  But she had the faith to FIRST BELIEVE and then SPEAK!  This is how we live the life of faith.

Father, this is a season of LEVELING UP for me.  I LEVEL UP by speaking words of faith from a believing heart.  By Your Spirit, You have revealed things TO ME that You prepared FOR ME from the foundations of the world.  When You do, I build up my faith to believe what You reveal to me, no matter how seemingly impossible it seems.  I first believe, then I speak.  You convince me, then I open my mouth, and I boldly declare what You have decreed over my life.  This is how I live, and this is how I know GREATER IS COMING FOR ME!  I declare this by faith.  In Jesus’ name, Amen!

We Can Withstand and Overcome Anything (Part 12) – Faith vs. Sight