We Can Withstand and Overcome Anything (Part 12) – Faith vs. Sight 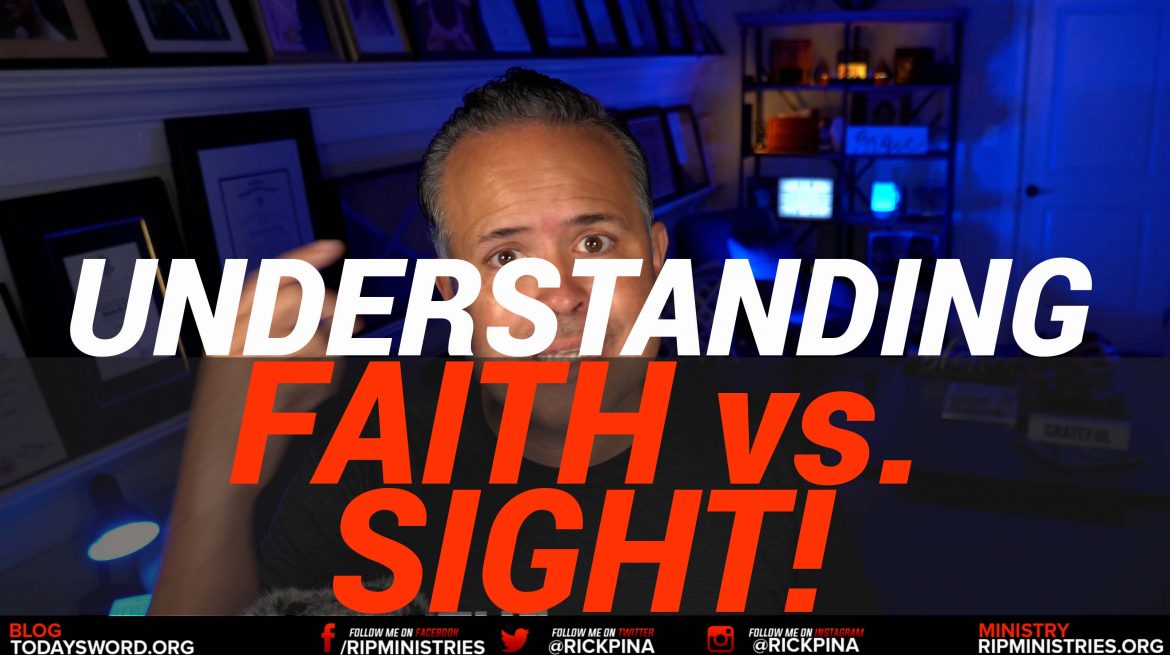 In our last message, we deal with verses 13.  We will go back to it again today.

As I focus on verse 13, I will add a situation that happened in Mark 11 as an example we can glean from.

In Mark 11, Jesus was leaving Bethany on His way to Jerusalem.  He and His disciples were accustomed to staying at Mary, Martha, and Lazarus’ home when He was in the area because it was just under two miles from Jerusalem.  This particular morning Jesus got up with a purpose.  Remember, Jesus always received His ‘orders from headquarters.’  The Father revealed to Jesus that His assignment for the day was to kick the money changers out of the temple area.  So Jesus and His team left for Jerusalem early in the morning.  He left so early, and He was so focused that He did not eat breakfast.

On the way, Jesus saw a fig tree.  He went to the tree to see if it had any figs on it.  He was hungry.  But the tree had no figs.  This is where you must remember that Jesus only said those things He heard (in the Spirit) the Father say, and He only did those things He saw (in the Spirit) the Father do.  So, in the Spirit, Jesus saw the tree dried up from the roots.  Part of living by faith is SAYING what you BELIEVE based on what God revealed.  Therefore, Jesus said, “No man will never eat fruit from you again.”  Why did Jesus say that?  He said it because:

1) the Father revealed it to Him (Jesus saw the fig tree dried up in his heart),

2) Jesus believed what the Father revealed (even though he was getting input from his body that contradicted what the Holy Spirit was saying), and

3) Jesus had the faith to SAY, OUT LOUD, what He believed.

Although Jesus said it with authority, nothing happened immediately.  It did not matter to Jesus because faith is not moved by what you see.  In eternity (or the UNSEEN realm), the tree was already dead.  On the earth (the seen realm), it was going to take some time.

The next morning Jesus and His disciples took the same route back to Jerusalem.  They passed by the same tree again.  This time the tree was dead.  It was dried up from the roots.  Peter remembered what Jesus said the previous day and screamed, “Master, look!  Yesterday you told that fig tree to die.  Now it is dry and dead!”  This is where we will get our lesson today.  Jesus took this as an opportunity to teach His disciples (and us) about faith.  Let’s look at what happened next from two translations:

“Then Jesus said to the disciples, “Have faith in God. I tell you the truth, you can say to this mountain, ‘May you be lifted up and thrown into the sea,’ and it will happen. But you must really believe it will happen and have no doubt in your heart. I tell you, you can pray for anything, and if you believe that you’ve received it, it will be yours.”

So Jesus answered and said to them, “Have faith in God.  For assuredly, I say to you, whoever says to this mountain, ‘Be removed and be cast into the sea,’ and does not doubt in his heart, but believes that those things he says will be done, he will have whatever he says.  Therefore I say to you, whatever things you ask when you pray, believe that you receive them, and you will have them.

So what does this mean for you today? I will deal with this passage for days.  But for this morning, I will give you two quick points.

1.  We are called to walk and live by faith, NOT sight.

— You are a tri-partite being like God.  God is Father, Son, and Spirit.  You are Spirit, Soul, and Body.  The real you is a spirit.  Your spirit possesses a soul, and you live in a physical body (for now).

— If you are Born-Again, God’s spirit connects with your spirit and makes you new, on the inside, the moment you were Born-Again.  This means you have a recreated spirit.

— When Jesus stood in front of the fig tree, His body saw the tree as it was, in this world.  However, in His Spirit, He saw the tree dried up from the roots.  In His soul, Jesus had to decide which input He was going to believe more.  Whichever He believed more would be the one He spoke and acted upon.

— Jesus decided to speak what His Spirit was saying to Him, over what His body was transmitting through His eyes, even though the two were clearly contrary one to another.  Living by faith means you are willing to SAY what God is revealing to you, even when you do not have any sense-realm evidence to support it.  Further, even when the sense-realm evidence you do have it against it.

— To live by faith, you must SAY what God is revealing, even at the risk of looking foolish.  Jesus looked at the tree and said, out loud, “No man will never eat fruit from you again.”  He then walked away like it was already done.  It did not bother him that the tree did not die immediately.  As far as Jesus was concerned, the tree was already dead.  This is the life of faith.  This is the type of confidence we are called to live with.  Where we can SAY what God revealed and then walk away, like it’s already done, knowing it is only a matter of time.

— In our text (Mark 11:22-24), Jesus taught us that if we speak what God is revealing, believing what we say, without a single doubt in our hearts, we will have what we say!  Paul told us to believe first and then speak.  If we do, as Jesus said, we will have whatsoever we say.

— Jesus heard a Word from God, and He spoke it, no matter how crazy it seemed.  He was so convinced that what God led Him to say would come to pass that he walked away like it was already done.  This is the type of confidence we are called to live with.

— When God leads you to say something that is beyond human ability, beyond the natural laws or rules of this world, He is inviting you to experience the supernatural.  But in order to do so, you must have the faith to first believe what God is saying and then SAY what God is saying until you SEE what He SAID!

— It takes faith to SEE the invisible (the unseen realm).  After seeing it, it takes faith to SAY what you saw and to then provide corresponding actions, based on what you saw, even when everything you are seeing and feeling (with your natural senses) goes against what God revealed.

— Part of what sets the impossible in motion is opening up your mouth and SAYING what God revealed and believing what you say.  With your mouth, you are activating your faith.  With your heart, you are believing the impossible.  If you have the courage to SAY what God reveals, no matter how crazy it seems, and you do so without a doubt in your heart, Jesus said, “you will have what you say.”

— Like Jesus’ situation with the fig tree, it may not happen while you are standing there.  It may not happen right away.  It may take days, weeks, months, or even years.  But if God revealed it to you, you believed it, and you activated your faith to receive it, give it time, and don’t lose heart while you wait; you will have what you Say!

Father, this is a season of LEVELING UP for me.  I LEVEL UP by speaking words of faith from a believing heart.  I take You at Your Word.  I know You will watch over Your Word to perform it in my life, no matter how crazy or supernatural it seems.  I am a believer and not a doubter.  I walk by faith and not by sight.  I live by every Word You speak and reveal to me.  As You give me words to believe, and as you reveal things to me about my future, I open my heart to them, no matter how big or impossible they seem.  I believe what You reveal in my heart.  I then muster up the courage, which is my faith, to openly SAY what You revealed, out loud, at the risk of looking foolish.  I say what I believe, without a doubt in my heart, and You have promised me that I will have what I say!  Because I am saying what You have SAID!  I am declaring what You have DECREED over my life!  This is how I know GREATER IS COMING FOR ME!  I declare this by faith.  In Jesus’ name, Amen!

We Can Withstand and Overcome Anything (Part 13) – The Impossible is Possible For Us!