The Cross Changed Everything! 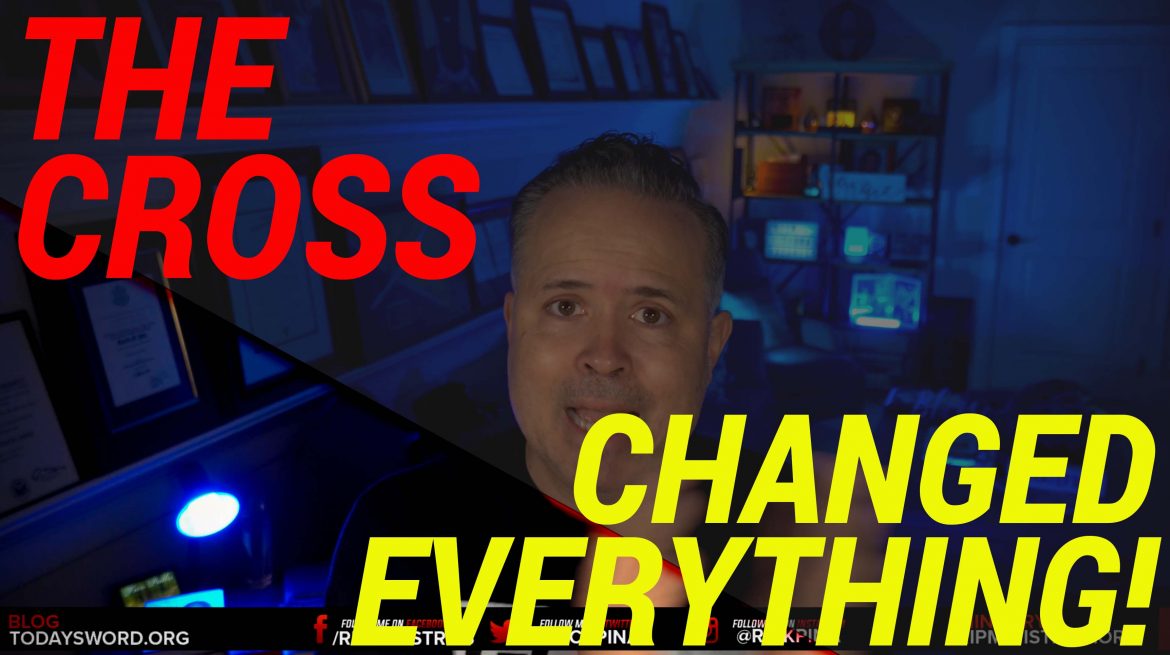 We have been in this series for a few months, and we are now just a couple of weeks away from Resurrection Sunday.  I have been sharing messages with you about the importance of the cross.  Today’s message will flow in that same vein.  We will look at the difference between living under The Law of Moses and living under the grace Jesus ushered us into.

1.  Understanding the difference between The Law and Grace.

In Romans, Paul drove home the same point. He said, “Sin is no longer your master, for you no longer live under the requirements of the law. Instead, you live under the freedom of God’s grace.” (Romans 6:14).

If you study the differences between the covenant given through Moses (the Law) and the covenant given through Jesus (Grace), you will see how much things changed between the covenants. The point I am making here is that God expects us to act accordingly. If God told us in His Word that we are no longer under The Law but rather under grace, it is important for us to understand what that means in practice if we are going to live lives that are pleasing in His sight.

2.  We are living under a different set of rules.

It’s not that God changed, but in many respects, the rules have changed.  Under the Old Covenant, the Lord had a certain agreement, and He operated in accordance with that agreement.  Under this New Covenant, we have a new agreement, and the Lord is operating in accordance with it.  If you don’t understand the differences between the two agreements, you might read something about God and how He operated under the Old Covenant and then make the mistake of thinking He will deal with you the same way today, even though you are under a New Covenant.

You will never maximize something you do not understand.  If you mix the two covenants, you will get confused, and it will most likely hinder your ability to receive from God.

3.  The Old Covenant of The Law focused on man and it served its purpose.

The Covenant of The Law put emphasis on man and what man could do for God. It was all about human performance. It caused man to strive to please God with his effort. This created an environment where everyone was attempting to do everything right, and unfortunately, the environment also lent itself to people who were very judgmental. People were so focused on their performance that they looked down on those who were not performing on their level. These are the type of religious people Jesus ran into all the time while He was on the earth.

I will use the woman caught in the very act of adultery as an example. First of all, they did not bring the man (who was also caught). They brought the woman, and the religious leaders wanted Jesus to condemn her for her actions. If He did, then under The Law, she could be stoned to death.

Jesus turned the tables on them and said, “If you are without sin, then cast the first stone.” Of course, no one is without sin, so the judgmental religious people wound up leaving this woman alone. Their message, under the Old Covenant, was: “We are right and she is wrong.” Jesus’ message, under the New Covenant, was: “Every human is wrong, and you can only be delcared right by grace.”

— Man can’t get saved until he acknowledges the fact that he is lost.

— Before The Law was given, man did not have any rules to break. Therefore, he could not sin, per se.

— Once The Law was given, man had rules, and once he had rules, he was quick to break them.

— By focusing on what man could do for God under the Law, man was quick to see himself as inadequate. That is why The Law made provisions for sacrifices. The blood of innocent animals was shed for the actions of the guilty man… until Jesus came!

Paul said, “Dear brothers and sisters, here’s an example from everyday life. Just as no one can set aside or amend an irrevocable agreement (contract), so it is in this case. God gave the promises to Abraham and his child. And notice that the Scripture doesn’t say “to his children,” as if it meant many descendants. Rather, it says “to his child”—and that, of course, means Christ. This is what I am trying to say: The agreement God made with Abraham could not be canceled 430 years later when God gave the Law to Moses. God would be breaking his promise. For if the inheritance could be received by keeping the Law, then it would not be the result of accepting God’s promise. But God graciously gave it to Abraham as a promise.” There is a lot covered there, and I will pull out certain nuggets in the points. For now, let’s continue.

Paul then asked a very important question, “Why, then, was the law given?” This is, as they say, the million-dollar question. Paul gives us the answer, “It was given alongside the promise to show people their sins.” In plain language, in black-and-white, Paul gives us the purpose of the Law. And Paul continues, “But the law was designed to last only until the coming of the child who was promised.” That child was Jesus!

Let’s break this down:

a) The promise given to Abraham was for him and his “seed” or “child.” Paul tells us that this “seed” or “child” was actually Jesus. This covers Abraham (all those who came through his bloodline) and Jesus (all of us who are connected to Him by faith). Because of Christ Jesus, both Jews and Gentiles are children of Abraham and heirs according to the promise.

b) The Law, given 430 years after Abraham, could not cancel the binding agreement (contract) God had with Abraham. Abraham was already gone, so God could not change the contract. The point is that the Law, which came later and focused on works, could not affect the promise given to Abraham. This promise was based on faith and not The Law. This is why back in Galatians 3:7, Paul said, “Understand, then, that those who have faith are children of Abraham.” Abraham is the “Father of faith,” not The Law.

c) The Bible says, in no unclear terms, that The Law was given “to show people their sins” (Galatians 3:19).

d) The Law was not designed to make us right with God. It was designed to show us that we are wrong and that we need a Savior.

e) You won’t ever realize you need to get saved until you acknowledge you are lost. The Law was designed to show us how lost we are without God.

g) The Law had an expiration date. The Bible says, “But the law was designed to last only until the coming of the child who was promised” (Galatians 3:19). That child was Jesus!

h) The Bible calls the Old Covenant (the Law of Moses) obsolete and outdated. The writer of Hebrews said, “By calling this covenant “new,” he has made the first one obsolete; and what is obsolete and outdated will soon disappear” (Hebrews 8:13). The same writer told us that Jesus is the mediator of a “better covenant, which was established upon better promises.” (Hebrews 8:6). If the Bible teaches us that the purpose of the Old Covenant was to show us our sins, that this Covenant is now obsolete and outdated, and that Jesus mediated a better Covenant based on better promises, why would we be fixated on the Old Covenant? The only answer I can think of is that believers have not been taught. As you read Galatians 3 and Hebrews 8 for yourself, please open your heart to the grace and truth provided by Jesus. If you do, you will live free from the bondage of The Law and, more importantly, free from the power of sin. Once you embrace God’s grace, you are free to be led by the Holy Spirit to do whatever God has called you to do, and sin will no longer have power over you!

Father, I thank You for sending Your Son Jesus to die in my place.  Jesus delivered me from the bondage of The Law.  The Law was perfect, but I am not.  Therefore, under the Law, I would quickly be condemned.  Thankfully, under grace, I have been forgiven.  Not because I am so good, but because You are!

The Law was given through Moses.  Grace and truth came through Jesus.  Under the Law, the emphasis was on man and what we could do for You.  Now, under grace, the emphasis is on You and what You have already done for us.

Christ redeemed me from the curse of the Law, being made a curse for me.  I thankfully accept the forgiveness, love, and purpose You freely give me by grace!  As I do, I know GREATER IS COMING FOR ME!  I declare this by faith.  In Jesus’ name.  Amen.

Jesus Ushered Us Into A GLORY That Never Runs Out!

Comparing and Contrasting the Old and New Covenants