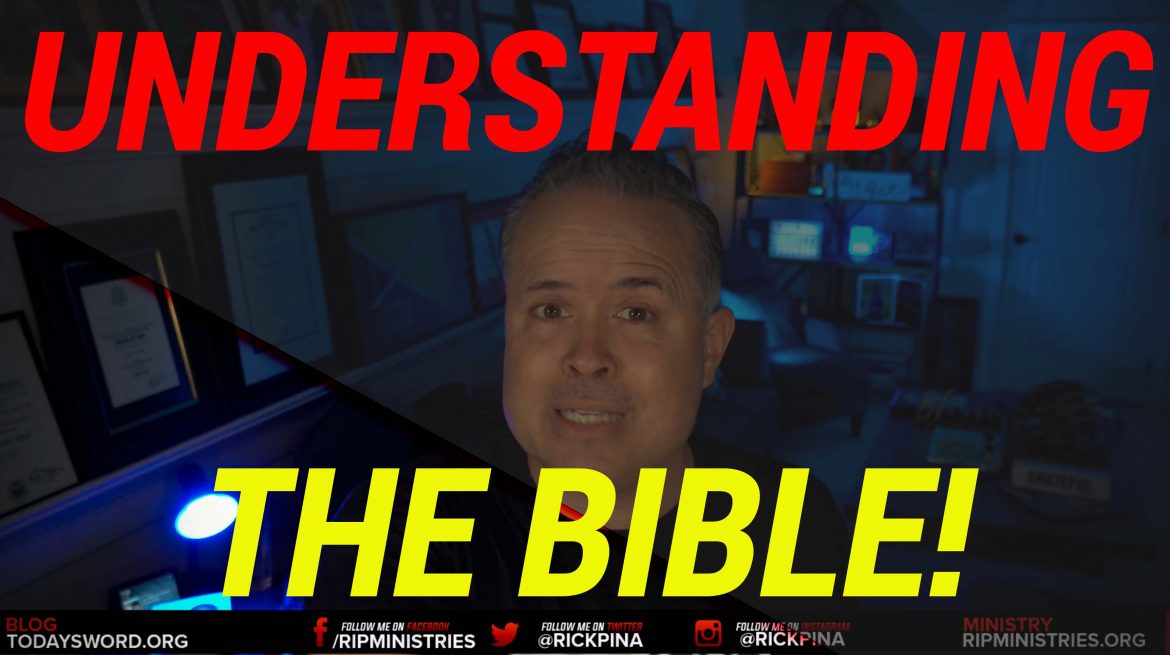 We have been in this series, learning from the life of Jesus, for a few months, and we are now just a couple of weeks away from Resurrection Sunday.  I have been sharing messages with you about the importance of the cross and how Jesus’ death, burial, and resurrection changed everything!  Today’s message will flow in that same vein.

1.  It is important to truly understand what the Bible teaches and how it applies to you today.

The Bible contains 66 books of God’s will documented. There are people all over the world who are seeking God’s will, claiming they can’t discover it, all the while carrying a Bible in their hands. The Word of God contains the will of God on paper. Read it slowly, prayerfully, and carefully. As you read what God said (back then), you will be in a position to hear what He is saying to you today.

I often say that you cannot maximize what you do not understand. While the Bible does contain many of the keys to life, those keys cannot be applied correctly if you lack understanding. This is where Biblical teaching comes in. While we must all study the Bible for ourselves, there are some who are called by God to explain God’s truth in a way that others can see, hear, and understand.

I hope you appreciate the teaching on God’s grace. I know that for me, learning about grace has been liberating. Growing up, I did not understand the God worshipped in church. When I heard Old Testament stories of the wrath of God being poured out on people, I was afraid. I developed a fear of God. Not a reverential fear that drew me to God in worship, but an actual fear that pushed me away from God’s presence.

I did not know anything about the purpose of the Law. No one had ever explained to me the difference between the Old and New Covenants. I was never told that Jesus came to fulfill the Law.  I was never taught that we are now under grace and that God’s grace could change my life. And even after I was Born-Again, I served God for several years out of a fear of losing my salvation and going to hell. I did not serve God because I loved Him. I served Him because I was afraid of going to hell.  I tried my best to do everything right, and I did not even know that I was living under human effort and performance-based religion.

The writer of Hebrews said, “If the first covenant had been faultless, there would have been no need for a second covenant to replace it.” (Hebrews 8:7). Notice that the Bible does not say the second covenant was “added” to the first. No, it makes it clear that the first covenant was not faultless, and the second one replaces it. The writer went on to say, “When God speaks of a “new” covenant, it means he has made the first one obsolete. It is now out of date and will soon disappear.” (Hebrews 8:13). The Old Covenant (the Law of Moses) is obsolete. It has been superseded. Under the Old Covenant, God wrote His Law on tablets of stone. Under the New Covenant, God said, “I will put my laws in their minds, and I will write them on their hearts. I will be their God, and they will be my people.” (Hebrews 8:10). Now we have God’s Law in our hearts and minds. Not only that, but under this new Covenant, God said, “I will be merciful to their unrighteousness, and their sins and their iniquities will I remember no more.” (Hebrews 8:12).

2.  The Old Covenant served its purpose, showing people their sin and highlighting a need for a Savior.

— Paul taught, “The Law gives sin its strength.” (1 Cor 15:56). Without the Law, you would not sin because you would not have any rules to break.

— Paul even called the 10 commandments, which was God’s Law etched in stone, “the ministry of death.” (2 Cor 3:7). The Law was designed to get us (mankind) to the end of ourselves. We could never fulfill the Law. The Law condemns us, but Jesus came to give us access to eternal life and freedom IN HIM by Grace!

3.  Many believers are holding on to the Old Covenant becuase they don’t understand where we are in the Book.

— The Old Covenant sought to highlight sin and man’s need to be saved from it. Under the New Covenant, God has vowed to be merciful to our unrighteous. Our sins and iniquities He will remember no more! (Hebrews 8:12).

— One day there will be a rapture, which will mark another transition. Then Jesus will come back to judge the living and the dead, and there will be another transition. Eventually, we will have a new heaven and a new earth. The Bible says, “Then I saw “a new heaven and a new earth,” for the first heaven and the first earth had passed away, and there was no longer any sea.” (Revelations 21:1 NIV).

— If you don’t understand where you are in God’s story, it’s easy to get confused and then say that the Bible contradicts itself. There is no contradiction in the Bible. You just have to understand the transitions and where we are in the journey.

4.  Jesus delivered us from performance-based religion.

Jesus delivered us from performance-based religion.

— The Apostle Paul went on several missionary journeys, and he ran into lots of opposition when he preached salvation by grace to Jews who had been conditioned to focus on works.  The Jews quickly rejected and fought against the gospel of grace because they were so focused on what they thought they were doing for God that they could not embrace what God had already done for them through Jesus. Unfortunately, over 2,000 years later, many (Jews and non-Jews alike) still have the same mentality.

— You should perform divine works BECAUSE you are saved, not to BE saved.

— Salvation is a gift, not a reward for work(s). Paul said, “God saved you by his grace when you believed. And you can’t take credit for this; it is a gift from God. Salvation is not a reward for the good things we have done, so none of us can boast about it.” (Eph 2:8,9 NLT). You could never earn or deserve eternal life, so stop trying. Accept eternal life, through Christ Jesus, by grace, as a gift. A gift cannot be earned. If you can earn it, it is not a gift; it is a payment.

*** Embracing God’s grace has changed my life and ministry. I no longer to do focus on myself and whether or not I am good enough for God or His assignment for my life. Now I simply serve God because I love Him, and I embrace His assignment and the grace to perform it by faith. Not because I am so good, but because He is. Grace has set me free from human effort, and I pray it does the same for you! Live #TheGraceLife

Father, thank You for helping me understand Your grace. Before the Law was given, You freely blessed Abraham, Isaac, Jacob, Joseph, and Moses by Grace. They did not earn anything, and You blessed them richly. Not because they were good, but because You are good.  But then the Law was given.  Under the Law, there was a shift to human effort. Under the Law, You dealt with humanity according to man’s performance. Under the Law, you required us to live by a certain set of rules and regulations. The Law was designed to get man to the end of himself; to show mankind we need a Savior. You sent that Savior, and His name is Jesus.

Through Jesus, a New Covenant was established, making the Old Covenant obsolete. I am no longer under the Law but under Your grace. No longer do I live my life focused on me, on human effort, or on whether or not I am good enough. I now live my life focused on You, on Your love for me, and on what You assigned me to do before the foundations of the world. I will do all You birthed me to do. Not because I am so good, but because You are. Not because I can do it, but because You can do it through me. Living this way, GREATER IS COMING FOR ME! I declare this by faith. In Jesus’ name. Amen.

Comparing and Contrasting the Old and New Covenants