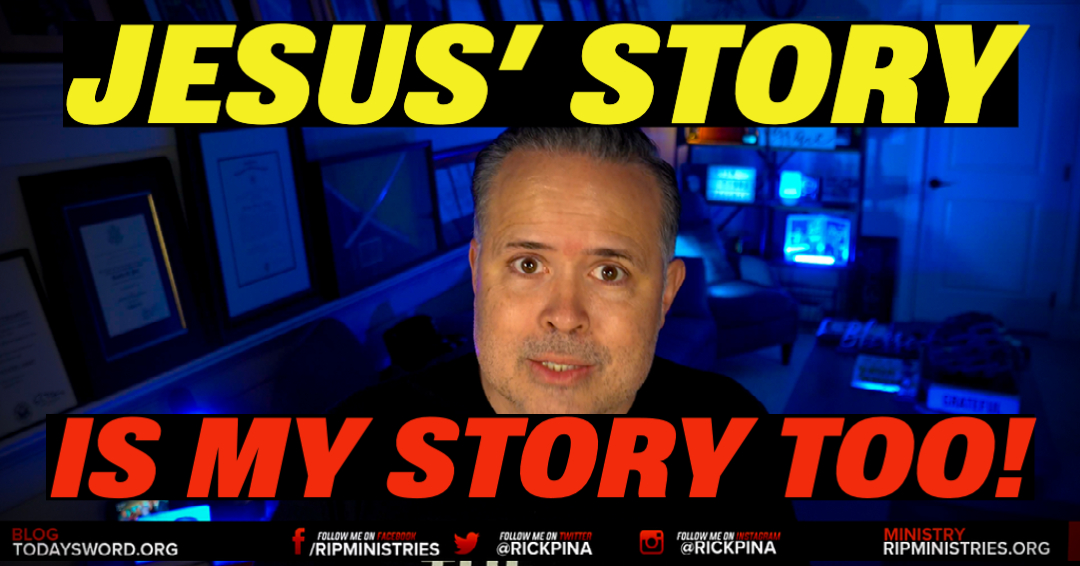 NOTE:  Next week is Spring Break for our kids.  So I will be on vacation with the family.  This is the last message you will receive before Good Friday and Resurrection Sunday.  I have over 2,500 videos on YouTube (https://www.youtube.com/rickpina) and thousands of messages on the blog (https://todaysword.org).  Please check those out while we are gone.  I am looking forward to the break.  Thank you in advance for praying for us.  We will continue to pray for you.

I have been sharing messages with you about the importance of the cross and how Jesus’ death, burial, and resurrection changed everything!  Today’s message will flow in that same vein.

One of the soldiers stabbed him in the side with his spear. Blood and water gushed out.

Over 500 people saw Jesus after His crucifixion. That should be proof enough that He was raised from the dead. But some may say, “Wait a minute Rick. What is Jesus did not truly die?” Okay, let’s deal with what we know.

On the day of His crucifixion, Jesus had already been beaten severely, having been flogged 39 times with a cat-o-nine-tails, made to carry the cross that He would be nailed to up a hill, and then physically nailed to the cross in front of hundreds of witnesses. Jesus hung on that cross from 9am to 3pm. He was on display for everyone to see. People watched as He shifted the weight of His between His pierced hands and feet. People watched as He struggled through the tremendous pain caused by the railroad-like spikes causing his nervous system to fire pain and distribute pain throughout His body. The crowd heard Jesus say, “It Is Finished!” And they watched as He gave up the ghost.

The final evidence of Jesus’ death came after He gave up the ghost. The day Jesus died was a day of preparation. It was the day before a special Sabbath. The Jews could not touch anything dead on the Sabbath, so they did not want to leave the bodies hanging there until after the Sabbath. That would be disrespectful. This meant that they only had three hours to get the bodies off of the crosses and into the tombs. They asked Pilate for authorization to break the legs of the men to ensure they were dead. Roman Soldiers came and broke the legs of the two men who had been crucified with Jesus. When they got to Jesus, however, they believed He was already dead, so they did not break His legs. But they still needed to verify His death. So one of the Soldiers stabbed Jesus in the side with his spear. The Bible says that blood and water gushed out.  Jesus was clearly dead. Let’s take a look at some of the evidence:

a) Rome was in power at the time, and Roman soldiers were skilled in battle.

b) Roman spears were tapered to a point and were designed to easily penetrate the human body.

c) The Soldier must have yielded the sword violently because Jesus would later ask Thomas to thrust his entire hand into the wound (John 20:27). So we can assume that the wound was at least five inches wide and very deep.

e) Lastly, this method was used to verify Jesus’ death (and not the breaking of His legs), because it had been prophesied that not one of his bones would be broken (Ex12:46, Ps 34:20). This is a reminder that God was still God throughout the entire ordeal.

f) Jesus really died. He died FOR you! He died in your place! You should never cease to be thankful for what Jesus did.

2.  Resurrection power is now available to you, but it comes at a cost!

Resurrection power is now available to you, but it comes at a cost!

a)  In order to experience the power Jesus experienced, we must be willing to endure like He endured.

So we constantly experience the death of Jesus in our own bodies, but this is so that the life of Jesus can also be seen in our bodies.

Reading and meditating on this verse reminds me of something Paul said in his letter to the believers in Philippi.  He said, “All I want is to know Christ and the power that raised him from death.  I want to share in his sufferings and be like him even in his death.  Then there is hope that I myself will somehow be raised from death.” (Phil 3:10,11 ERV).

b)  Resurrection power and earthly suffering come as a package deal.

The resurrection power of Jesus and the fellowship in the sufferings He experienced are inextricably linked.  Believers today want power, but most don’t want sufferings.   You can’t have one without the other.

If you want to walk in the power Jesus walked in, you must be prepared to experience the opposition He experienced while He was on the earth.  And you can never give up along the way.

Lastly, both power and prosperity come with persecution.  If you are going to operate in the supernatural, allowing God to use you to do things that are clearly beyond the limits of humanity, people will talk about you.  Further, if you are going to experience divine success and allow God to use you to accomplish all He birthed you to accomplish, you will face opposition.  Satan is not going to idly sit by and watch as God uses you to change the world.  So to be divinely impactful on this planet, you must come to the realization that worldly persecution on this planet will be part of the process.

COVID-19 will come and go, but worldly persecution will never cease until Jesus returns.  You must not be moved.  You must determine to be unchanged by the opposition this world throws at you.  Come what may, resurrection power has been made available to you by the grace of God.  Embrace it.  Enjoy it.  Walk in it.  Because you will need it to become the man/woman you are called to be!

3.  I will close with a poem I wrote over 20 years ago, under the inspiration of the Holy Spirit. It is entitled “The Story.” Enjoy.

God deposited His best inside of Adam in the Garden,

but shortly thereafter, humanity was seeking a pardon,

Adam sinned, and the recovery from this sin… a chore.

God re-established His blessing with a man named Abraham,

to bless the whole world was his charter, his mandate, his command,

I am not really sure if Abraham could truly understand,

the awesomeness of the task the Lord had just placed in His hands.

But sin and death still ruled because of Adam’s transgression,

an answer to this dynamic-duo of destruction was needed in the land,

two types of lambs were chosen as an annual concession,

the blood of innocent animals was to be shed by the hands of guilty man.

The PASSOVER lamb served as a covering for death,

the Atonement lamb as a covering for sin,

but the blood of these animals was a temporary solution,

God sent Jesus to fight the ultimate battle – and win!

Jesus was the PASSOVER lamb,

death had been conquered once and for all,

Jesus was also the Atonement lamb,

So behold the Lamb of God who took away the sin of the world,

they hung Him high, they stretched Him wide, He hung His head, for me He died,

and for three hours, the light of the sun was stilled.

But the true victory came later, after three nights and three days,

when Jesus rose with all power in His hand,

the Resurrection is the Gospel, told in so many ways,

and we must keep preaching it all throughout the land!

Jesus died to pay the penalty for sin,

Jesus rose so we could do the same,

Jesus’ victory is transferred to us, so we now win,

back to dominion, blessing, and power in life’s game.

So this upcoming Resurrection Sunday, please remember what it’s all about,

it’s about more than rabbits and eggs and colorful attire,

it’s about redemption from sin and death, which should make you want to shout!

Jesus died! Jesus rose! So we could live Higher!

that’s the story that we preach all over the globe,

but it’s more than just a story; it’s a life-changing thing,

it’s the Gospel, preached for the whole world to know!

Jesus is Alive! That’s the story!

Father, I thank You for sending Jesus to die in my place.  I know His death was no hoax, and no one took His life.  The Pharisees, the Sanhedrin Council, Pilate, and all of Rome could have come together, but none of them had the power to take Jesus’ life.  Jesus willingly gave up the ghost for me.  Jesus died a true and total death, but You resurrected Him to complete and total life.  I flow in that same vein this morning.

I speak to every seemingly dead situation in my life, and I declare that Your resurrection power comes TO ME and flows THROUGH ME!  I serve a God who can give life to dead situations.  So I speak life and not death, blessing and not cursing, victory and never defeat!  The power of God is manifesting itself in us, through us, with us, and for us!  Jesus is LORD over my household, and because You, God, are the greatest power, we shall never be defeated!

We overcome because Jesus overcame!  All power in heaven, on earth, and under the earth, was given to Jesus when You raised Him from the dead.  Jesus then gave me the right to operate in that power, in HIS NAME!  I declare that I do.  Living this way, I know GREATER IS COMING FOR ME!  I declare this by faith.  In Jesus’ name.  Amen.

Why Jesus’ Death and Resurrection Matter

What the Resurrection of Jesus Means to YOU!