What the Resurrection of Jesus Means to YOU (Part 5: We are all ONE in Christ!) 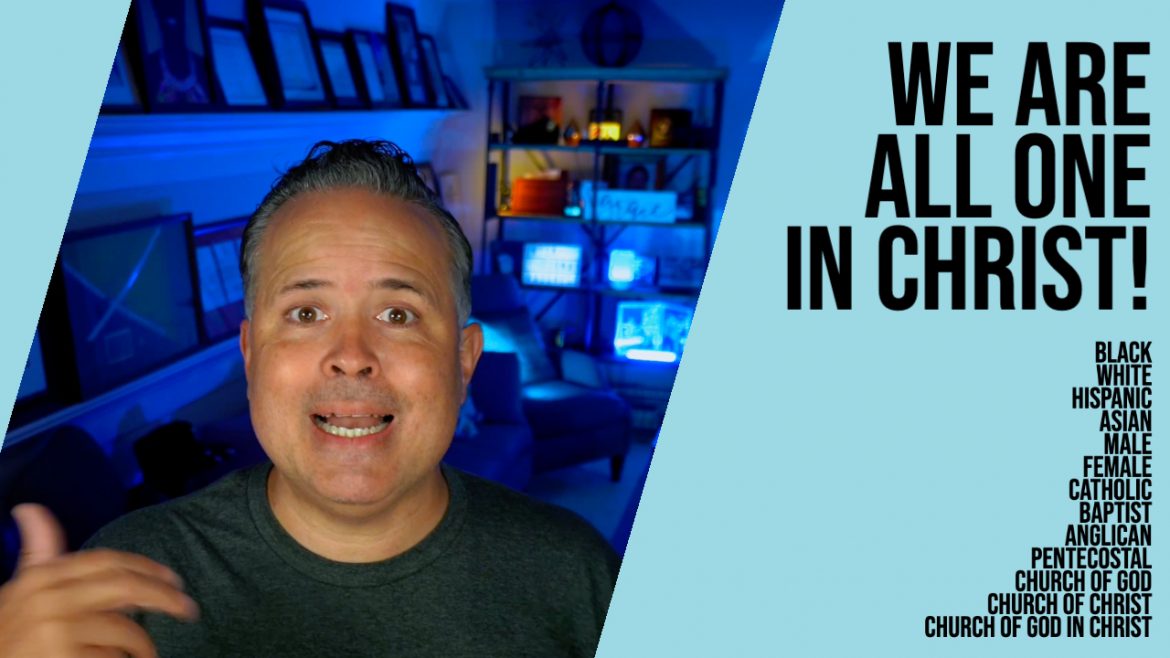 This past Sunday was Easter/Resurrection Sunday.  I have taught you several messages about the importance of the Resurrection already.  Today I will continue to build upon what I have shared thus far.

Paul says, “Before you Gentiles knew God, you were slaves to so-called gods that do not even exist.” Paul makes a general statement and highlights the fact that we were all subject to something. Most of the Gentiles of his day worshiped idol gods. Paul continues, “So now that you know God (or should I say, now that God knows you), why do you want to go back again and become slaves once more to the weak and useless spiritual principles of this world?” Once they knew God and God knew them, Paul accused them of attempting to go back to become slaves to “useless spiritual principles of this world.” That’s pretty strong language. So what are the useless principles Paul is referring to? Pau explains, “You are trying to earn favor with God by observing certain days or months or seasons or years.” The useless principles Paul refers to are those associated with attempting to earn God’s favor (or grace) by observing or complying with certain things. Paul goes on, “I fear for you. Perhaps all my hard work with you was for nothing.” Paul exposes his frustration. He had made a tremendous investment in these people, preaching the gospel of grace, and somehow they were being seduced or coerced to live under The Law. Finally, Paul begs them, saying, “Dear brothers and sisters, I plead with you to live as I do in freedom from these things, for I have become like you Gentiles—free from those laws.” Paul was baffled at how Gentiles, who never knew The Law of Moses, were now attempting to live by it while he, who was raised as a Jew, was no longer living under The Law. That is a Big Reversal!

So what does this mean for you today?  I will share a few thoughts about the fact that when Jesus died on the cross and was raised from the dead, He opened up The Blessing to non-Jews (Gentiles). Now we can all walk with God, but God still expects us to do so by grace and no performance.  Let’s break this down:

1. Before coming to the one true God, many worshipped false gods, and they could not ever have a personal or intimate relationship with a false deity. This was the condition of the Gentiles of Paul’s day and still many people today.

2. Before Jesus came, the Israelites had a relationship with God under The Law of Moses, but they were the only ones who knew God, and for most of them, it was a distant relationship with an external God. They knew God through ritual and routine, but not through relationship. Unfortunately, many religious people are in the same boat today.

3. After coming to the one true God and establishing a personal and intimate relationship with Him through His Son Jesus, Paul warned those who then attempted to live by The Law. Once you have God inside of you (the Holy Spirit), but you attempt to live by an external set of rules, you are going back to a lesser Covenant.

4. The Gentile believers in Galatia had never lived under The Law of Moses because they were not descendants of Abraham. But after being Born-Again by God’s Holy Spirit, many Jewish-Christians (Jewish converts to Christ) were pushing the newly converted Gentiles to get circumcised and live under the Law of Moses. Paul urged the Gentiles NOT to do it because if they did, they were attempting to live by something that did not even work for the Jews. Paul was raised as a Jew, and he knew firsthand how The Law could not make you right with God. He was confused at how non-Jews were tricked into embracing The Law when it was: 1) never written for them in the first place, and 2) no longer the answer for the Jews either. Paul was upset that religious Jews were attempting to PUT The Law on Gentiles when they were not supposed to be living by The Law either.

5. If anyone knew The Law, it was Paul. Paul was raised a Pharisee, descended from Pharisees (Acts 23:6). Not only that, but he studied under Gamaliel, one of the greatest teachers of The Law of his time. So if Paul, who was raised in the strictest environment, rejected The Law, it made no sense to him why Gentiles, who were never under the Law in the first place, would want to take on the bondage of The Law after being Born-Again.

6. Chances are you are NOT a Jewish believer. Most of my readers are Gentiles (non-Jews). That being the case, what Paul said to the Gentiles in Galatia applies to you. If Paul, who was raised under The Law, accepted freedom from The Law through Jesus, by grace, then why would you attempt to live under a Law that expired before you were born and that was originally written for a different group of people? Think about that for a minute. I was in this boat. My descendants are not Jews. But I was raised to embrace The Law of Moses and to attempt to live my life by a set of rules that had expired before I was even born. This happened to me, and I am sure it happened to most of you.

7. Paul was a Jew, living like Gentiles (free from The Law), and many of the Gentiles in Galatia were attempting to live like Old Testament Jews (under The Law). It did not make sense then, and it does not make sense today. In Galatians 3:28, Paul said, “Now, in Christ, it doesn’t matter if you are a Jew or a Greek, a slave or free, male or female. You are all the same (one) in Christ Jesus.” And in Christ, we are free from the bondage of The Law. So please live grace-based and not performance-based.

8. Today, it does not matter if you were born a Jew or not. It does not matter if you are a male or female, young or old, Black or White, Hispanic or Asian, rich or poor. Jesus died for everyone everywhere. We are all ONE in Christ. And once we are in Christ, we should not attempt to take on a Law that 1) is outdated and obsolete, and 2) was never written for us in the first place. Becuase of Jesus’ death, burial, and resurrection, we can embrace the grace of God. God is not looking for you to earn what He wants to do in your life; He is only looking for you to BELIEVE!

9. The Law was given by Moses. Under that covenant, people had to attempt to perform. It was designed to show mankind that we can’t, that we are not good enough, and that we need a Savior. That Savior came. His name is Jesus. Now, under the covenant of grace Jesus ushered us into, our job is to believe what God believes about us. The life of faith is not about our performance or us attempting to convince God to give us our desires. The life is faith is about us being settled in the fact that Jesus paid it all for us. We must learn to rest in His finished work. Once we do, instead of trying to convince God, we are in a position to allow God to convince us. True faith is what happens when we are fully persuaded of what God called us to do, and we are crazy enough to attempt it, at the risk of looking foolish, knowing that it can only get done by the grace of God! This is #TheGraceLife and it is how we are supposed to live.

Father, I thank You for teaching me the message of Your amazing grace.  I accept it.  I embrace Your grace.  Jesus was the only human to ever comply with and fulfill The Law.  Jesus was perfect.  I am not perfect, but Jesus was perfect for me.  I could not fulfill The Law, but Jesus fulfilled it for me.  After Jesus died, was buried and rose from the dead, the Holy Spirit was given on the Day of Pentecost, and the New Covenant was established.  I was Born-Again by Your Spirit, and I now live under Your New Covenant of Grace.  I am not under The Law but under grace.  Christ redeemed me from the curse of The Law, and I am now free to live my life led by Your Spirit, with Your Grace, in order to do all Your want to do while I am in the land of the living.   My job now is to believe what You believe about me.  My job is NOT to convince You, but to be convinced BY YOU to become the man/woman You destined me to be before the world began.  I declare that I do.  I believe what You believe about me.  I am fully persuaded that what You destined for me, You shall bring to pass in my life before I die.  This is how I know GREATER IS COMING FOR ME!  I declare this by faith.  In Jesus’ name.  Amen.

What the Resurrection of Jesus Means to YOU (Part 4: Jesus took us From Servants to Sons)