God’s Grace & Our Faith (Part 7): Faith Works By Love (Part 6) – When You Feel Like You Don’t Know What You Are Doing 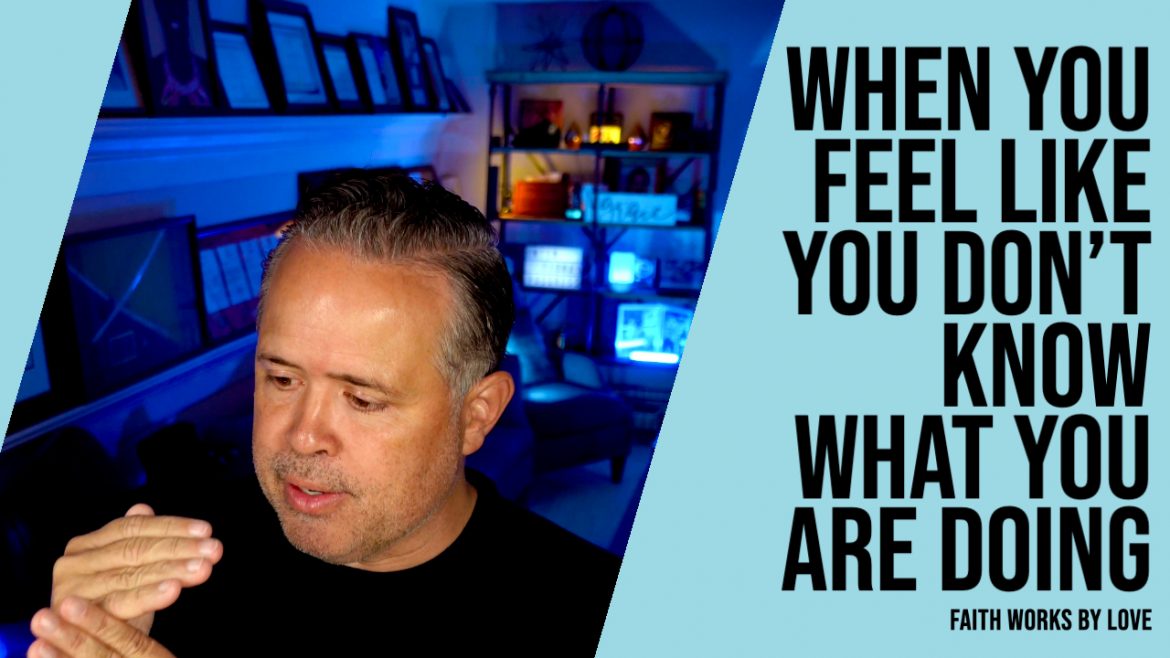 For in Jesus Christ neither circumcision availeth anything, nor uncircumcision; but faith which worketh by love.

1.  God will call you to do things you don’t know how to do to force you to rely on His grace.

I know someone who is running a business in a field that God told this person to enter, even though they knew nothing about it when they started. The person has questioned God many times, asking God to explain why He did not allow them to enter the field they had already spent 20 years in. God’s answer: “My grace is sufficient. My strength is made perfect in your weakness. If I allowed you to run a business in “your” field, you would do things without even asking me. But since I called you to do something you know nothing about, it forces you to rely on me.” You may think that sounds extreme. But there is Bible precedent for it. I will use Paul and Peter to make my point.

This is what Paul said about his call in his own words: “But even before I was born, God chose me and called me by his marvelous grace. Then it pleased him to reveal his Son to me so that I would proclaim the Good News about Jesus to the Gentiles.” (Gal 1:15,16).

Paul was born to Hebrew parents in the city of Tarsus, which is found in modern-day Turkey. In Paul’s day, Tarsus was the capital of the Roman province of Cilicia. This meant that Paul had dual citizenship. He was both a Roman and Hebrew. While his Roman citizenship gave him special privileges, he was without question raised as a Hebrew. He studied under the best teachers of the Law of Moses, and he spent his entire life, prior to coming to Christ, climbing the Jewish religious ladder.

When Paul was Born-Again, you would think that God would use him to reach those he was closest to. Paul had access to the Pharisees and Sadducees. Paul could easily get an audience with the Sanhedrin. Paul could have gone to these men and told them of his encounter with Jesus. He could have visited key Jewish leaders and shared the gospel with them.  Simply stated, Paul could have used his background, experience, and connections. However, if you look at Paul’s statement about his call, you see that God did not call Paul to the Jews. God called Paul to the Gentiles.

2.  God calls you to do things that force you to rely on His grace and NOT your ability.

b) What you feel most comfortable doing may be what you WANT to do for Christ. However, God knows that if He allows you to do what you feel most comfortable doing, then you will most likely do it in your own strength. See, when you are doing what you already know how to do, you run the risk of doing it without involving God. So God calls you to do things you are NOT comfortable with. He calls you outside of your comfort zone. He calls you to operate in realms beyond your education, to pursue deals that exceed your bank account, and to connect with people you don’t know, so are you forced to rely on Him to do what you cannot do.

c) Why your faith but be rooted and grounded in God’s love and not your performance. If it were based on your performance, your faith would fail because when you operate in this kind of “adventure” with God, there are countless moments when you feel like you don’t know what you are doing. But since your faith is rooted in God’s love, your faith will remain strong becuase you will keep reminding yourself: “I am only doing what God told me to do, and He did not send me here to fail. He loves me and this will work our for my good in the end.”

e) God wants you to accept the fact that He called you by grace, not because you are qualified to do it. He wants you to rest in the fact that He has already prepared for your success. He wants you to pursue your assignment by faith, knowing that your faith will tap into His grace along the way. God wants you to believe that He will give you the words and perform the work as you walk out your life’s assignment.  Living this way may not always be comfortable, but it is the life of faith, and it will only work when you are convinced that God loves you and that He has your best interest at heart.

f) To live by faith, you must get comfortable with a certain level of discomfort because God will not allow you to rest in your ability. God calls you to people, places, and projects that force you to rely on Him and His grace. His grace is already on you to do what He called you to do. The question now is: Will you have the faith to attempt what the Holy Spirit is leading you to do?  Will you do it, even when you are uncomfortable? Will you do it, even when you feel like you don’t know what you are doing? Will you do it, even when you are afraid of failure? If you understand what I am teaching today and you are still willing to launch out there in faith, then it must be becuase you are convinced that God loves you. If that’s you, I believe you are in good hands. You are in God’s hands, and He will never fail you. Rest in His love. Faith works by love.

I have more, but I am led to stop here for today.  I have given you enough to meditate on.  I pray you overcome your fears, you open your heart to God’s love, you enter into God’s rest, and you embrace His grace to do what He is calling you to do, even when you feel like you don’t know what you are doing!  Your faith will be strong when you are convinced that God loves you with an everlasting love.

Father, I thank You for teaching me about Your love and grace.  You love me with an everlasting love.  You made plans for me before the world began.  I was born ignorant of Your plans, so I spent years investing in a life that I desired.  Then I was Born-Again.  Now that I have Your Spirit living IN me, He reveals TO me what You prepared FOR me but was concealed FROM me.  I open my heart to what You reveal to me.  You lead me to do things I don’t know how to do.  You call me to operate on levels I don’t feel qualified for.  You grace me to enter rooms that would terrify me if it were not for Your presence.  And I embrace it all!  I don’t embrace it because I feel qualified.  Becuase, in and of myself, I don’t.  I don’t embrace it before I feel prepared.  Becuase, humanly speaking, I am not.  I embrace it ALL becuase of Your love and grace.  I believe Your grace is on me to do what I could never do without You.  I believe You are leading me to succeed and not fail.  I believe You will favor the work of my hands.  I believe You release everything I need (things that are already stored up for me) at just the right time.  And I believe all of this because I know You love me.  I live by faith, and my faith works by Your amazing and unending love towards me.  I trust You, Father, even when I feel like I don’t know what I am doing.  My total reliance is ON You and IN You!  I know GREATER IS COMING FOR ME because my life IS ALL ABOUT YOU!  I declare this by faith.  In Jesus’ name.  Amen.

God’s Grace & Our Faith (Part 6): Faith Works By Love (Part 5) – When You Are Scared You Are Not Good Enough

God’s Grace & Our Faith (Part 8): Faith Works By Love (Part 7) – Getting Over The Feeling That YOU Can’t or that You Messed Up