God’s Grace & Our Faith (Part 26): Jesus Restored Us to a Position of Power 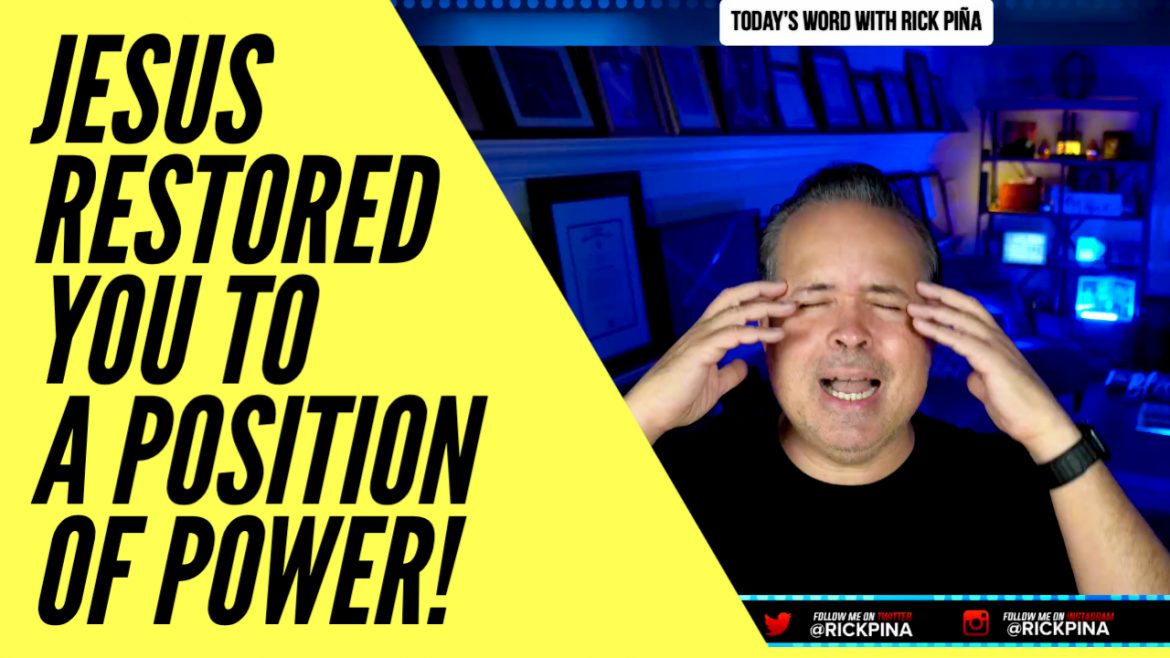 Today we will continue our series entitled “God’s Grace & Our Faith.” We are looking at The Law given under Moses vs. the Grace provided by Jesus. Our main scriptures are John 1:14 & 17. In our last message, we also looked at Galatians 5:13. We will look at these scriptures again with a message about Jesus and how He restored us to a position of power. God’s grace enables us to walk in this power.

Beloved ones, God has called us to live a life of freedom in the Holy Spirit.  But don’t view this wonderful freedom as an opportunity to set up a base of operations in the natural realm.  Freedom means that we become so completely free of self-indulgence that we become servants of one another, expressing love in all we do.

Whenever you want to know God’s original intent for something, you find where He first mentioned it in the Bible. This rule of Bible interpretation is known as the “law of first mention.” The idea is that the first time something is mentioned in scripture, it will be the simplest, most understandable reference from which the others build.

The first mention of man in the Bible is on the sixth day after God created the world and everything in it during the first five days. On that day, during the creation account, God made man in His image, He gave man kingdom dominion, power, and authority over the planet, and He charged man to rule the earth. As I stated yesterday, God would still ultimately be the ruler of the overall Kingdom, but man was supposed to rule the earth’s domain.

To make this happen, God placed His own Spirit inside of man. Adam was not under the Law of Moses. Adam was to be led by the Holy Spirit every day. The supernatural was natural to him. This is a picture of what God originally intended, and it is the picture of what Jesus redeemed us to.

2.  God created humans to be just like Him in this world.

— God created man (and when I say “man,” I am referring to male and female) to be just like Him on this planet.  As God rules from the heavens, man was created to rule this world.

— Humanity was supposed to be an extension of heaven on this planet.

— Man was supposed to be a ruler over his/her environment.

— He/she was to have dominion over the circumstances that this world presents and not the other way around.

— Satan tricked man into disobeying God. As a result, Adam and Eve were kicked out of the Garden of Eden, they lost the Holy Spirit (their direct access to God and His power), and they were resigned to living their lives as mere humans.

— God created man to be a ruler and not to be ruled. Satan made man a slave to the things God called him to dominate.

— When Jesus was filled with the Holy Spirit (which was the first human to receive the Holy Spirit on the INSIDE since Adam), the first thing the Holy Spirit led Jesus to do was to go into the wilderness to be tempted by the devil. This is what the Bible says about one of those temptations.

The devil lifted Jesus high into the sky, and in a flash showed him all the kingdoms and regions of the world. The devil then said to Jesus, “All of this, with all its power, authority, and splendor, is mine to give to whomever I wish. Just do one thing, and you will have it all. Simply bow down to worship me, and it will be yours! You will possess everything!” That’s enough for today.

Notice how satan made it clear that he had power and authority over this planet. He did. If he was lying, the temptation would not be valid. It was a valid temptation becuase satan had the power of this world. Adam lost the power. Satan took it. Jesus came to get it back! Jesus took the keys of the Kingdom BACK from satan. After His resurrection, He said, “All power is given unto me in heaven and in earth” (Matthew 28:18).

— In short, we were created to be like God on this planet. Adam had the power and authority to rule. He lost it. Jesus came to get it back. Jesus restored us to a position of power. Now, by the grace of God, we get to live as Jesus is in this world (1 John 4:17).

3.  Under the Old Covenant, the Holy Spirit lived in a tabernacle and later a temple.

When the High Priest went into the presence of the Holy Spirit, he had to make sure he did everything right. Just in case, he wore a cable-tow around his waist and bells on the edge of his garment. If he had not done everything right in accordance with the rules (The Law), he would die in the presence of the Lord. And since no one could go in there to get him, the other priests waited outside. If they heard the bells ring as he fell to the ground, they would pull him out by the cable tow. This is how regimented the system of The Law was. This is NOT a picture of what Adam had in the Garden. Jesus did not DIE so we could continue with this system. Jesus died so we could get back to what Adam had.

The day Jesus died, when He said, “It is finished!,” the veil in the temple that separated the inner court from The Holy of Holies was torn. This veil was 30 feet tall and very thick. The Bible says that it was torn from top to bottom. Not from the bottom to the top. This means that God the Father reached down Himself and ripped open the Holy of Holies. Why? Because the moment Jesus died, the Holy Spirit left that temple. The New Covenant teaches us that WE are now the temple of God and the Holy Spirit lives in us!

4.  Everything Jesus did, He did for you, to restore you to the position of power He planned for you to have.

— Jesus left heaven and came to the earth FOR YOU. He came to get you OUT OF the mess Adam got us INTO.

— Jesus died to restore you to your original position of Kingdom dominion, power, and authority!

— God never intended for you to live without power. Adam had power, and He lost it. Jesus came, as the second and last Adam, to restore divine power to mankind.

— This is why people were amazed at how Jesus operated. He was not a religious leader who was simply practicing rituals. He came with demonstration and power.

— You are supposed to have power, so you crave it internally. You were created to have it!

— It’s in your DNA to have power. Jesus came to restore man to His original intent: #DominionPower

— Jesus came so you can dominate your environment and not be dominated by it.

— No one wants to live without power. That’s why we have so many movies about witchcraft and darkness. People want power, but true POWER is found in Jesus!

— People don’t come to church just to hear someone preach; they want POWER!

— Paul understood this. This is why he said, “My teaching and my speaking were not with wise words that persuade people. But the proof of my teaching was the power that the Spirit gives. I did this so that your faith would be in God’s power, not in human wisdom” (1 Corinthians 2:4,5). Another translation says, “demonstration and power!“

— You must upgrade your expectations beyond religion. If all you have is an expectation to go to church, sing a few songs, and hang out with your friends, you are NOT fulfilling the heart of God. You are not tapping into the grace Jesus died to give you. Adam had power. Jesus had power. And now Jesus expects you to operate in His name, with the grace to flow in HIS POWER on this planet! His Kingdom has come. His will is to be done. Where? On earth. How? As it is in heaven. Through whom? THROUGH YOU, if you embrace the grace to walk in the power Jesus died to give you!

Father, I thank You for sending Jesus to die in my place.  Jesus paid the penalty for what Adam did in the Garden of Eden.  Sin and death no longer have any power over me.  I am in Christ, and Christ is in me.  I was born under the power of sin and the fear of death.  Thankfully, I was Born-Again.  I am born from above.  Heaven is now my home.  Heaven is now my reality.  I will die and go to heaven someday.  But for now, I focus on bringing heaven to the earth every day.

I have the grace to do everything I am called to do, and I rely on Your grace to do it.  Where my power ends, Your power kicks in.  I enter this day knowing that supernatural power is now natural to me.  I am naturally supernatural, I am an emissary of heaven on the earth, and I represent You, Father, in every meeting, conversation, and activity I engage in today.  Living this way, I know GREATER IS COMING FOR ME!  I declare this by faith.  In Jesus’ name.  Amen.