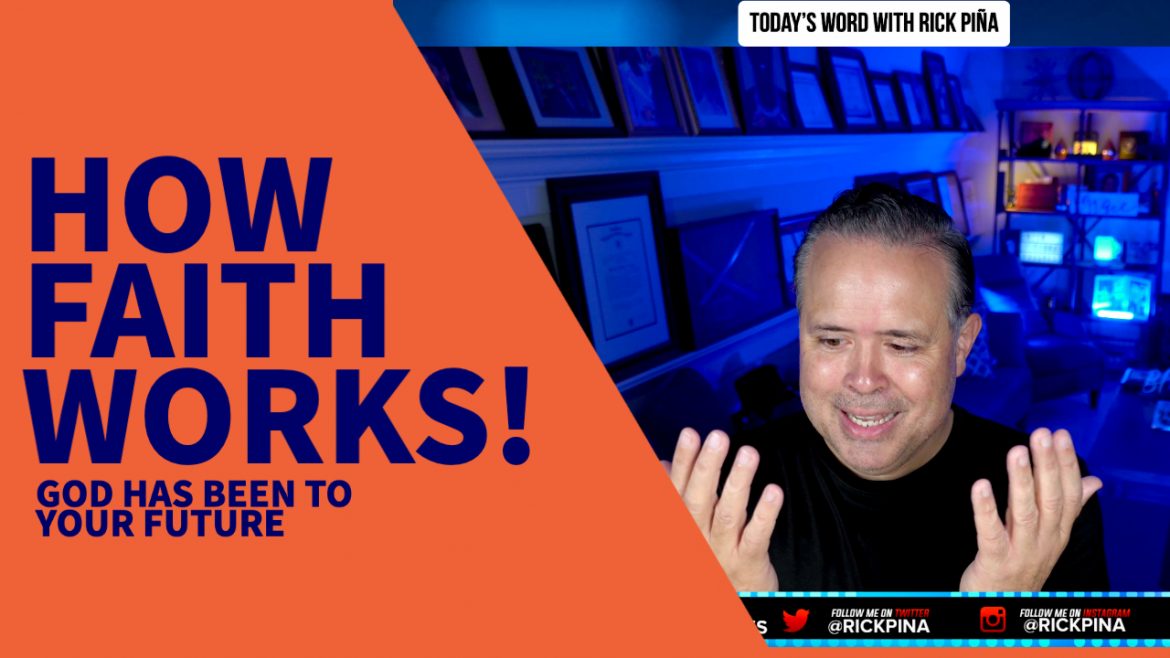 Today we will continue our series entitled “God’s Grace & Our Faith.” We are looking at The Law given under Moses vs. the Grace provided by Jesus. Our primary scriptures are John 1:14 & 17. We have also been looking at the fruit of the Holy Spirit from Galatians 5:22,23. Let’s go back to those again today.

But the fruit produced by the Holy Spirit within you is divine love in all its varied expressions:

a life full of virtue,

gentleness of heart, and

Never set the law above these qualities, for they are meant to be limitless.

So what does this mean for you today?  Yesterday I provided you with a faith refresher. This message will flow in the same vein. The key nugget I will focus on today is: God operates OUTSIDE of time, and we do not. Let’s talk about it.

1.  What is the opposite of faith?

— Faith is peering into God’s realm and then coming back to the earthly realm to live based on what God revealed.

— Faith is peering into God’s will and then coming back and aligning your will with His.

Before you were Born-Again, you lived your life based on what you were able to see in the natural and on the input your body (your earth suit) received from this world, i.e., what you were able to see, hear, touch, taste, and smell. But now that you are Born-Again, you are supposed to live your life off based on what you SEE in the Spirit and on the input your Spirit receives from God’s realm. If you can understand that, then it makes sense why the Easy To Read Version of 2 Cor 5:7 reads, “We live by what we believe will happen, not by what we can see.” Paul’s point is that, as believers, we are not supposed to live by what we can see with our natural eyes but rather by what we perceive in the Spirit.

2.  If you can see it (in the natural), meaning that it has already happened, then you don’t need faith.

Hebrews 11:1 teaches us a few things about faith:

— Faith perceives as real those things that cannot be validated with our natural senses.

— Faith adds substance to what we were previously just hoping for because faith is based on a promise or revelation from God.

— Faith is about being sure and certain that what God revealed or promised will happen becuase in eternity, it is already done, and for us, who are not eternal, it is only a matter of time.

— Every promise from God has a timing component to it. God’s promises will always manifest in His timing. The fact that we have to WAIT on God’s timing makes faith necessary. Because if God already did it, and we can already see it (in the natural and validate it with our natural senses), then faith is not required.

— You only need faith until God does it. Once God manifests what He promised, then faith is no longer required becuase faith is evidence of what we CANNOT see. Once you can see it, you don’t need faith to believe it.

3.  God speaks to us from the position (of what I call) the ETERNAL NOW!

One of the critical concepts I believe we, as God’s children, must understand is the fact that God operates OUTSIDE of time and we do not. God is eternal. One day we will be eternal as well.  But for now, while we live on the earth, we are finite and limited.

We operate within the continuum of time. God can operate in time, but He is not confined by it.  He is outside of time. God’s natural realm is eternity. So when He speaks to us, He speaks from a position a call “the ETERNAL NOW.” I will explain.

When God looks at us, He sees the entire span of our lives.  He sees what is, what was, and what has yet to be (see Ecc 3:15).  When He looks at us, He sees where we are, what His plans are for our future, and He even sees our children and grandchildren (the 2nd and 3rd generation). So when God speaks, He never speaks in the future tense.  For God, everything is always NOW. What is NOW to God is the future to us. When God says it, He speaks to us like it is already done. Because for Him, it is. But for us, who live in time, it may not happen for days, weeks, months, or years.

Faith is the ability to believe what God revealed and to them come back from that experience influenced by it. Faith is about perceiving and believing what God revealed and then about performing actions that align with what God said so God’s promises can come to pass on the earth.  When you live by faith, you are living based on a different reality. When you truly live by faith, you are not moved by what you see down here in this world. You are living by what God said.

This is why a true believer can receive a negative doctor’s report, a negative financial statement or be in the middle of a troubling situation and not be troubled by it. Why? It is because they have received a different report from God, and the report from God is more real to them than the report they received in this world. Not only that, but to live by faith, this person is able to HOLD ON to what God said until it manifests, no matter how long it takes. This is the life of faith, and it is how we are supposed to live. The Holy Spirit helps us live this way. He encourages us to KEEP ON BELIEVING when days turn into weeks, weeks into months, and months into years.  Without the encouragement of the Holy Spirit, we may give up before our TIME comes!

4.  You can be encouraged by the fact that God is incapable of lying.

When you understand that God speaks to you from the position of the ETERNAL NOW and He is incapable of lying (Titus 1:2), you quickly realize that God said what He said because in His realm (eternity), whatever He promised is actually ALREADY DONE!  This is why God spoke to Abram in the past tense, calling him the Father of Many Nations BEFORE he had any children with Sarai.

We serve a God who speaks BEFOREHAND in PAST TENSE. Because for Him, it’s already done, even though for us, it may not happen for some time.  Living by faith means the words you SAY, the actions you PERFORM, and the seeds you SOW are all based on what God revealed. Even when what God revealed is completely against everything you see around you. You cannot be moved by what you see.  You can only be moved by what God said!

5.  Jesus is a great example of living by faith.

Jesus lived by faith. This means He lived by every Word the Father revealed. He only said what He heard the Father say. He only did what He saw (by revelation) the Father do.  Jesus was willing to be in synch with heaven, even if it meant He seemed out-of-synch with the people down here, in this world. We must be willing to live the same way.

I will give you an example. Since Jesus only said what He heard the Father say, we know He was led by the Father to curse a tree. In Mark 11, Jesus was leaving Bethany on His way to Jerusalem. This particular morning Jesus got up with a purpose. His assignment for the day was to kick the money changers out of the temple area. Jesus received His assignment from the Father through the Holy Spirit and set out to Jerusalem early in the morning. He left so early that He did not eat breakfast. On the way, He saw a fig tree. He went to the tree to see if it had any figs on it. The tree had no figs. In the Spirit, He saw the tree dried up from the roots. And since faith is something you SAY based on what God revealed, Jesus said, “No man will never eat fruit from you again.” Although Jesus said it with authority and definitely, nothing happened immediately.  It did not matter to Jesus because faith is not moved by what you see. In eternity the tree was already dead. On earth, it was going to take some time.

The following day Jesus and His disciples walked past the same tree. This time it was dead, dried up from the roots. Peter remembered what Jesus said the previous day and screamed, “Master, look! Yesterday you told that fig tree to die. Now it is dry and dead!” Jesus answered, “Have faith in God!” When you live by faith, you live by what God is saying, not by what you are seeing!

— The Holy Spirit will reveal things that are “past” to Him and “future” to us.

Father, I am a believer and not a doubter. I walk by faith and not by sight. Like Jesus, I only say what I hear You say. I only do what You reveal to me that You want to be done.

I am not living by the same reality as the people in this world. I live by faith. This means that I live by Your reality, even when the earth has not caught up yet.

I live by every Word You speak to me, even when what I see down here, in this world, is telling me something different. I am not moved by what I see. I am only moved by what You say.

I live in sync with heaven, even if it means I seem out-of-sync with what is happening in this world. I live by faith, led by Your Spirit in all things, even at the risk of looking foolish!

You are in eternity. I am in time. It is only a matter of time before I see, in my hands, what You revealed, in my heart. Living this way, I know GREATER IS COMING FOR ME! I declare this by faith. In Jesus’ name. Amen.

This is Today’s Word! Apply it and Prosper.