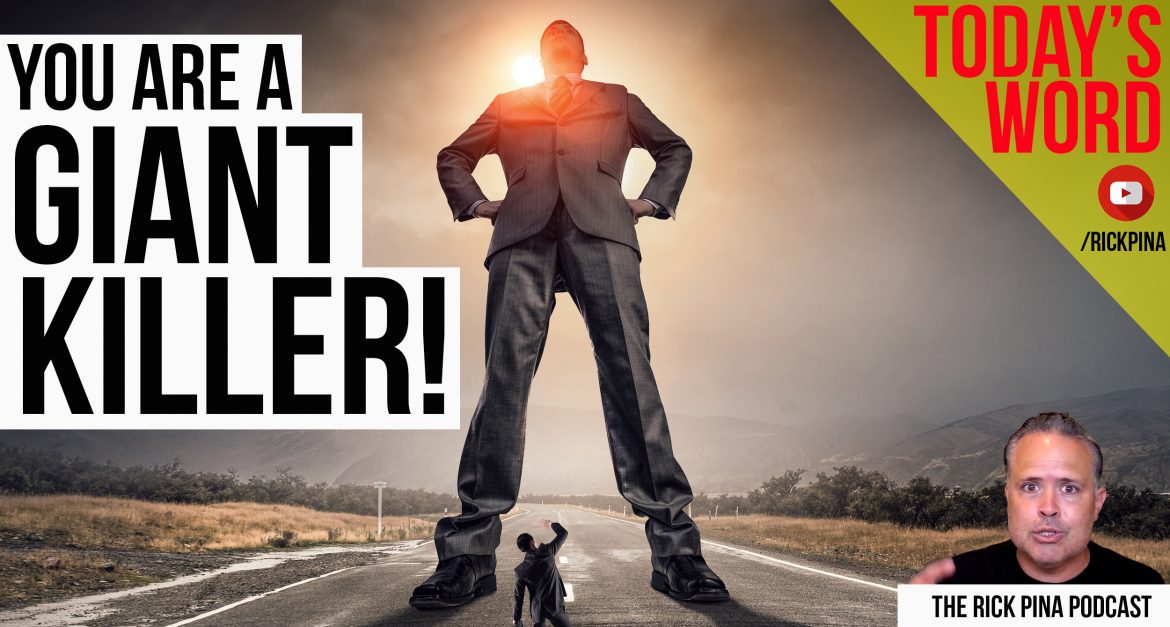 Today I will continue with “Faith and Patience Volume 5 – Greater is Coming!”  We are studying the life of David.  Today we will cover 1 Samuel 17:41-47.

As we go back to David’s story, we find him walking into the valley to face Goliath.  Picture the scene upon the canvas of your mind.  Two armies face each other from adjacent mountain tops.  Only one representative from each army enters the valley that separates them.  From the Philistine side, a giant proceeds, clothed with armor head-to-toe. Trailing the giant is his armor-bearer.  The armor-bearer is carrying a shield so big that it requires a second man to tote it around.  With the giant in place, someone proceeds from the Israelite side.  It is clear that he is no giant, and he is wearing no armor.  He is more dressed like he is ready for chores than for battle.  He does not have a sword, and he has never trained with one.  All he has is a shepherd’s staff, a slingshot, and five smooth stones.  But wait, I forgot to mention that this little boy does have something else… he has the grace of God all over him.  A few weeks earlier, he was a nobody from nowhere.  Now this young man is representing his entire nation in battle.  The weight of the nation is in his hands, and his hands are in God’s hands.  That’s the scene, so now let’s pick up the story.

Goliath walked out toward David and sneered in contempt as he looked at his opponent.  Goliath asked, “Am I a dog, that you come at me with a stick?”  Goliath then cursed David by the names of his gods.  However, Goliath had no idea that he could not curse what the only true God had already blessed.  Goliath went on to yell, “Come over here, and I’ll give your flesh to the birds and wild animals!”  David was unphased.  Unlike Saul and his men, David did not allow Goliath’s threats to strike fear in his heart.  David replied, “You come to me with sword, spear, and javelin, but I come to you in the name of the Lord of Heaven’s Armies—the God of the armies of Israel, whom you have defied.”

For David, this more than just a one-on-one, hand-to-hand combat showdown.  This was how Goliath had disrespected his God.  David was God’s emissary and he was going to let everyone present that day know what happens when you defy the God of Israel.  So with his faith firmly rooted in God, David said, “Today the Lord will conquer you, and I will kill you and cut off your head.  And then I will give the dead bodies of your men to the birds and wild animals, and the whole world will know that there is a God in Israel!  And everyone assembled here will know that the Lord rescues his people, but not with sword and spear.  This is the Lord’s battle, and he will give you to us!”  We will stop here for today.

1.  While you are waiting on your ultimate purpose, you must make the most of what is in front of you.

David was called by God to be the King of Israel.  This was ultimately his purpose.  However, it would take years for the promise from God to come to pass.  In the interim, David had to make the most of every situation, knowing that God was taking him incrementally closer to the promise with each passing day.

When you know what you are born to do, the sense of purpose it creates in your heart is amazing.  You look in the mirror, and you see yourself the way God sees you.  Your purpose gives birth to vision, and the vision God floods your heart with informs your decisions and actions.  Further, your divine identity gives you a level of confidence that that is unshakable.  The hard part is waiting on God.

David was called to be King.  Ever since he received the calling, his life was not the way it used to be.  But it was also not the way the prophet said it would be.  So he was somewhat caught in “limbo.”  He was stuck between his history and his destiny.  I know what this feels like.  I think we all do.  When you know God has called you to something and His calling has shifted your life to the point where you are no longer who you used to be, but you are also not he person God called you to be yet.  So what do you do in the interim?  Let’s take our cues from David.  We are to make the most of every situation, as they present themselves.  We may not have all the answers.  We may not know how everything is going to play out.  But if we keep following God, He will lead us day and day, and one day we will wake up and realize that God’s dream has come to pass in our lives!  This is the life of faith.

— While you are walking out your purpose, you are going to face challenges.  As you do, remember, fear is not the will of God.

— When you know who you are in Christ Jesus, and you are convinced that God loves you, you can attest to what the Apostle John said, “Perfected love casts out all fear!”

— A king and an entire army were afraid of a man (Goliath).  But a shepherd boy (David), anointed by God, looked at the giant through the lens of faith, and he knew he had nothing to fear.

— When you look at any situation from God’s perspective, you will quickly realize that you have no reason to fear.  There is nothing God can’t do and He is the one who lives IN you!  What is possible for Him (all things) is possible for you!

— Right now, we are still dealing with a global pandemic.  Millions have lost their jobs.  Countless businesses have closed, and others are struggling to stay open.  This is a season when the devil is busy stirring up fear, doubt, and unbelief in many.  Don’t let this be you!  You keep your eyes and your heart fixed and focused on God.  When facing the giant, David said, “The same God who delivered me from the mouth of the lion and the claws of the bear will deliver me from this uncircumcised Philistine.”  Allow David to encourage you.  You have been through too much with God to allow fear to fill your heart now.  Open your mouth and say, “The same God who saw me through __________ and through __________ will deliver me from COVID-19 and this season in general!”

3.  You are called and commanded to live a life of faith.

— David understood that God had a part, and he had a part.  God’s part was to kill Goliath.  This was David’s acknowledgment that he could not do it without God.

— Some things are beyond your ability to perform.  David acknowledged that.  This is why he said the Lord would kill the giant.  But that does not mean that we are supposed to sit around and wait for the Lord to do it FOR us.  NO!  Faith means that God does it THROUGH us!  David went on to say, “and I will kill you and cut off your head!”  When you live by faith, YOU ARE THE ONE who has to GO and DO what the Lord is leading you to GO and DO, fully expecting that HE WILL DO IT THROUGH YOU as you go!

— If God leads you to do something that is clearly beyond your natural ability, it is because He wants to flex His muscles through you.  He does this so He can get the glory!  Let Him!  Have faith in God’s ability.  You submit, and He will conquer!  You allow Him to lead you, and He will perform things through you that you never thought possible.

— The impossible becomes your reality when you die to self, yield to God, and allow Him to live through you.

— God lives IN you.  It’s time for you to get out of the way and LET HIM OUT!  God wants to be seen, heard, and felt in your daily routine.  If you allow Him to, you will be amazed at the giants you kill and the life you live!

Father, I expect You to do ALL You planned to do in my life before I was born.  I cooperate with You and Your plans, so You are free to operate through me.  I enter this day, ready to slay any giant that is foolish enough to stand before me.  By Your Spirit, I can see the invisible and perform the impossible because it is You Father, who lives in me.  You give me the words, and You perform the work through me, and people take notice.  They notice what I am doing and how I am doing it, which is why I am quick to give You the glory for my life and living.  Living this way, I know GREATER IS COMING FOR ME!  I declare this by faith. In Jesus’ name, Amen!

Greater Is Coming (Pt.16) Your Life is for God’s Glory!