Progress on Purpose: The Highest Form of Faith (Part 3) 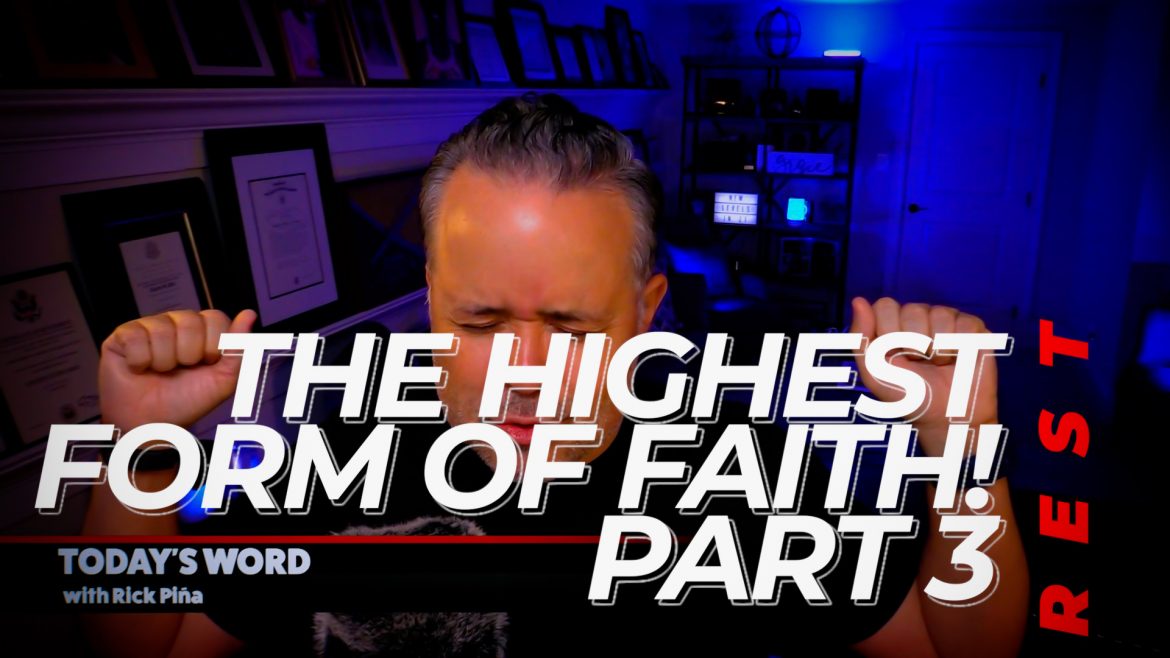 We have covered the first three thus far.  Today we are looking at the fourth: Leveling up internally.  In this section, I will cover the following:

1.  Being anxious for nothing

3.  Joy and peace in believing

4.  Relaxing your mind and getting physical/psychological rest

5.  The highest form of faith is rest

We have been dealing with entering into God’s rest for a few days.  This message will flow in that same vein.

1.  Initially, Abraham DID NOT REST in God’s Promise and it COST HIM!

God gave a promise to Abraham.  Abraham believed that promise.  He believed it so much that he was willing to leave everyone he knew in order to become the man God was calling him to be.  He, his wife, and his nephew took off in faith.

God promised to bless Abraham, to make his name great, and to bless all the families of the earth through him.  10 years later, Abraham and Sarah were blessed with cattle, silver, and gold.  The Lord had made them very rich.  However, they still did not have any children.  Sarah was getting older day by day.  She was 75 years old and she could not have any children, even when she was 18.  I can imagine some of the conversations in their tent:

“Babe, we are not getting any younger.  This is taking too long.”

“Babe, I appreciate the fact that God has given us all this money.  But we still don’t have any kids.”

Abraham (as a man), liked that idea, he had sex with his servant, and they had a son.  The problem is that this boy was NOT what God promised.  This caused a rift between the two women, and the rest is history.  The boy wound up becoming the father is Islam, and the rift between Muslims and Jews happened because Abraham and Sarah failed to enter into God’s rest.

Here are some takeaways from this:

— If you fail to enter into God’s rest where God’s promises are concerned, you will eventually come up with a PLAN B.

— If you do something on your own, you are going to have to deal with the consequences.  You may not lose the promise (Abraham and Sarah still had Isaac), but failing to operate in faith WILL COST YOU!

Making it personal.  I have something God spoke to me many years ago that has not come to pass yet.  While I am waiting on God to do what He said He would do, I am very appreciative of everything He has done and is doing in/with/through my life along the way.  Isabella and I are blessed.  I can say we are very blessed, without question.  But while I am thankful for God’s blessing, I refuse to lower my expectation.  I will never stop believing God for what He put in my heart.  I live with an expectation to see the manifestation of everything He promised while I am on the earth before I die!  This is the life of faith!

2.  You can live natural (to this realm) or spiritual (natural to God’s realm).

21  Some of you people want to be under the law. Tell me, do you know what the law says?

22 The Scriptures say that Abraham had two sons. The mother of one son was a slave woman, and the mother of the other son was a free woman.

24 This true story makes a picture for us. The two women are like the two agreements between God and his people. One agreement is the law that God made on Mount Sinai. The people who are under this agreement are like slaves. The mother named Hagar is like that agreement.

25 So Hagar is like Mount Sinai in Arabia. She is a picture of the earthly Jewish city of Jerusalem. This city is a slave, and all its people are slaves to the law.

26 But the heavenly Jerusalem that is above is like the free woman, who is our mother.

28 My brothers and sisters, you are children who were born because of God’s promise, just as Isaac was.

29 But the other son of Abraham, who was born in the normal way, caused trouble for the one who was born by the power of the Spirit. It is the same today.

Paul paints two pictures for us.

— You have to make a decision how you are going to live!

— Do you have to live NATURAL, like a mere human?  Or do you have the faith to live the SUPERNATURAL life God has called you to?

Living Supernatural DOES NOT MEAN YOU DO NOTHING!

— It just means you know you are not working for it.

— You are doing whatever the Father tells you to do.

— You are saying whatever the Father leads you to say.

— And you TAKE ON NO PRESSURE to Perform!

— You pray.  But YOU DON’T pray FOR the VICTORY!  You pray FROM A POSITION OF VICTORY!

— You work.  But YOU DON’T work to MAKE IT HAPPEN!  You WORK KNOWING it has ALREADY HAPPENED!

— You are fully persuaded of God.  Therefore, YOU CAN REST!

3.  Rest is a choice, a decision you make, and a posture you maintain.

If you are going to do all the work and rely on your human strength and ability, then you are basically blocking God out of your life.  If you choose to live this way, God will stand by and rest while you work.  But if you embrace the grace of God and take God up on His offer to enter into divine rest (see Heb 4), then God will perform the work in your life.  God will work through you to do what you could never do on your own.  Simply put: If you do all the work, then God will rest, but if you enter into divine rest, God will work.  Which will you choose today?

When you are IN-FAITH you can rest to the point where you sleep through a storm.

— Your focus is not on the storm.

— You are not moved by what happens.

— You become what you behold.  What are you beholding?

Father, I walk and live by faith.  I believe and receive everything You promise me, and I refuse to do anything else.  I have NO PLAN Bs in my life.  I stand in faith, no matter how long it takes.  I am not moved from my position, my stance, my belief.  I fix and focus my eyes on You and on the promises You made me.  I am so persuaded by what You said that I enter into Your rest.  I am steadfast in my commitment to rest.  So much so that I can sleep through storms.  Living this way, I Level Up my life in 2021!  GREATER IS COMING FOR ME!  I declare this by faith, in Jesus’s name.  Amen!

Progress on Purpose: The Highest Form of Faith (Part 2)

Progress on Purpose: The Highest Form of Faith (Part 4)