Greater Is Coming (Pt.65) Breakthrough Can Happen At Any Time 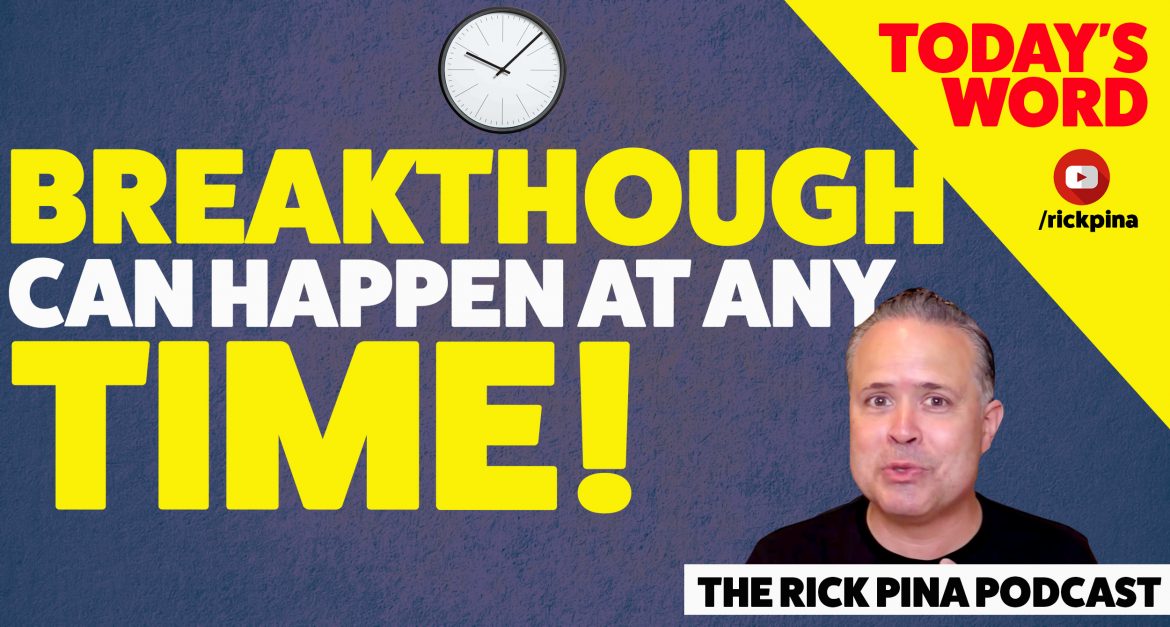 Today I will continue with “Faith and Patience Volume 5 – Greater is Coming!”   As the war between the house of Saul and the house of David continued, General Abner, who had been a powerful leader well before David was even called out of Jesse’s house, became an even more powerful leader among those loyal to Saul.  Remember, this man had so much influence that he single-handedly lobbied to make Saul’s son Ishbosheth the king of Israel after Saul’s death, and he was successful in doing so.  If it were not for Abner, Ishbosheth would not be king, and David would not be waiting.

It is clear that General Abner had power and that his relationship with King Ishbosheth was solid because he basically put him there.  But one day, King Ishbosheth’s relationship with Abner took a turn in the wrong direction when the king accused the general of sleeping with one of his father’s concubines, a woman named Rizpah.  Abner was offended and furious.  Abner shouted to the king, “Am I some Judean dog to be kicked around like this?  After all I have done for your father, Saul, and his family and friends by not handing you over to David, is this my reward—that you find fault with me about this woman?  May God strike me and even kill me if I don’t do everything I can to help David get what the LORD has promised him!  I’m going to take Saul’s kingdom and give it to David.  I will establish the throne of David over Israel as well as Judah, all the way from Dan in the north to Beersheba in the south.”  The king realized he had put his royal foot in his mouth and he didn’t dare say another word.  Although he was the king, he knew Abner had the power.

Abner sent messengers to David, saying, “Doesn’t the entire land belong to you?  Make a solemn pact with me, and I will help turn over all of Israel to you.”  King David knew the influence Abner had, so he agreed to the arrangement, but with one stipulation.  David wanted his first wife, Michal, the daughter of Saul, back.  Remember, since Saul was upset with David, he made his daughter leave him and marry another man.  Even though David had moved on and had six sons from several wives, he still loved Michal and he wanted her back.

David sent this message to Ishbosheth: “Give me back my wife Michal, for I bought her with the lives of 100 Philistines.”  King Ishbosheth was under so much pressure that he did not know what to do.  He did not think he was in any position of power anymore, so he quickly agreed to David’s request.  He took his sister away from her [then] current husband and sent her back to her original husband (David) with Abner.  On the way, Abner wasted no time.  He started lobbying for David.  The General met with several of the elders of Israel and told them, “For some time now, you have wanted to make David your king.  Now is the time!  For the LORD has said, ‘I have chosen David to save my people Israel from the hands of the Philistines and from all their other enemies.’”  The man who was once David’s most staunch enemy was now his biggest supporter.

1.  Pressure can burst a pipe.

— In yesterday’s message, I shared with you that the Bible says, “As time passed, David became stronger and stronger, while Saul’s dynasty became weaker and weaker.”  With each passing day, David was growing, and Ishbosheth was diminishing.  Both were getting incrementally closer to the “end” that was awaiting them.

— In the case of Ishbosheth, since he was not aligned with God’s will, the pressure was mounting on him day by day.  As humans, we are not designed to deal with overwhelming pressure.  There are some things we must learn to CAST over to God.  If we don’t, the pressure can mount, and the stress can cause us to crumble.

— In the case of Ishbosheth, the pressure was mounting, the stress was increasing, and is often the case in those types of situations, his world imploded.  He went against the ONE MAN who placed him in power, and that man vowed to hand his Kingdom over to David.

Here are a few quick lessons to learn here:

— You were not designed to carry the pressures of this world without God.

— If you don’t learn how to tap into the grace of God, the pressure/stress of this world can destroy you.

— When you are stressed, you don’t think straight.  As a result, you make poor decisions.

— If you want to walk with God for the long haul, you are going to have to learn how to tap into His grace and enter into His rest.  If not, the pressures of this world will cripple you before you fulfill your destiny.

2.  Things can change for you at any moment.

— David did nothing to initiate this turn of events.  While David minded his own business, trouble arose in the enemy’s camp, and it worked out for his good.  The same can happen for you.

— While you mind your own business, being faithful to God to do what He has set before you, events can change quickly in your favor, bringing into manifestation what you have been waiting for.

— Remain faithful and keep your expectations high.  Your change can come when you least expect it.  It can literally happen at any time!

— While you are RESTING on God, taking on no pressure, and rejecting all stress, make sure you keep your heart OPEN to receive.  You don’t want to miss your opportunity when it comes!  It can happen at any time!

3.  God will give you help from the most unlikely people.

— One of David’s most staunch enemies, General Abner, turned into his greatest supporter overnight.

— David’s son, Solomon, would later teach us that something similar can happen to us.  Solomon said, “When a man’s ways please the LORD, he makes even his enemies to be at peace with him.” (Prov 16:7).

— No matter how hard a person’s heart is towards you, God has a way of turning people’s hearts, and those who have been against you for years, can wind up supporting you for the rest of your life.

— The point is that God can give you favor, by grace, to the point where even your enemies wind up working for your good.

— Never close the door to God’s possibilities.  David could have said “NO” to Abner’s help because of all the trouble Abner had caused him in the past.  But when the winds of change were blowing, David kept his heart OPEN to help, even if it was coming from a previous enemy.  Never limit God.  There is NOTHING God can’t do!  He can use ANYONE to bless you.  So please be OPEN to to the help, when He sends your prior enemies to be your supporters!

— We serve a God who can turn a HATER into a HELPER!

4.  God has a way of resurrecting dead dreams.

— By 2 Samuel 3, it seemed like a lifetime since David had been married to his first love, Michal.  Saul separated David and Michal, both remarried, and both seemingly moved on with their lives.  But after about 10 years, in the midst of events that seem better placed in the script of a Soap Opera than in the pages of the Bible, David and Michal were reunited.

— The message here is that it is never too late for God.  No matter how dead the dream seems, we serve a God who can resurrect dead dreams and turn seemingly hopeless situations around!

— God will instigate a reassurance of belief for something you had given upon on, simply because He never gave up on it for you!

— God is more committed to you and the promises He made to you than you are to yourself.  God will bring something up that you forgot about, just to remind you that He is STILL GOING TO BRING IT TO PASS!

— The Bible says, “For God’s gifts and his call are irrevocable.” (Romans 11:29).  You can move on in your heart.  You can forget about what God said.  You may even feel like you have disqualified yourself because of all the mistakes you have made.  But if promised it to you, believe me, the promise is still good.  He may bring it up 20, 30, 40 years later, just to remind you that He is STILL going to do what He said!

— While you read this last point, God may have reminded you of something you forgot about.  It was something He promised you that you used to believe Him for.  Along the way, you stopped believing.  But God never stopped.  He brought it up to you today to remind you that He is STILL GOING TO DO IT!  It’s like the conversation God had with Abraham when he was 99 years old, and his wife was almost 90.  God basically said, “After all these years, you are STILL GOING TO HAVE THAT BABY!”

*** We serve a God who will RESURRECT dead dreams and dead hopes.  Because while you gave up on Him, He never gave up on you!

Father, I thank You for Your overwhelming grace, goodness, kindness, and mercy towards me.  You are better to me than I am to myself.  You are faithful to me, even when I am not faithful to You.  Thank You!  As I walk by faith to access the grace that is on my life, I thank You for providing breakthroughs for me when I least expect it.  You give me favor with unlikely people.  You turn haters into helpers.  You can turn my biggest enemy into my biggest supporter overnight.  You also resurrect dead dreams, hopes, and desires.  You give life to dead situations!  You bring things up that I had forgotten about, just to remind me that Your promise is still good, and You are still going to bring it to pass.  Thank You, Father, for never giving up on me, even when I have given up on You.  It is Your commitment to me that has me convinced that GREATER IS COMING FOR ME!  Breakthrough can happen AT ANY TIME!  So I enter this day with my heart OPEN to receive!  I declare this by faith.  In Jesus’ name, Amen!