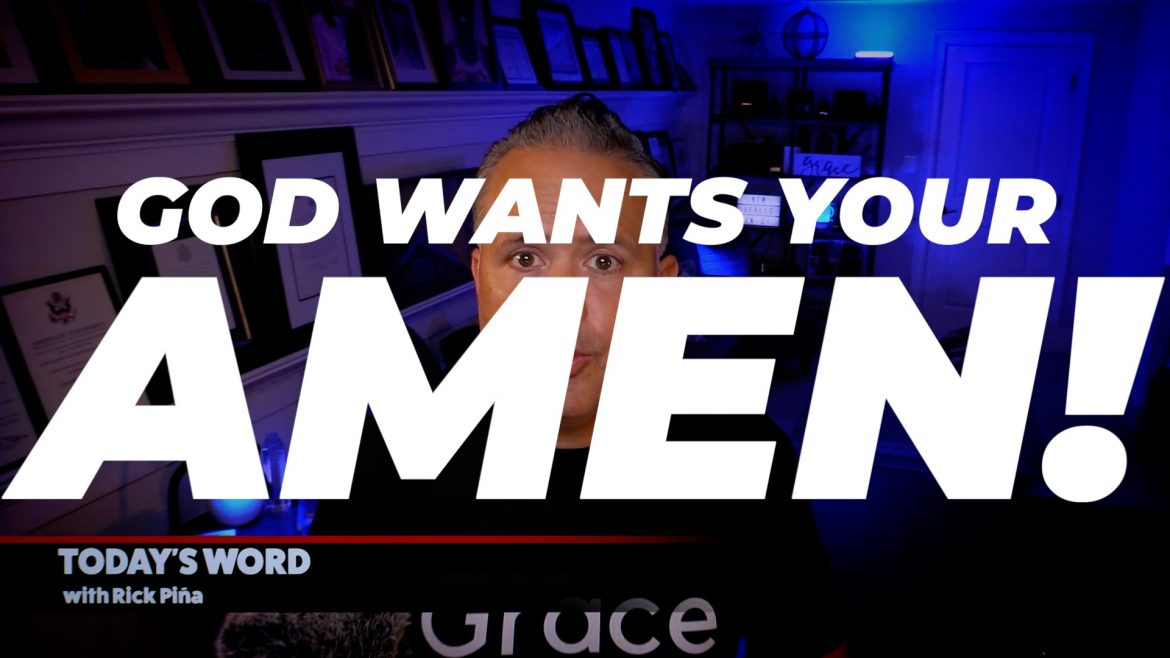 Monday, I started a new series entitled “God is faithful!”  I shared with you that Sunday, while I was in church, the worship team sang “Yes and Amen” by Bethel music.  Here are some of the lyrics that I kept meditating on from that song:

Faithful, forever, You will be

All Your promises are Yes and Amen

All Your promises are Yes and Amen

The song is based on 2 Corinthians 1:20.  We looked at this verse yesterday.  Let’s go back to it again today and take a deeper look.

For no matter how many promises God has made, they are “Yes” in Christ. And so through him the “Amen” is spoken by us to the glory of God

For all of God’s promises find their “yes” of fulfillment in him. And as his “yes” and our “amen” ascend to God, we bring him glory!

1.  God is looking for your cooperation.

For God to OPERATE in and through us, we must CO-OPERATE with Him.  God will not force Himself upon you.  God’s involvement in your life, in whatever area, must be an act of your free will.

Think about it this way.  God is sovereign, and in His sovereignty, He created humans as free moral agents.  Let’s think about this for a moment.  God can do anything.  He is God!  But:

— if God forced you to repent of your sin and accept Jesus as Lord, then HE would be picking who goes to heaven and who goes to hell!

— if God forced you to pray, to ask Him for things, or to petition for His involvement, then He would be basically agreeing with Himself because the petitions were not birthed in your heart.

The bottom line is, while God can do whatever He wants because He is God, He has chosen to allow humans to run this planet.  He set up a system of cause and effect, sowing and reaping, and the free will of humans.  So while it is true that God made plans for you before the world began, it is also true that God is seeking your cooperation with those plans.  If you don’t cooperate, God won’t operate through you.

— God has provided the “YES” associated with every promise He has spoken to you while you have been working with Him.

— God has provided the “YES” associated with every aspect of the plans He made for you before the world began.

— God made plans, and He already said “YES” to the plans.  Now what God is looking for from you is an “AMEN!”

— All God’s promises are YES and AMEN!  The YES comes from Him.  The AMEN comes from us!

2.  God is looking for you to agree with Him IN FAITH.

In  yesterday’s message, I made the following statement:

“For years, my understanding of faith was flawed.  Based on the way I was taught when I was first Born-Again, I thought I could “name and claim,” “believe and receive,” and “decree and declare” whatever I wanted, just as long as I released my faith for it in my heart.  Sometimes it worked.  Many times it didn’t.  The problem with my approach at the time (this is my experience, and I am not going to talk about others) was that there was too much humanity in it.  I was selfish, making a demand on God for whatever I wanted, and I thought that was faith.”

I am led to add to this statement today.  To be clear, I still believe the following:

— God is looking for us to openly declare what He has already decreed over our lives.

— The power of death and life are in the tongue.  With our tongue, we either release life or death, blessing or cursing.

— Good or bad, we are going to have whatsoever we say!

— We serve a God who calls those things which be not as though they are, and He expects us to do the same.  God wants us to SAY what He said until we SEE what He said!

— God wants us to SAY what He reveals to us in the Spirit, even when it goes against what we are SEEING in the natural.  We cannot be moved by what we SEE.  We can only be moved by what God said!

— One of the ways that you release your faith is with your mouth!  God wants you to openly declare what He said to you, taking Him public, at the risk of looking foolish because this is a major aspect of the life of faith.  If you are too afraid or too ashamed to SAY it, then you are not ready to RECEIVE it!

I am adding some clarification here.  While some believers have looked down on those who “name and claim,” “blab and grab,” or “believe and receive,” I am just making it clear that God certainly wants us to align our lips with what He reveals to us in our heart.  The distinction is that we are not free to name or claim anything we want.  God never signed up to give us whatever we desire.  God has obligated Himself to provide according to His plans and purposes for our lives.  So when God gives us the desire, and we openly declare it, then yes, we are setting our faith in agreement with God.  However, if we come up with the desire on our own, we can name, claim, and declare all we want, but it won’t move God.  We cannot force God to give us something He did not already plan to do in our lives.

When you understand all of this, you understand our text.  God has already said “YES” to His promises.  Everything God has spoken over you has a “YES” on it.  Now God is looking for you to say “AMEN” to it, no matter how crazy it seems!

— David had to say AMEN to believing that he would become the King of Israel, when he was a no-name shepherd boy.

— Joseph had to say AMEN to a dream God put in his heart, that he would rise above his brothers and even his father, when he was the 11th of 12 boys.

I could go on, but I believe you get the point.  God wants your AMEN!  Actually, He needs it because, without it, He won’t operate in your life.  If He did, He would be going against the system of free will that He set up for this planet.  God has already said YES to His promises for you.  Your part now is to say AMEN!

Father, I thank You for leading me to LEVEL UP in this season.  You have specific promises for me for this season.  These promises have come with a “YES” from You!  You have already said, “YES!”  Now I say, “AMEN!”  I put an AMEN on every promise.  I set my faith in agreement with You.  On earth, I agree with heaven.  Living this way, I experience heaven on earth!  GREATER IS COMING FOR ME!  I declare this by faith. In Jesus’ name, Amen!

Put An AMEN On It!

How to Glorify God on the Earth