Greater Is Coming (Pt.69) Be Willing To Fight For It! 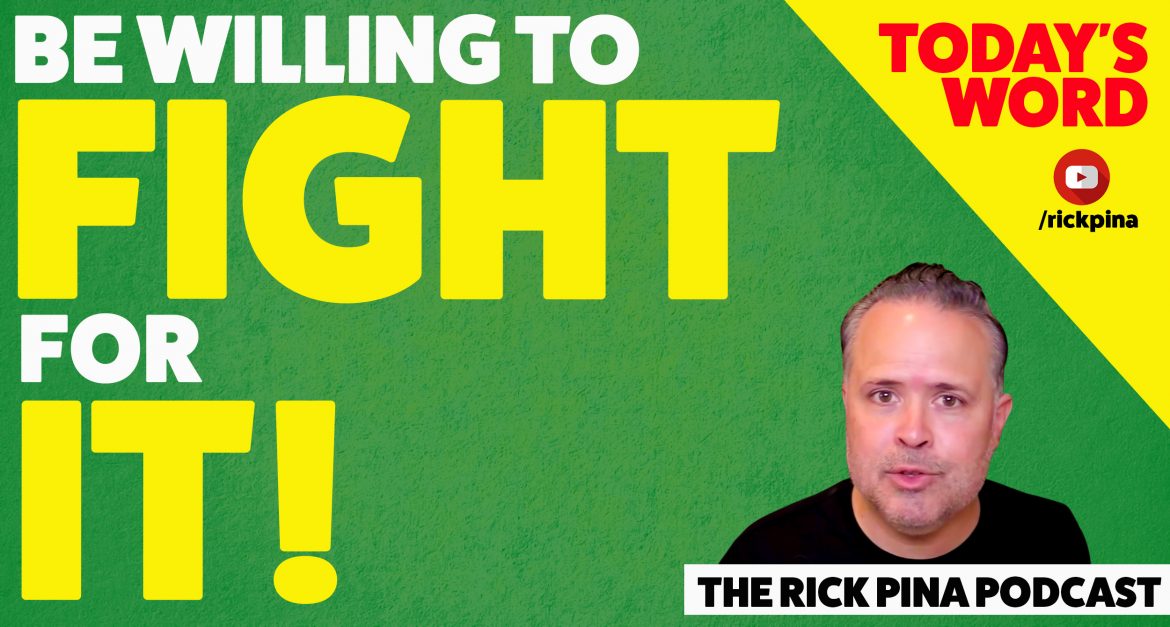 Today I will continue with “Faith and Patience Volume 5 – Greater is Coming!”  After the elders of all the tribes anointed David as King over a united Israel, his next stop was Jerusalem.  David had been reigning from Hebron, but he wanted to move his headquarters to Jerusalem.  The problem was, however, that Jerusalem was occupied by the Jebusites and they would not give up the city without a fight.  Just like what happened with Canaan many years prior, God had given them the territory, but it would not come without a fight.  Although the grace was on them to take possession of Canaan (initially) and Jerusalem (in this case), God’s grace being available did not mean the land would be handed to them on a silver platter.  Not only were the Jebusites ready to fight, but they actually taunted David, saying, “You’ll never get in here!  Even the blind and lame could keep you out!”  David would make the Jebusites eat those words.

David and his men captured the fortress of Zion, which is now called the City of David.  David made the fortress his home, and he then extended the city, starting at the supporting terraces and working inward.  The Bible says, “David became more and more powerful because the LORD God of Heaven’s Armies was with him.”

After the battle, the Lord gave David favor with King Hiram of Tyre.  King Hiram sent messengers to David, welcoming a partnership.  He also sent cedar timber, carpenters, and stonemasons to build David a palace.  After this, the Bible says, “David realized that the LORD had confirmed him as King over Israel and had blessed his kingdom for the sake of his people Israel.”

1.  Sometimes, things will be handed to you by grace and favor.

— Once David secured Jerusalem, King Hiram took it upon himself to send cedar timber, carpenters, and stonemasons to build David a palace.  This was unsolicited.  It came to David by grace and favor.

— I love it when things work out this way.  I wish this were the ‘default’ way to walk with God, but we all know it is not.

— On those occasions when God gives us favor with others, and they simply hand us a blessing on a silver platter, it sure is nice.  Appreciate it.  Receive it.  Give God praise for it.  But don’t think it will always come this way.  More often than not, you will have to fight for what God is giving you!

2.  Sometimes, you will have to tap into the grace to fight.

— Unlike the favor David experienced with Tyre, the Jebusites were not giving up anything to David without a fight.

— If David wanted Jerusalem, he was going to have to fight for it.  So he fought and won because the Bible says, “The LORD God of Heaven’s Armies was with him.”

— The point is that sometimes your blessing will be handed to you.  Other times, you will have to fight for it.  Either way, the grace of God is on you for it.

— In one case God will lead you the grace to accept the gift humbly and gracefully, without crossing over into pride.  In the other case, God will give you the grace to fight for what He wants you to have.  Either way, God’s grace is in operation.

— If the door swings wide open for you, and God graces you to walk through it sweatlessly, then thank Him for it.  But if the enemy shuts the door in your face, and the Lord leads you to kick it down, then know you have the grace to do that as well.  In this case, you will have to fight for it.  Since God is with you, you will fight and win.  When you do, make sure to give God the glory for the victory!  Our God is still a jealous God.  He reserves all the glory for Himself.  Never take credit for something He did!

— David was far from perfect.  But he was always quick to give God the glory!

— David’s purpose in life was to lead Israel.  Everything David had been through — Goliath, the cave, life on the run, the fights, the heartaches, the pain, and the victories — was all designed to get him to the point where he could serve the people of Israel.

— You are not on the earth to simply breathe in and blow out air for a period of time, go to a few parties, have a little fun, and then die.  No, our God is completely purposeful.  He sent you to this planet when and where He did, because of WHY He did!

— You are here on purpose, and the Father expects you to live with a purpose.

— God’s purpose is always bigger than you.  Your life is not just about fulfilling your pleasures and selfish desires.  Your life is about making the impact you were born to make.

— As you live out your life’s purpose, God will lead you down paths you did not want to go, and you will face challenges you do not want to face, but remember, it is not just about you.  When you have the time to look back you will realize that those paths were designed to help you BECOME a blessing to others.

— God is too big of a God, and your purpose is too big of an assignment for God to JUST be concerned with you.  When God looks at you, He sees you, your children, your children’s children, and all the impact He destined you to make from the foundations of the world.  When you think of it that way, you realize why God is not moved by your tears when you are upset about something you are facing at the moment that has no eternal significance.  God was not moved by the pain David went through to become King of Israel.  Because He needed David to be ready for his assignment so that he could leave the mark on this world he was destined to leave.  The same can be said for you!

— If you are facing what you consider to be a big challenge today, take a step back for a moment.  Think about your divine purpose and how God weighs things with eternal significance.  Meditate on that for a while.  After your meditation, your problem may not seem as big anymore because you realize that your life is about something far greater than your comfort.  You are on this planet for God’s purpose.  Never forget it!

— As I close, take a moment to open your heart to God.  Ask the Holy Spirit to help EXPAND your capacity to believe God, so you can focus on the impact you were born to make in this world before you die!  It won’t always be easy, but it will be worth it.

Father, I thank You for the many times where you give me favor with others.  You are able to move upon the hearts of others to the point where they willingly use their power, ability, influence, and money, to help me in ways I cannot help myself.  You bless me beyond measure, and when you give me favor with others, the blessings come in a sweatless and effortless manner.  I welcome the blessings that come to me freely, and I accept them in a graceful way.  It’s not about me; it’s all about You!  I keep a proper perspective so I can enjoy your best without crossing over into pride.

Father, on those occasions, when the blessing does not come without a fight, I know You also give me the grace to fight.  If the enemy shuts the door in my face and You lead me to go through it, I kick it down by Your grace and with Your divine power.  I am not afraid of the devil, any demon or demonic influence.  Neither am I afraid of any man or of human strength.  My trust and confidence is in You.  If you lead me to fight, I fight for what You desire for me to have, and I fight with bulldog-tenacity.

Lastly, Father, I don’t pursue Your best for selfish reasons.  I am on this planet for Your divine purpose.  I am determined to maximize the purpose, and potential You placed in me, and I will get it done while I am in the land of the living.  By Your grace, I will leave a mark on this world that will not easily be erased.  GREATER IS COMING FOR ME!  I declare this by faith.  In Jesus’ name, Amen!

Greater Is Coming (Pt.70) The Importance of Attitude