Progress on Purpose: Make Yourself Worthy of the Investment 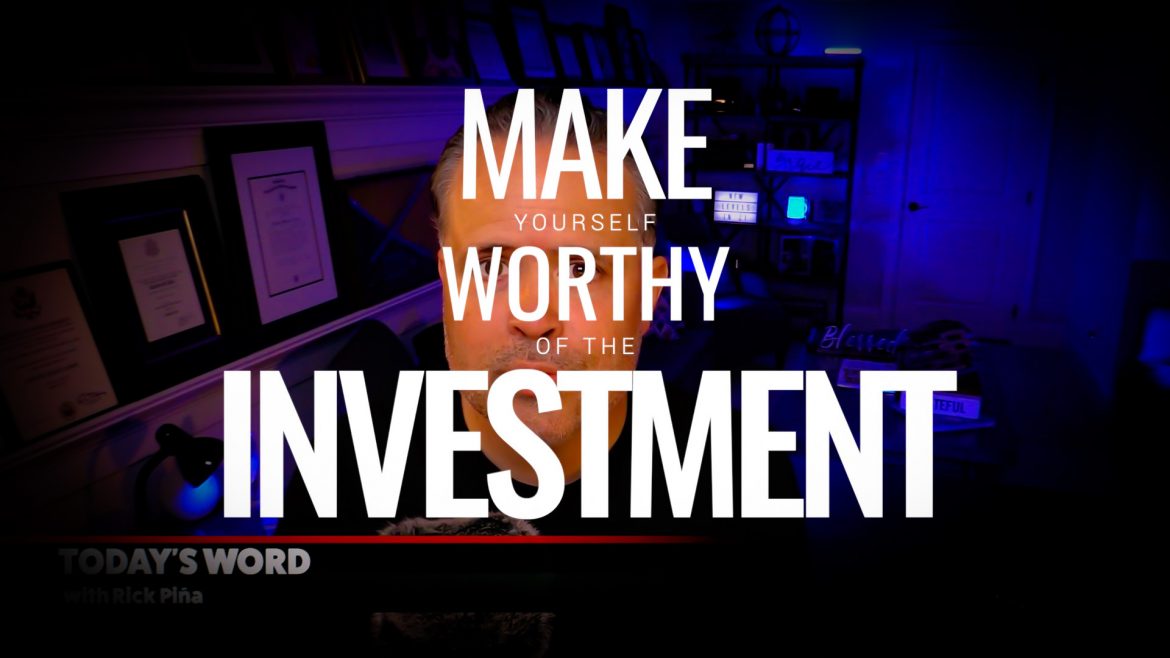 Yesterday I laid the foundation for the roles that can, and should, be filled in your life.  Today I will speak to some of the things you can do to make sure yourself worthy of the investment others will make in you.  I learned a long time ago that I should be FAT (Faith, Available, and Teachable).  Let’s talk about it.

1.  If you want others to invest in you, prove to them that they are FAITHFUL.

Most men will proclaim every one his own goodness: but a faithful man who can find?

People like to hear about God’s faithfulness towards us, and we love it when God sends others who seem tirelessly committed to our advancement.  However, we must return the favor.  Solomon was the richest man on the planet during his day.  He had access to just about anything he wanted.  But what he considered to be hard to find was faithfulness (see Prov 20:6).  It‘s hard to find people who are truly loyal and consistent.

Towards the end of his time on the earth, the Lord instructed Elijah to prepare Elisha to be his successor.  This meant that Elijah had to take the things that God poured into him over the years, and pour those things into Elisha.  Elisha would be Elijah’s legacy.  But before he did so, he tested his young mentee/spiritual son.

If you read 2 Kings 2, you will see how Elijah attempted to discourage and even break away from Elisha.  But Elisha would have nothing of it.  Several times, Elijah said, “You stay here.  I am going over there.”  To which Elisha responded, “I promise, as the Lord lives and as you live, I will not leave you!”

Elisha was faithful to the end until God took Elijah up to heaven.  As a result, Elisha received a DOUBLE PORTION of the anointing that was on Elijah.

Here are some things we can glean from this:

a)  If you want someone to invest in you, you must be willing to be tested.  The person needs to know that you are worthy of the investment.

b)  No one is going to invest in you if you are not loyal, faithful, and dedicated.

c)  You are not entitled to anything.  God told Elijah to invest in Elisha, but Elijah still tested him.  Don’t ever feel entitled.  Even if someone recommends you and tells someone else to help you, don’t feel like the recommendation is a license for laziness.  If anything, it should make you work harder, because someone vouched for you!  Entitlement is a major problem with young people today.  No one wants to invest in someone who does not seem to appreciate the investment.

2.  If you want others to invest in you, make yourself AVAILABLE.

Although Elijah tried to get rid of Elisha several times, the student would not leave the master.  He was there to learn.  He made himself available on Elijah’s timeline.  Elijah spent the last years of his life on this planet with Elisha.  Elisha was with him day and night.  In the end, Elisha received a double-portion of the anointing that was on Elijah.  Elisha started where Elijah ended.  Elijah’s ceiling was Elisha’s floor.  This is how it should be in a relationship between a spiritual parent and a spiritual child.  But this only happened because Elisha made himself available to Elijah.

This reminds me of the countless times when I have made myself available to my mentors and spiritual parents.  When I was stationed in Killeen, Texas, our church had three services on Sundays (8am, 11am, and 7pm).  I was a young preacher.  I wanted to learn as much as I could.  So I spent as much time as I could with my Pastor.  On Sunday mornings, I arrived at church at 7am (or so), to pray.  I would then be there for the 8am and 11am services.  I would then return for 7pm service.  And then, after basically being in church all day, my Pastor would take the time to go to Applebees with me.  I never said NO.  I made myself available to him on his schedule.  As a result, I gleaned what I needed to glean from his life at the time.

God has given me many great mentors.  Many of them are very senior leaders.  These are people with crazy schedules.  I can think of many times when I had to wait for hours to just get 5 minutes with one of them.  To me, it was worth it.  Why, because I was the one who was looking to learn and receive.  Since I am the one who is in receive mode, I need to make myself available to them, not the other way around.

If Elisha did not make himself available to Elijah, he would have missed out.  I would have missed out too.  I am convinced that many people today do not honor or value the grace that is on the people they “claim” they want to glean from.  If they honor them enough to make themselves available, rearranging their schedules if need be, they will be there when the opportunity presents itself for them to receive.

If Elisha was not there at the end, when Elijah went up to be with the Lord, he would have missed out on years of investment.  But he was there and he received.  Why?  Because he made himself available.  Please learn this lesson!

3.  If you want others to invest in you, humble yourself and make sure you are TEACHABLE.

In Exodus 18, Moses was the leader of Israel.  He was the one God chose to lead His people out of Egypt.  His leadership had been tested, but he endured the tests and he was in charge.  However, Moses had not learned how to delegate yet.  As a result, he was running the risk of burning himself out.  God used Moses’ father-in-law to correct him.  Guess what?  Although Moses was the leader, he was humble enough to embrace the correction.

Here are some quick nuggets on this:

a)  Don’t confuse your position with being right.  You can be in charge and still be in need of correction.  Never allow the fact that you have a title or a position to cause you to miss out on the correction God sends your way.

c)  Don’t get offended.  Many people today get offended when they get corrected.  I remember years ago when my Spiritual Father corrected me.  I accepted it.  He said, “Son, thank you for allowing me to correct you.  Some people don’t know how to receive correction.  I have corrected some who have gotten offended and they left the church.  You have an assignment here.  But if you would have left, God would have sent someone else to replace you.”  I will never forget that conversation.  I refuse to give up my destiny because of pride.  No matter how far I go, I pray I never get to the point where I cannot be corrected.

d)  Be open to correction and instruction.  Be teachable.  You don’t know it all.  If every time someone tries to teach you something, you act like you already know it, they are going to walk away from you and you will miss out on their investment.  Remain humble.  Remain “little in your own eyes.”  Be open to correction and teaching.  This way, others will WANT to invest in you.

Father, I remain faithful, available, and teachable.  I am faithful to You and to the people You have assigned to invest in my life.  I will never violate their trust and I will remain loyal to the relationship.  I honor the anointing on their lives, I make myself available on their schedule, and I remain humble enough to receive both instruction and correction.  Living this way, I will LEVEL UP my life in 2021 and beyond!  GREATER IS COMING FOR ME!  I declare this by faith, in Jesus’s name.  Amen!

Progress on Purpose: The People You Need in Your Life

We Can Withstand and Overcome Anything (Part 16)...

We Can Withstand and Overcome Anything (Part 8)...

We Can Withstand and Overcome Anything (Part 4)...

The Grace and Faith to Keep Going

What is the Condition of Your Heart?