Progress on Purpose: Friends Who Support You 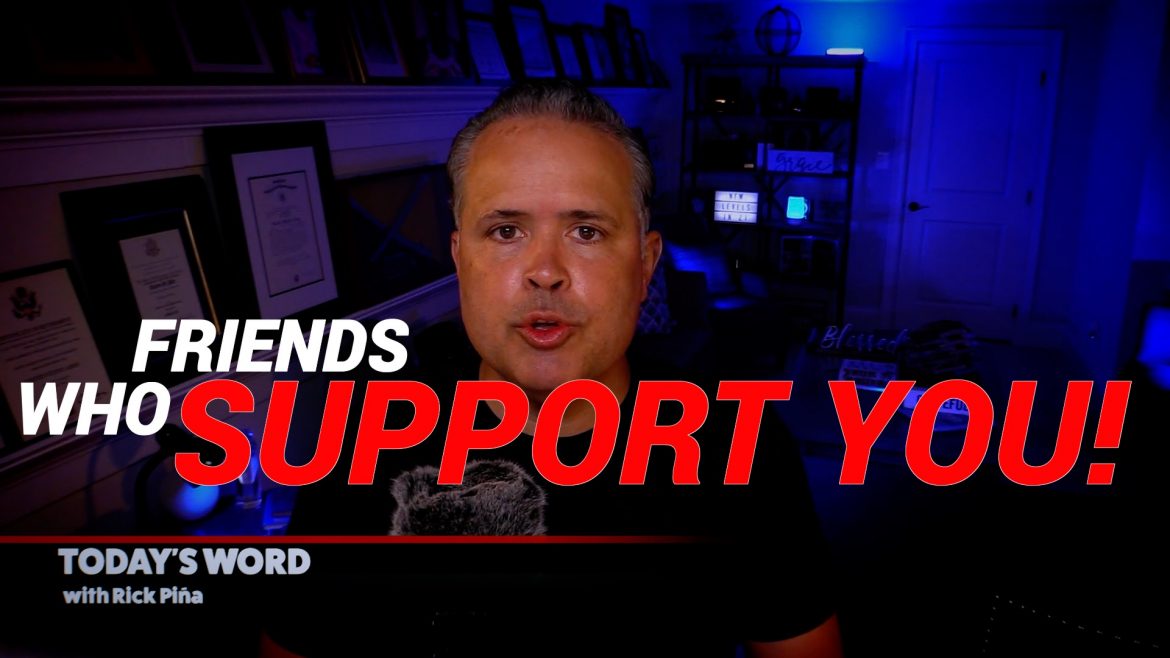 Note:  I had a great break.  I trust you had a great Resurrection weekend.  As good as the rest was, I am excited to share God’s Word with you today.  Let’s get into it!

— This is someone you consider to be at a position in life that you aspire to attain.

— You evaluate this person to be worthy of emulation.

— You have a direct relationship with them, and they are willing to invest in you.

— If you are the mentee and have a mentor (you can have them in many areas of your life), please value the investment.  Make yourself someone worthy of the investment your mentor is making in your life.

— This person is taking their time, talent and experience, and investing it into your success.  Don’t make them regret it.

— Barnabas started off as a mentor to Paul.

— A sponsor opens doors for you that you cannot open for yourself.

— A sponsor can do something for you with one phone call that you could not make happen with 10 years of hard work.

— God will lead people of influence to move on your behalf.  They wind up using their power, influence or money, to help you in ways you cannot help yourself.

— Favor can do more in a minute than labor can do in a lifetime.

— When someone puts their reputation on the line for you, please do not make them regret their decision.

— When Paul attempted to start his ministry, Barnabas was the only person who spoke up for him.  Barnabas was a sponsor for Paul.

1.  You need people in your life who are going to look out for you.

In Acts 9, the Apostle Paul was converted to Christianity.  In one moment, he was terrorizing Christians.  In the next, God knocked him off his high horse (literally), and he accepted Jesus as Lord.  Paul was Born-Again.  God immediately revealed to Paul that he was supposed to preach the Gospel.  So he tried to preach right away.  But no one would listen to him.  It was the right thing at the wrong time.  He was basically a known terrorist against the cause of Christ.  So when he started preaching, instead of listening to him, people tried to kill him.

Paul escaped an attempt on his life, and he headed to Jerusalem because he heard that the men who had been with Jesus (the disciples) were there.  Once again, Paul started preaching.  He preached that Jesus is the Son of God.  Before long, the Jews there wanted to kill him as well.  The only person who showed Paul kindness was a man named Barnabas.  Barnabas lobbied for Paul with the disciples.  Barnabas was Paul’s only advocate.  But things go so bad for Paul that people in Jerusalem wanted to kill him too.  So Barnabas and the disciples helped Paul escape Jerusalem by lowering him down the city’s wall in a basket.

— When no one would give Paul the time of day, God used Barnabas to be Paul’s advocate.

— God will assign people to you, to help you, when it seems like no one else is willing to.

2.  You need people in your life who are willing to sacrifice for you.

When the Apostle Paul was converted to Christ, he knew he was a new man who was called to preach, but it was obvious that the people were not ready to listen to him.  The truth is that he had not truly spent any time with God yet.  Knowing you are called and actually be reading to walk in your calling are NOT the same thing!  So Paul went home to Tarsus.  The Bible says that everyone else had peace because of it.

Paul spent three years at home, getting to know God through the Holy Spirit.  During this time, the Gospel made to Antioch in Syria.  Believers were coming to Christ in Antioch at a rapid pace.  This caused the leaders of the church to send a leader there.  They prayed about it.  They were led by God to send Barnabas.

Barnabas led the people as he was being led of the Holy Spirit, and the congregation grew.  After a couple of years, Barnabas knew he needed help.  This is when he was led by the Holy Spirit to do something radical.  He traveled over 80 miles, with no modern transportation, from Syria to Turkey, from Antioch to Tarsus.  He went all that way to find Paul.  By this time, Paul was ready for ministry.  Barnabas invited Paul to join him in ministry in Antioch.  Paul accepted.  The duo was so effective that believers were called “Christians” (or like Christ) first in Antioch.

I want you to think about what I just shared.  Paul was a terrorist against the church.  God then revealed Himself to Paul.  Paul accepted Jesus as Lord.  Paul also received a call to preach the gospel.  Paul tried to preach.  No one accepted him.  The only person who believed in Paul was Barnabas.  After the two parted ways, Paul was in isolation, alone with God.  Barnabas had a thriving ministry in Antioch.  For Barnabas to travel 80 miles, on boats and over land, to find Paul in his home town and to invite him into ministry is nothing less than the favor of God.  This is also a great example of what we need in true friends.  We need friends who believe in us, who support us, and who are willing to sacrifice for us.

— True friendship has to extend beyond lip service.

— If you are always sacrificing for your friend, but they are not willing to sacrifice for you, that is not a friendship.  Barnabas was willing to travel 80 miles to find Paul.  Paul was willing to leave everything he knew to join Barnabas.  That’s a friendship, and it is an example of the types of friendships God can bless us with.

3.  You need God-given friends who are called by God to ‘do life’ with you.

By this point in the story of Barnabas and Paul, we are in Acts 13.  The church in Antioch was so successful that church leadership came to have a meeting.  In the meeting, they prayed about whom they should send out on a missionary journey.

In the church at Antioch there were some prophets and teachers. They were Barnabas, Simeon (also called Niger), Lucius (from the city of Cyrene), Manaen (who had grown up with King Herod), and Saul.  These men were all serving the Lord and fasting when the Holy Spirit said to them, “Appoint Barnabas and Saul to do a special work for me. They are the ones I have chosen to do it.”  So the church fasted and prayed.  They laid their hands on Barnabas and Saul and sent them out.  Barnabas and Saul were sent out by the Holy Spirit.

I also want to point out that the Holy Spirit said, “Appoint Barnabas and Saul to do a special work for me. They are the ones I have chosen to do it.”  There was an assignment, and God selected TWO MEN to do it.  Paul and Barnabas were called together in ministry by God Himself.  There were ordained to be together on an assignment from God.  But this all happened because Barnabas believed in Paul, he looked out for him in Jerusalem, he went out of his way to travel to Tarsus to find him, and he then allowed Paul to join him in ministry in Antioch.  The two men formed a bond.  They had a great relationship and they did ministry together.

— God will use your friends to help prepare you for your life’s assignment.  While the Apostle Paul went on four missionary journeys and he wrote half the New Testament, it is safe to say that there would be no Paul without Barnabas.  God used Barnabas to help Paul when no one once would, and their friendship helped develop Paul into the man he became.

— We all need friends.  We all need people on our level (not above us or under us).  These are people we can talk to, bounce ideas off of, learn from, laugh with, cry with, and do life with.  Tomorrow I will talk about choosing your friends wisely, because good or bad, your friends will rub off on you!

Father, I am not a lone ranger.  I know I need others and others need me.  I thank You for giving me the right friends.  By faith, I declare that I have friends who support me, believe in me, and sacrifice for me.  I do the same for them.  I do life with them, and they do life with me.  Together, we become the men/women we are called to be, and we leave a mark in this world that will not easily be erased!  I LEVEL UP my friendships in 2021!  GREATER IS COMING FOR ME!  I declare this by faith, in Jesus’s name.  Amen!

Progress on Purpose: Godly Friends Help Usher You Into Your Destiny

You Need Help Because It’s A Long Journey

Progress on Purpose: The Support of Friends

Progress on Purpose: Beware of Dream-Killers