What the Resurrection of Jesus Means to YOU (Part 4: Jesus took us From Servants to Sons) 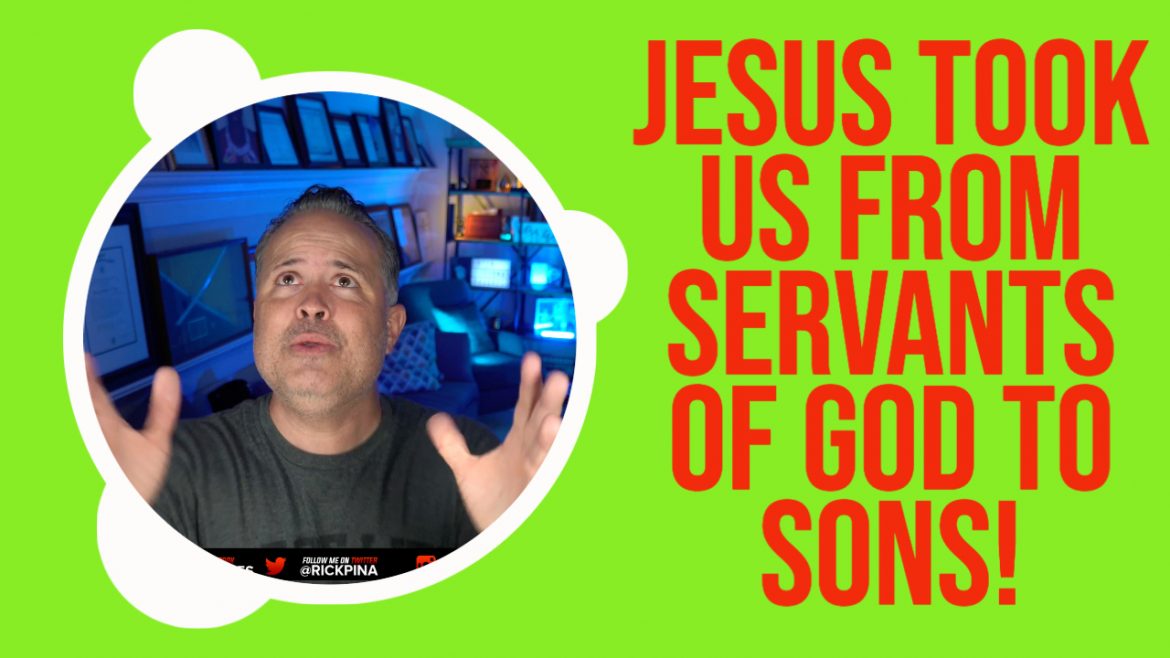 This past Sunday was Easter/Resurrection Sunday.  I have taught you several messages about the importance of the Resurrection already.  Today I will continue to build upon what I have shared thus far.

Here are two scriptures to look at, to set the foundation for today’s message.

Before I went on Spring Break, I shared a message that focused on how Paul called The Law a guardian or a tutor. Paul helped us understand that The Law was given for a certain time, just like a guardian, or a nanny, is given to teach and/or protect a child for a specific amount of time. Paul said this in Galatians 3. Today we will look at chapter 4 because Paul continues his analogy. I think the first seven verses of chapter 4, along with what I already shared with you from John, will help us better understand what Jesus did with His death and resurrection.

Paul says, “Think of it this way. If a father dies and leaves an inheritance for his young children, those children are not much better off than slaves (or servants) until they grow up, even though they actually own everything their father had. They have to obey their guardians until they reach whatever age their father set.” Paul wants us to picture a child born with a rich inheritance. Let’s say they are an heir to a throne. He has a bright future, but while he is a child, he does not truly understand all his father owns, all he is heir to, nor who he truly is. In this way, he is no different from the child of a slave or servant. The two little boys — the baby who is a prince and the one who is the child of a servant — are both clueless about their future. And both simply follow the instructions of their parents or guardians until they grow up and discover who they are.

Paul continues and says, “And that’s the way it was with us before Christ came. We were like children; we were slaves to the basic spiritual principles of this world. But when the right time came, God sent his Son, born of a woman, subject to the law. God sent him to buy freedom for us who were slaves to the law, so that he could adopt us as his very own children. And because we are his children, God has sent the Spirit of his Son into our hearts, prompting us to call out, “Abba, Father.” Now you are no longer a slave or a servant, but God’s own child. And since you are his child, God has made you his heir.”

So what does this mean for you today?  A few things.  This is powerful!

1. The people who followed God under The Law, prior to Jesus, were like children born heirs to a great inheritance. But because they were children, they were clueless about their inheritance. Their ignorance made them no different from the children of slaves or servants, born with no inheritance. Said another way, the person who does not have an inheritance and the person who has one, but does not know about it, basically live the same way. So believers under The Law actually had a great inheritance coming, but they were ignorant of it, so the inheritance did not mean anything to them. They did not see themselves as sons of God. They saw themselves as servants of God and slaves to The Law. A servant has a much different mindset than a son does. Under The Law, God’s followers saw themselves as servants of a distant God, not sons of an intimate Father.

2. Prior to Jesus, God’s people were spiritually no different from non-believers. They did not have the Holy Spirit. Therefore, Paul says they were “slaves to the basic spiritual principles of this world.” They were trying to follow God’s laws with human effort because they did not have the Holy Spirit living inside of them. This made them mere humans, just like everyone else on the planet.

3. In the fullness of time, God sent His own Son (Jesus), born of a woman (to be just like us), subject to The Law (in order to fulfill it). Paul says, “God sent him to buy freedom for us who were slaves to the law, so that he could adopt us as his very own children.” Jesus redeemed us. He “bought” us with His own blood. How that we are redeemed, we are no longer servants or slaves, we are now SONS of the Most-High God! This is a critical revelation. If you don’t understand this, you can be under the New Covenant (sons) but still have the Old Covenant mentality (servants).

4. Under The Law, God’s people were slaves to The Law and mere servants of God. Under Grace, we are now sons. The Bible says, “Now you are no longer a slave but God’s own child.” There is a big difference between a slave or servant and a son.

5. Jesus died to deliver us from being slaves to The Law and general servants of God to make us sons. The Bible says, “And since you are his child, God has made you his heir.” We are now the sons (and I mean male and female) of God, and as sons, we have a great inheritance.

6. In Romans, Paul said, “Now if we are children, then we are heirs — heirs of God and joint-heirs with Christ” (Romans 8:17). We get to receive THE SAME inheritance Jesus received. The Father loves us NO LESS than He loved His own Son Jesus. He loves us with THE SAME love, He filled us with THE SAME Holy Spirit, and He gave us THE SAME faith Jesus had! Wow! You are not a slave. You are not a servant. You are a SON of God! Jesus redeemed you from servant status, and He gave you son status. You brought you up to His level. You are now a joint heir with Him!

7. If you are Born-Again, you are God’s son (male and female). You are an heir of God and actually a joint heir with Christ Jesus Himself. In Jesus, you graduate from being a servant to being a son! Not because you earned it. Not because you deserved it. Actually, not because of anything you did. God did this because He loves you, and He wants to bless you as His child. He did this by His unearned and amazing GRACE! The day you open your heart to this truth will be the day you start walking in the fullness of the life Christ Jesus died to give you!

8. The resurrection of Jesus is so powerful, on so many levels, that I could teach on it for months. For today, I believe the Father wants you to meditate on this truth: you are no longer a slave or s servant; you are a son of the Most-High God. A servant is not an “owner” in the family home. They are there to serve something they don’t own. They are there to support the vision of someone else. However, a son walks around the home like they own it becuase they do. They are part of the family. They have an inheritance. They are in a blood relationship. When the parents get a new vehicle, they say, “We got a new car.” When the parents move to a new home, they say, “We got a new house.” If the parents have a business and they expand it, the children say, “Our family business is growing.” Why? Because they are connected by BLOOD. They are in covenant. They are owners in the relationship. They don’t have to ask permission to open the fridge. They don’t have to ask permission to eat something from the pantry. Everything in the home is theirs because they are sons and heirs to all their parents have worked hard for.

When you look at it from that perspective, I want you to know that you are an heir of God. You are His son (male and female). You are not a servant. You can walk around this planet like you own it becuase Your Daddy does. You are connected to Him by blood — the blood of Jesus! So please don’t pray like you are a servant, praying to some distant or despondent God. Pray like you are in a relationship with Your Daddy and know that He wants to bless you because He wants to bless you! He wants to see you do well becuase you are His child, you are called by His name, you are covered with His blood, you are filled with His Spirit, and you are assigned to His purpose, on this planet, until you die! If you believe that, your life will never be the same!

Father, there was a time when Your followers were mere servants.  They followed You by focusing on a set of rules and laws, and they did not have an intimate relationship with You.  Jesus died to deliver us from that situation.  Because of Jesus, I am not a slave or a servant.  I am a SON!  I have all the rights and privileges of a son.  I get to talk to my Daddy whenever I want, and You are always there to talk to me!  You have given me the authority to use Your name.  Therefore, I am not afraid of satan or any demonic force.  You have given me Your Holy Spirit so that I can operate in the supernatural daily.  I don’t enter each day with my head down like a servant.  I enter each day with my head held high, knowing I am a child of the Most-High God!  I have the confidence of knowing that You are ON me, IN me, WITH me, and FOR me.  I am not afraid of any man, nor any force.  I am a son of God, an heir of Your goodness, and a Joint-heir with Jesus Himself.  I am a world-changer and atmosphere-setter!  You use me to leave an indelible mark everywhere I go because I’m Your SON!  Living this way, I know GREATER IS COMING FOR ME!  I declare this by faith.  In Jesus’ name.  Amen.

What the Resurrection of Jesus Means to YOU (Part 3: The Bible and The Holy Spirit)

What the Resurrection of Jesus Means to YOU (Part 5: We are all ONE in Christ!)