Greater Is Coming (Pt.53) The Danger of Being Out Of Position 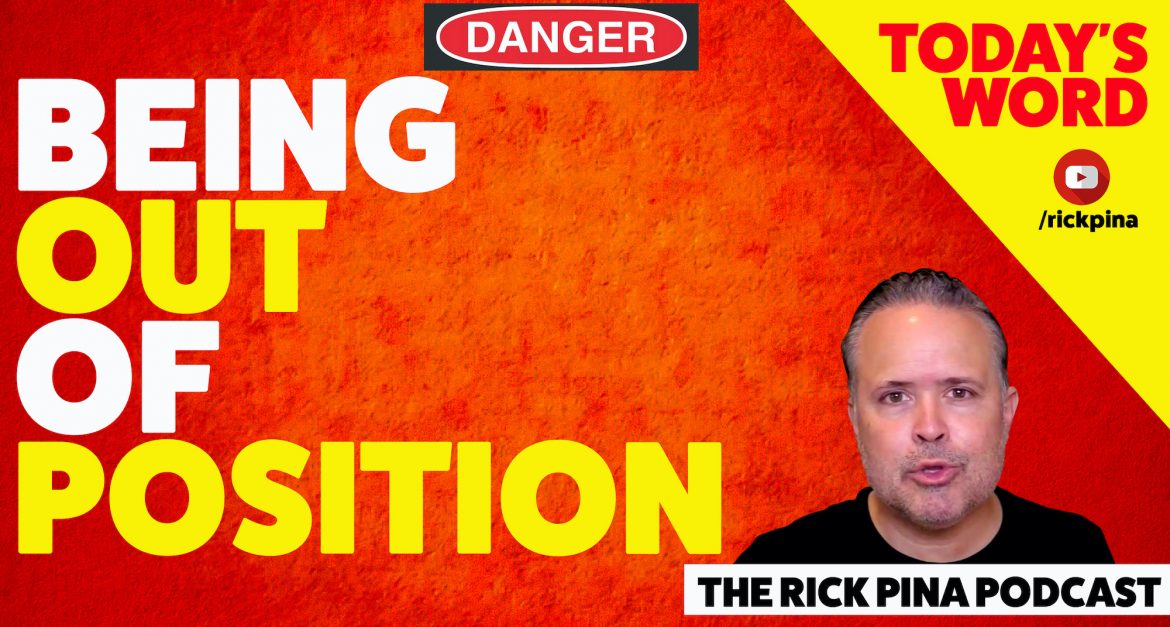 Today I will continue with “Faith and Patience Volume 5 – Greater is Coming!”  Yesterday I told you that David got tired of life on the run.  So he made the decision to move into the land of his enemies, the Philistines.  David befriended Achish, the king of Gath.  The king allowed David, his family, and his 600 men, to move into the royal city.  It did not take long before David was uncomfortable with the arrangement.  So one day, he said to king Achish, “If it is alright with you, we would rather live in one of the country towns instead of here in the royal city.”  Achish did not know David’s reason for asking, but he obliged David and authorized a move to the town of Ziklag.

David and his men lived in Ziklag, among the Philistines, for about 16 months.  They spent their time raiding the Geshurites, the Girzites, and the Amalekites.  These were people who lived near Shur, toward the land of Egypt.  These were also all hard-core enemies of Israel, so David had no problem fighting them.  They were his sworn enemies.  The Bible says that David and his men did not leave one person alive in the villages they attacked.  David also instructed his men to take the sheep, goats, cattle, donkeys, camels, and clothing before returning home to see king Achish.

The king would ask, “Where did you make your raid today?”  David — knowing the Philistines were friends of the Geshurites, Girzites, and Amalekites, but enemies of Israel — would reply, “Against the south of Judah, the Jerahmeelites, and the Kenites.”  David was lying to the king.  David, who used to be a man of integrity, was now acting shady.  He had become no better than a common liar.  But since no one was left alive to come to king Gath and tell him where he really had been, David’s lies went going unchallenged.

David continued living a lie the entire time he was living amongst the Philistines.  King Achish believed everything David was saying.  So he thought to himself, “By now, the people of Israel must hate David bitterly.  Now he will have to stay here and serve me forever!”  So, on the one hand, you have David, who was living a lie before Achish, and on the other hand, you have Achish, who was helping David but only because of his ulterior motives.  This is clearly not a picture of God’s best, but it is the mess David got himself into by making a decision out of frustration.  We will stop here for today.

— Prior to moving to Gath, David was walking with God and seeking to do the Lord’s bidding.  David was not perfect or flawless, but he was at least attempting to do what was right in God’s sight.

— Once David allowed the frustration of being on the run to get to him, he made a critical mistake in deciding to move to Philistine.  And to make a bad situation worse, instead of admitting the mistake and moving back, he started to live a lie.

— Your life is a grand-sum-total of your decisions.  You are where you are today because of the decisions you made yesterday.  You will be where you will be tomorrow because of the decisions you make today.  Being led of God and making decisions that align with His purpose are critical to you becoming the man/woman you are called to be.  The point here is that you are not perfect.  You will make mistakes.  But the sooner you admit those mistakes and you repent before God, the lesser the impact those mistakes will have on your life.  David knew he was wrong, but he remained in his error for 16 months.  Don’t let this be you.  Make sound decisions to avoid negative harvests.  But when you do make a mistake, repent quickly and get back under the protection of God’s will.

2.  When you are out of position, you will feel pressure to be someone you are not.

— When you are in the right place, you wind up surrounded by the right people, you hear the right things, and you are pushed in the right direction.  However, when you are out of position like David was, you will feel all sorts of pressure to do things outside of your character.

— Far too many believers set themselves up for failure by willfully placing themselves in an environment that is not conducive to God’s will.  You can’t be around the wrong people and think you are going to do the right things.  This is why the Bible calls us to holiness.  We are supposed to be separate and different from the world.

— If you tell me that you moved, but I keep finding you at your old address, it is because you have not truly moved IN YOUR HEART.

— If you know you are out of place this morning, and the pressure is on you to be someone you know God did not call you to be, then simply repent and move back in alignment with God’s will.  Don’t stay in the wrong place, when you know it’s the wrong place, because nothing good will come out of it.

— David stayed in the wrong place, and he wound up doing the wrong things.  Learn from David.  Don’t make this mistake.  Come back to God, embrace the grace to be holy (separate), and reject any pressure to be someone you are not!

3.  Bad things happen when you are not true to yourself – who God made you to be.

— In a couple of chapters, we will see David experience the worst tragedy of his life.  This tragedy could have been avoided had David been true to himself.

— David knew he was wrong when had to lie to king Achish every time he went out and came back.  He was living a lie, and he did so for over a year.  Don’t let this be you.  Be true to yourself and to God.

— The devil is a liar.  He is the father of lies (John 8:44).  If you believe a lie, you empower the liar (satan), and you put yourself in a position to live a lie.  This is what David did, and it almost ruined his life.

— Life is much easier when you know who you are, and you live your life in accordance with your God-given identity.  If you do this, you will experience God’s best because your decisions will align with God’s purpose.  This seems like common sense, but I have learned that common sense is not that common.

4.  When you are out of position, you are left to try to make things happen without God.

— You were not designed to live your life without God.  Having to MAKE things happen on your own and EARNING everything by the sweat of your brow is part of the curse God pronounced over Adam and his descendants.  Jesus came to deliver us from that curse.  While David was living in Philistine, he felt the full weight of the curse.  Before this season of his life, he was experiencing The Blessing.  God protected him from Saul and blessed the work of his hands.  However, once David made a poor decision and moved outside of God’s will, he was living in sin, lying his way through life, trying to make himself successful without God.  This is certainly NOT a picture of God’s best.

— When you are in God’s will, being led by God’s Spirit, and making decisions that are aligned with your purpose, you will experience supernatural success.  Things will happen for you that will clearly be beyond the limits of your humanity.  People will notice God’s blessing on your life.  This is how David was living BEFORE he CHOSE to position Himself outside of God’s will.  Once he did, he was no longer under The Blessing, and his life became hard.  Let this be a lesson to us all.  Life is much better when you live in the will of God!

*** Say this, “Today I will repent of all sin and align myself with God’s purpose!”

Father, I know that decisions made in haste or those birthed out of frustration produce undesired outcomes.  So I declare, by faith, that I give my decisions the thoughtfulness and prayerfulness they deserve.  You lead me in all things, and I make sound decisions.  To do so, I renew my mind with Your Word.  Your Word gets down in my heart, and it frames my thinking.  I see myself the way You see me.  I establish my identity in You.  When I discovered Jesus, I also discovered my true self.  When I look in the mirror, I see what You see.  I believe what You believe about me.  I am who You say I am.  Therefore, my life reflects that reality.  I don’t put myself in positions where I am going to feel pressure to be someone I am not.  I don’t even open those doors.  I keep myself in a position where I am free to be me — the ME You called me to be — and I don’t accept any pressure to be someone else. This is why I can boldly declare that GREATER IS COMING FOR ME!  I declare this by faith. In Jesus’ name, Amen!

Greater Is Coming (Pt.54) Never Compromise Who You Are!