Progress on Purpose – Leveling Up Your Finances: #5. The Purpose of Your Prosperity 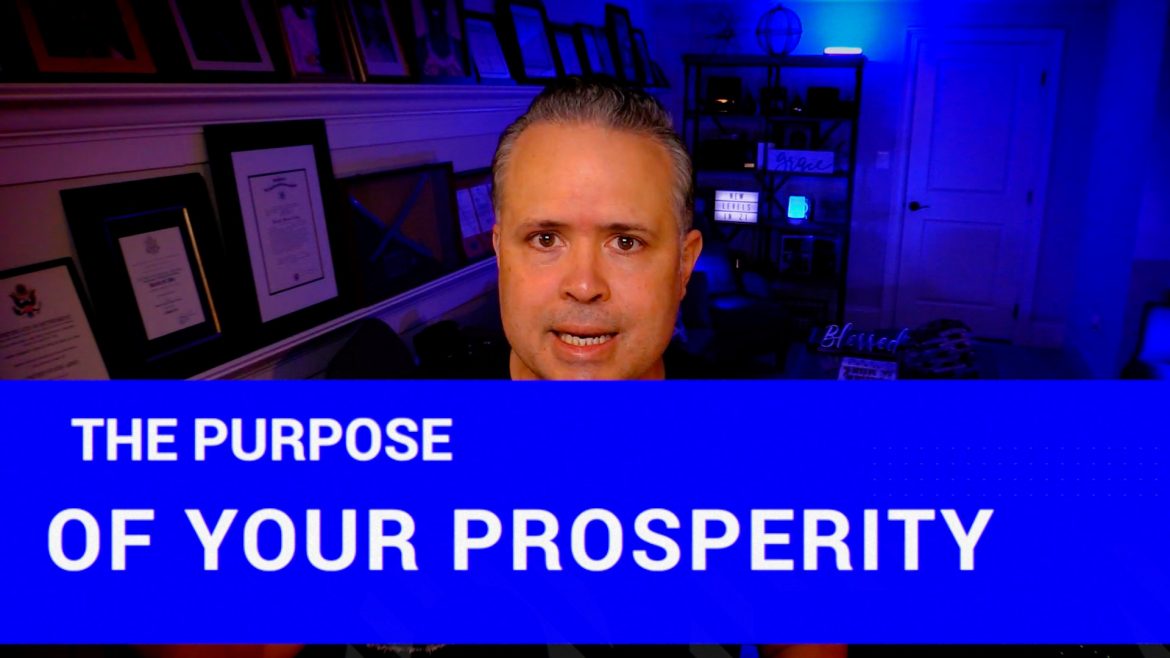 Today we continue our series, “Progress On Purpose.”  I told you that God wants us to walk in “NEW LEVELS IN 2021!”  But if we are going to do so, we must be intentional about our progress.  With that in mind, as we lay the foundation for the year, I told you that I would discuss “Leveling Up” in five areas:

We have covered the first one thus far.  As we study the second (leveling up financially), I am breaking this down into the following five topics:

1.  Soul Prosperity & the Answer to Poverty

5.  The Purpose of Prosperity

We have covered four of these five thus far.  Today I will address the purpose of your prosperity.

So what does this mean for you today?  As we get into it, I am going to take a different approach today.  While we are talking about money, I am going to elevate the perspective a little.  Let’s look at the life of Jesus as our example for how to live.  Once we do, I will connect it to your finances and share a message tomorrow that will further elaborate on the point.

1.  Jesus only said and did what the Father led Him to say and do.

In John 5 Jesus heals an impotent man by the pool of Bethesda who had an infirmity for 38 years.

— He did this as an act of God’s free grace.

— The man did nothing to deserve it and he did not even express faith.

— He did not go to Jesus, Jesus came to Him!

— Jesus also did it because he was led by the Father to do it.

16 Jesus was doing all this on the Sabbath day. So these Jews began trying to make him stop.

17 But he said to them, “My Father never stops working, and so I work too.”

18 This made them even more determined to kill him. They thought it was bad enough that he was breaking the law about the Sabbath day. And now he was saying that God is his Father, making himself equal with God!

19 But Jesus answered, “I assure you that the Son can do nothing alone. He does only what he sees his Father doing. The Son does the same things that the Father does.

20 The Father loves the Son and shows him everything he does. This man was healed. But the Father will show the Son greater things than this to do. Then you will all be amazed.

The religious people of the time were upset, but Jesus was not concerned with their feelings, because He was doing exactly what the Father was leading Him to do, by the Holy Spirit.

Revelation is an authorization for your participation.

Jesus said, “I assure you that the Son can do nothing alone. He does only what he sees his Father doing. The Son does the same things that the Father does.  The Father loves the Son and shows him everything he does.”

— Jesus sought guidance (insight, revelation, and understanding) from the Father, through the Holy Spirit.

— The Father then revealed to Jesus what He wanted to do, for that day, or in that season.  Once Jesus had the revelation (whatever the Father reveals as HIS WILL), He took it as an invitation to participate in what the Father was doing in the earth.

— Jesus’ point was that if the Father reveals something to you that He is doing on this planet, He is giving you the revelation because He wants your participation.

*** Once God reveals to you what He is up to within your sphere of influence, you are then authorized to be part of it.

In his closing statement to the religious leaders who were opposing Him, Jesus said, “This man was healed. But the Father will show the Son greater things than this to do. Then you will all be amazed.”

Later on in this passage, in verse 30, Jesus said the following.

30 “I can do nothing alone. I judge only the way I am told. And my judgment is right, because I am not trying to please myself. I want only to please the one who sent me.

— We were not designed to do ANYTHING on our own.

— We were designed to be led of God’s Spirit in ALL THINGS!

— Jesus always said the right things and performed the right actions, because He was led of the Holy Spirit in everything He did.

You may be thinking, “Okay Rick, but what does this have to do with finances.”  I am going to get there.  But I will give you a hint in the latter portion of verse 30.  Jesus said, “I am not trying to please myself. I want only to please the one who sent me.”  If you really want to experience overflow in EVERY area of your life, you have to get to the point where your life is NOT about you and your selfish desires!

This leads me to John 6 and my second point.

2.  Jesus was not on this planet to do whatever HE wanted!

38 I came down from heaven to do what God wants, not what I want.

— Jesus constantly reminded Himself and His followers that He was not on the earth on a self-seeking mission, but rather on a divine assignment from the Father.

— Likewise, you and I are not here, on the earth, to perform our own will.  We are here to fulfill the will of the Father who sent us.

— If you understand this, then you will NOT just be focused on you and your family when it comes to your finances.  You will be open to whatever God wants to do, however, He wants to do it, THROUGH YOU!

3.  You are living in two realms at the same time!

Jesus answered, “I am what I have told you from the beginning.

26 I have much more I could say to judge you. But I tell people only what I have heard from the one who sent me, and he speaks the truth.”

27 They did not understand who he was talking about. He was telling them about the Father.

29 The one who sent me is with me. I always do what pleases him. So he has not left me alone.”

30 While he was saying these things, many people believed in him.

— Right now you may be seated in front of your computer, but you are also (at the same time) seated in heavenly places (Ephesians 2:6).

For our conversation is in heaven; from whence also we look for the Saviour, the Lord Jesus Christ:

— You are human, but the divine lives in you!

— Jesus’ success in this world came from His ability to remain focused on and to receive His marching orders from heaven.

— You and I are supposed to live the same way.

— If you get up every morning and get your orders from headquarters, money won’t be an issue, because wherever God leads, He feeds; wherever He guides, He provides!

4.  God will give you the words, and perform the work!

Don’t you believe that I am in the Father, and that the Father is in me? The words I say to you I do not speak on my own authority. Rather, it is the Father, living in me, who is doing his work.

* The goal is to be ONE with the Father.

— Jesus told His followers that by seeing Him, they had seen the Father.

— Jesus established His identity in His relationship with the Father.

— Jesus is our example.  He modeled how we are supposed to live.

As a Born-Again believer God wants you to:

a)  Establish your identity in Him.

b)  Become one with Him, so that He can flow through you and impact the world.

c)  Develop confidence in the fact that He is ON you, IN you, WITH you, and FOR you.

d)  Give up the life you thought you wanted, for the life, He planned for you to have.

e)  Rely on Him to be Your source.

Once you are living the life God called you to live and doing what He is leading you to do, money will not be an issue.  God’s provision is already stored up for HIS VISION!

5.  Pour your life out as an offering!

— While Jesus was in the earth He was the only begotten of the Father.  He was singular and unique.  No one else on earth was like Him.

— When Jesus was in the earth He was the only one of His kind.  But after He died and was sown as a seed, His life produced a great harvest.  We now live today, JUST LIKE JESUS, in this world!  Jesus was the incarnation of God and we are the continuation of His incarnation!

— Jesus made His life all about the Father.  If you live the same way, you will never lack a thing!

Father, I know it is Your desire that I walk in NEW LEVELS in 2021.  You are leading me to LEVEL UP in every area of my life.  I level up financially.  I make my life All About You!  I only say what You lead me to say.  I only do what You lead me to do.  I am led by Your Spirit in all things, at all times.  I am on this planet for Your glory.  My life is not about me or my selfish desires.  I pursue what You destined for me, and as a result, I LACK NOTHING!  Your provision is already stored up for the VISION You established for my life.  I know GREATER IS COMING FOR ME!  I declare this by faith.  In Jesus’ name. Amen.

Progress on Purpose – Leveling Up Your Finances: #4. Giving to the Poor (less fortunate)

Progress on Purpose – Leveling Up Your Finances: #5. The Purpose of Your Prosperity (Part 2)