Intentional Progress in 2022: Life Lessons From Jesus (Part 39) – The Road to the Resurrection (Part 10) 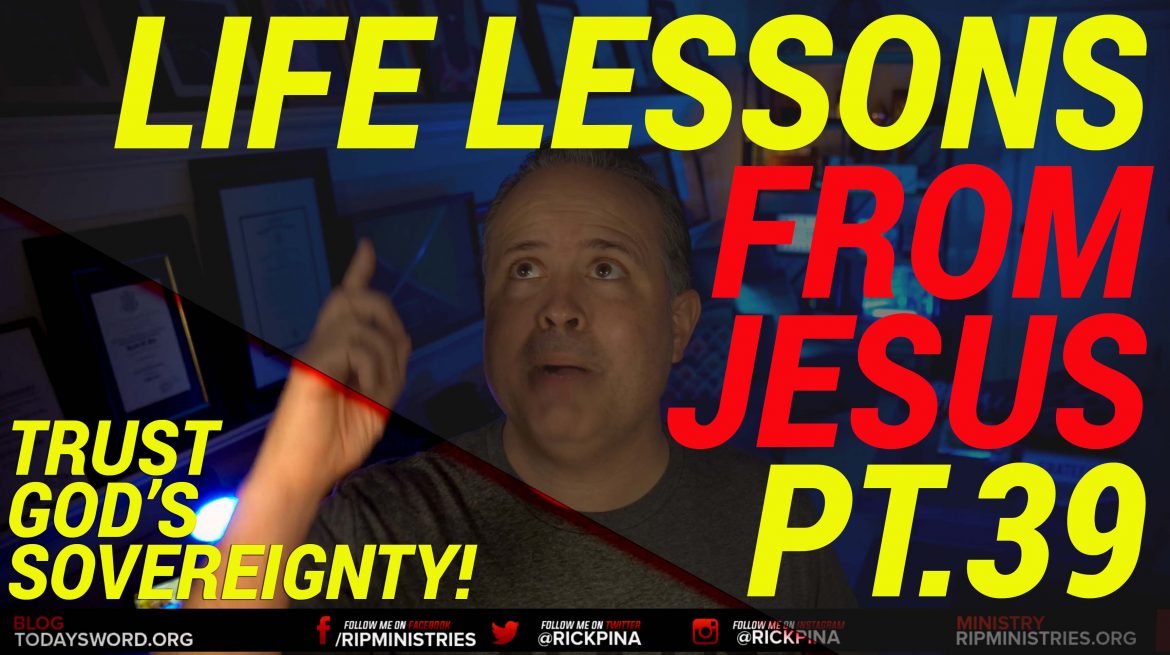 In our last message, we saw how Jesus was tried and convicted for being Himself. All He did was reveal His true identity. Pilate was terrified when he realized Jesus had not done anything wrong. He did not want Jesus to be killed, but he was stuck in a tricky situation.

Pilate went back inside and asked Jesus, “Where are you from?” But once again, Jesus did not answer. Pilate knew he had a bad situation on his hands. An innocent man was standing before him, a blood-thirsty crowd was clamoring just outside his palace, and a storm of thoughts was flooding through his mind.

Pilate could not understand why Jesus was not interested in making a defense. Jesus’ silence frustrated Pilate. In his frustration, the governor asked, “Why won’t you answer my question? Don’t you know that I have the power to let you go free or to nail you to a cross?” Whoa! Pilate crossed the line there. Pilate attempted to explain authority to Supreme Authority. He was giving a class on power to the one with All Power. Any power or authority Pilate had was given to him by God, and Jesus knew it. Jesus replied, “You haven’t a shred of authority over me except what has been given you from heaven.”

God could have killed Pilate in an instant for authorizing the death of Jesus, but He did not because there was purpose behind it.  Jesus could have called down a legion of angels and instantly eliminated the Pharisees and Sanhedrin.  Still, He did not because He understood what was going on beyond the surface.  Pilate boasted that he had the power to let Jesus go free or to nail Him to the cross, but Pilate was just a peon on God’s chessboard.  Pilate, and his authorization of the execution, was just a necessary stop along Jesus’s Road to the Resurrection.

— You must grow to the point where you trust God’s sovereignty.

— Jesus knew what was happening, so He was in faith.  But my point is that whether you know or not, you can still trust God and His sovereignty.  He will see to it that it all works out for your good.

2.  God will sometimes keep you from defending yourself.

Pilate was frustrated by the fact that Jesus refused to defend Himself.  This reminds me of something that happened to someone I know.  The Lord this Pastor to purchase a piece of property for his church.  He Pastors multiple locations, so this was going to be a location for one of the campuses that are part of the ministry he is called to lead.  Seems pretty straightforward.  However, another church formerly owned the property, and the church ran out of funds during the construction phase.  So it was going up for auction.  This adds a twist.

The word on the street was that a major department store was positioned to purchase the property.  The Lord spoke to the Pastor I know to have his church purchase the property becuase it would house “the harvest” he would send from the region the property is located in.  So the church purchased the property.  Immediately, people from the former church accused this Pastor of “stealing” their church.  Emails went out in his location community, accusing him by name, and soon his name was being slandered around the country.

I know this Pastor personally, and I wanted to see how he would handle it.  It was an easy explanation.  He could write an email, record a video, get on social media, etc.  He had several ways to address it to defend his good name.  However, the Lord told him to remain quiet.  The Lord would not allow him to defend himself.  He lost friends over it.  He saw his Pastor-friends talking about him, and through it all, the Lord told him to remain silent.  In the end, the property was purchased, the church building was finished, and his ministry has a thriving campus at that site.

When things like this happen this happen, I question God.  I want to know why He does things the way He does.  Sometimes He gives me an answer.  Many times, in situations like these, the lesson is: there are some things you won’t understand until you get to heaven.  God’s ways are so above our ways that we have to learn to be obedient, even when we don’t understand.

— Pilate could not understand why Jesus refused to defend Himself even though He was clearly in the right.

— Sometimes, God forbids you from defending yourself because He wants to be your defense.  Other times He does so simply because He does not want a defense presented.  What is happening TO you is happening FOR you, so God is happy with letting it happen.  You may not like it.  You may not understand it.  But in order to walk with God, you must get comfortable with a certain level of mystery.

— Another lesson you can learn from this is that adversity often exposes who is truly with you.  The crowd that was signing Jesus’ praises quickly turned on Him as soon as He was accused of his trumped-up charges.  The Pastor in my story lost friends when lies were told about it, but then again, maybe they were not true friends in the first place.  When the pressure is on, you will learn that not everyone with you is FOR you.

— Last lesson from this point: God does not have to explain Himself, but He will reveal Himself.  So just keep believing, God will manifest Himself in your situation in the fulness of time.

3.  God is the source of all power and authority.

Pilate said to Jesus, “Why won’t you answer my question? Don’t you know that I have the power to let you go free or to nail you to a cross?”

Jesus was okay with most of Pilate’s questions. But when Pilate made this statement, it triggered Jesus. Pilate crossed the line. Pilate was trying to give a lesson on authority to Supreme Authority. He was giving a class on power to the one with All Power.

Jesus replied, “You haven’t a shred of authority over me except what has been given you from heaven.”

The Bible says, “Everyone who rules was given the power to rule by God. And all those who rule now were given that power by God.” (Romans 13:1).

— Any power or authority Pilate had was given to him by God, and Jesus knew it.

— People don’t have as much power over you as they may think. Whatever authority they have is an authority that God is okay with. But whenever they cross the line and attempt to usurp the level of authority they are not authorized to walk in or violate one of His children, God is quick to address it. God will either lead you to address it, as He did with Jesus in the text, or He will handle it for you.

— You should never be afraid of people becuase you are walking with God.

— Pilate thought he was exercising authority over Jesus, but he was only doing what God was allowing. What is true with Jesus is true with you.

— God is your shield, and He is your defense. “God is our protection and source of strength. He is our ever-present help in times of trouble” (Psalm 46:1).

— Since God is ON you, IN you, WITH you, and FOR you, you have nothing to fear!

Father, I thank You for teaching me about You from Your Word.  Your Word gives me peace.  You are God alone.  I acknowledge no other deity, I call upon no other name, and I know of no other God.  You alone are worthy.  You alone are the King of kings and the Lord of lords.  You sit on the circle of the earth, and You have all things under Your feet.  You know what You are doing in my life, and Your power gives me peace.  You are the Greatest Power, and I am IN YOU.  Therefore, I shall never be defeated!   You watch over me to keep me safe from secret traps and deadly plans.  I am still here, and it is only by Your grace.  I have made more mistakes than I want to remember.  I have been through more challenges than I want to recount.  But I am still standing, still breathing, still moving, and still pressing because You are not through with me.  You are my God!  My trust and confidence are in You and You alone!  I head into this day knowing that You head into it with me!  Therefore, GREATER IS COMING FOR ME!  I declare this by faith.  In Jesus’ name.  Amen.

Intentional Progress in 2022: Life Lessons From Jesus (Part 38) – The Road to the Resurrection (Part 9)

Intentional Progress in 2022: Life Lessons From Jesus (Part 40) – The Road to the Resurrection (Part 11)