Progress on Purpose: Everyone Can’t Go With You 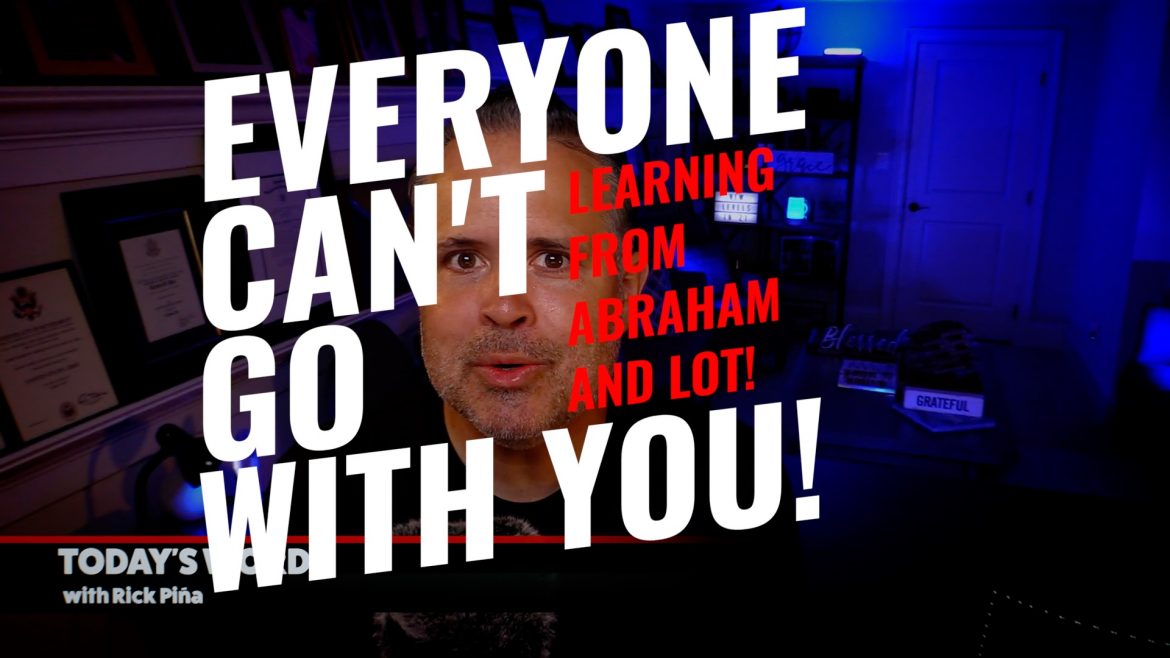 1  The Lord said to Abram, “Leave your country and your people. Leave your father’s family and go to the country that I will show you.

2  I will build a great nation from you.  I will bless you and make your name famous.  People will use your name to bless other people.

3  I will bless those who bless you, and I will curse those who curse you.  I will use you to bless all the people on earth.”

4  So Abram left Haran just like the Lord said, and Lot went with him.  Abram was 75 years old when he left Haran.

5 He took his wife Sarai, his nephew Lot…

For the next few days, I will teach on Abraham and Lot.  The point I will make is about discerning when to let people go.  I will lay the foundation for the discussion today.

1.  While it is natural to want to take people with you, God’s plans for you don’t always include those around you.

We are first introduced to Abraham (known as Abram at the time), with this statement, “Leave your country and your people. Leave your father’s family and go to the country that I will show you.”  As we can see in Genesis 12, when Abraham left Haran, Lot went with him.

The text does not say that Abraham took Lot.  It just says, “So Abram left Haran just like the Lord said, and Lot went with him.  Abram was 75 years old when he left Haran.”  Whether Abraham asked Lot to come or not, the point is that he allowed it, even though God clearly told him to leave his father’s family behind.

God made it clear to Abraham that HE had plans for him.

— God said that He would make of Abraham a great nation.

— God said He was going to bless Abraham and make his name famous.

— God said that Abraham’s name would be so powerful that it would be used to bless others.

— God said He would bless those who blessed Abraham and cursed those who cursed him.

— Finally, God said that all the families of the earth would be blessed through Abraham.

— This was all about the plans God made for Abraham from the foundations of the world.

— And these plans DID NOT include Lot.

a)  As much as we love and appreciate those around us, we must discern the difference between what God is telling us ABOUT US and what has planned for THEM.

b)  Don’t allow your desire to be “nice” to cause you to be disobedient to God.  Do what God said, the way He said to do it!

c)  Leveling up in your relationships does NOT mean you have to make concessions for people who are not supposed to go on the journey with you.

d)  There are some places God will call you to go that the people around you right now are simply not called to go.  If God is taking you into something new, and you try to take people with you are not in harmony with what God is saying and doing, those people will become a problem for you.

e)  You will never maximize where you are going if you are trying to bring along people who are not anointed for the ride.

f)  Appreciate those around you and thank God for every person He has placed in your life.  But just remember that they have their own destiny.  The greatest way to support one another is to honor what God is doing in each other.  You don’t have to be them and they don’t have to be you.  If you can celebrate what God is doing in them and they do the same for you, you can provide mutual support without derailing each other from your destinies.

2.  Everyone can’t handle what God has called you to do.

13 So Abram left Egypt. He traveled through the Negev with his wife and everything he owned. Lot was also with them.

2 At this time Abram was very rich. He had many animals and much silver and gold.

5 During this time Lot was also traveling with Abram. Lot had many animals and tents.

6 Abram and Lot had so many animals that the land could not support both of them together.

7 (The Canaanites and the Perizzites were also living in this land at the same time.) The shepherds of Abram and Lot began to argue.

God called Abraham in Genesis 12.  By the beginning of the next chapter, God had already made Abraham rich cattle, silver, and gold.  Since Lot was traveling with him, he became rich too.  Between the two of them, they had so many animals that they were having a hard time finding land that would support the livestock.  Both men had shepherds who were tending to the livestock, and their shepherds began to argue.

a)  I have already driven home the point that association matters.  You can be guilty by association.  You can also be BLESSED by association.  This is what happened with Lot.  Lot was blessed because The Blessing of the Lord was on Abraham, and he was around Abraham.  This was good for Lot, but it was not good for Abraham because Lot did not have the grace to handle The Blessing.

b)   People may see your blessing and desire it.  But they don’t know what God is doing in your life.  They don’t know what God is working in your heart.  They may not understand the fact that God has GRACED you to handle what He has blessed you with.  If they get what you have, and they don’t have the GRACE for it, then what is a blessing to you will become a burden for them!

c)  You must be processed to the point where you can carry the weight of the anointing associated with your divine assignment.  We don’t know much about Abraham prior to him turning 75, but what I do know is that God was working in his life to get him ready for his divine assignment.  When The Blessing came, he was able to handle it, because he was prepared and graced for it.  But since Lot had not been through the same processing, Lot was not prepared for The Blessing.  When The Blessing came, it was the beginning of the end for Lot.

d)  People see your “glory” by they don’t know your “story.”  They may envy what is “on” you, but if God gave them what He gave you, it might destroy them if they are not prepared for it.

e)  Lot was not humble enough to acknowledge the fact that he was only blessed because of Abraham.  There are some people who you go out of your way for, to bless them and help them, only for them to act like you had nothing to do with their success.  Further, when you part ways, they leave with bitterness and resentment towards you.  This is why you must carefully and prayerfully consider the people you allow close to you.  While you need others to become the man/woman God called you to be, if you connect with the wrong people, they will cause you more problems than good.

f)  Lot was Abraham’s nephew.  He loved his nephew.  He wanted to see his nephew prosper.  That is understandable.  But don’t allow emotions to cause you to disobey God.  Everyone can’t handle what God has called you to do.  If you take the wrong people with you, they will hold you back from the fullness of the assignment God has called you to walk in.

Father, I thank You for revealing to me Your divine plans for my life.  You made plans for me before I was born.  Once I was Born-Again, the Holy Spirit began to reveal TO ME what You prepared FOR ME but was concealed FROM ME.  The more You reveal, the more I walk in my calling and the more impact You make through me, on this planet, for Your glory.  My story includes others.  You have called me to connect with certain people.  But not everyone can go with me.  I have the discipline to only allow those You have called to be in my inner circle to connect with me on that level.  You surround me with people who can handle my anointing and The Blessing You have placed on my life.  I support them, and they support me.  And I refuse to allow my emotions to cause me to bring someone along who is not graced to go on the ride with me.  I LEVEL UP my relationships in 2021.  GREATER IS COMING FOR ME!  I declare this by faith!  In Jesus’ name.  Amen.

Progress on Purpose: God Is With You