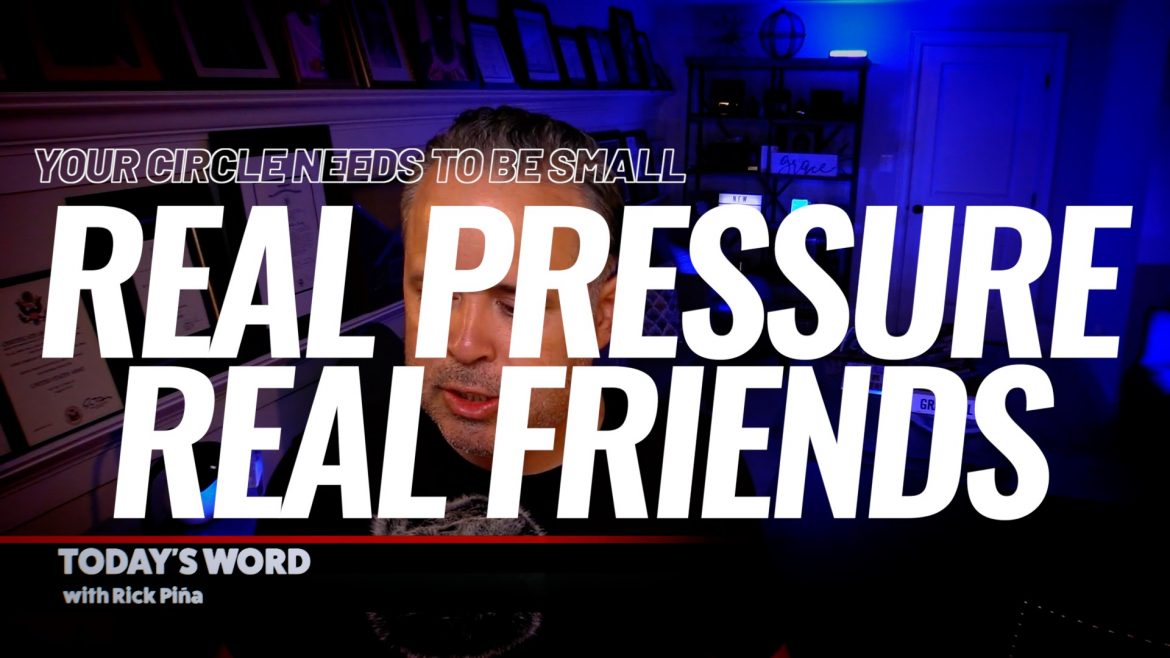 In today’s passage, we will see a situation where a ruler of the synagogue needed help.  He was in a bind.  Let’s see what happened and why surrounding yourself with people of faith is so important.

21 Jesus went back to the other side of the lake in the boat. There, a large crowd of people gathered around him on the shore.

22 A leader of the synagogue came. His name was Jairus. He saw Jesus and bowed down before him.

23 He begged Jesus again and again, saying, “My little daughter is dying. But if you would come and lay your hands on her, she will be healed, and she will live.”

24 So Jesus went with Jairus. Many people followed Jesus. They were pushing very close around him.

35 While Jesus was still there speaking, some men came from the house of Jairus, the synagogue leader. They said, “Your daughter is dead. There is no need to bother the Teacher.”

36 But Jesus did not care what the men said. He said to the synagogue leader, “Don’t be afraid; just believe.”

37 Jesus let only Peter, James, and John the brother of James go with him.

38 They went to the synagogue leader’s house, where Jesus saw many people crying loudly. There was a lot of confusion.

39 He entered the house and said, “Why are you people crying and making so much noise? This child is not dead. She is only sleeping.”

40 But everyone laughed at him.  Jesus told the people to leave the house. Then he went into the room where the child was. He brought the child’s father and mother and his three followers into the room with him.

41 Then Jesus held the girl’s hand and said to her, “Talitha, koum!” (This means “Little girl, I tell you to stand up!”)

42 The girl immediately stood up and began walking. (She was twelve years old.) The father and mother and the followers were amazed.

43 Jesus gave the father and mother very strict orders not to tell people about this. Then he told them to give the girl some food to eat.

1.  You have to know when your friends can’t help you.

Jairus was friends with the Jewish religious elite.  He was a ruler of the synagogue.  He was close with all the religious people.  But when you need a miracle, religion cannot help you.  You must have an intimate relationship with God that rites, rituals, routines, and religion can never provide.  Since his daughter was dying, and he realized he did not have the right friends, he went looking for Jesus.

I need to point out that Jairus’ friends were fighting against Jesus.  So this meant that not only was Jairus not looking for help from his friends, but he was going to the one his friends rejected.  When the pressure is on, and you are in a truly dire situation, you don’t have time to worry about people’s feelings.  You just do what you have to do, especially when it is for your own children.

— Take a moment to take a self-inventory of your friends.  If you really needed a breakthrough, if you needed a prayer to get to heaven, who would you call?  If you can’t find any names in the current list of your friends, you need to find some new friends.

— Jairus was willing to do whatever it took to get a breakthrough for his daughter; even if it meant upsetting his friends.

— When you have friends who are filled with the Holy Spirit and full of God’s Word, you don’t have to look far when you need someone to support your faith.

2.  The language of faith always speaks the desired outcome.

Jairus said, “My little daughter is dying. But if you would come and lay your hands on her, she will be healed, and she will live.”  He did not deny the gravity of the situation.  But he also did not deny the power of God in Jesus.

— From Jesus’ feet, Jairus spoke his desired outcome, in faith.

— Jairus made it clear his little girl was at the point of death.  But he also made it clear that if Jesus would come to his house and lay hands of his daughter, she would recover, and she would LIVE!  This is exactly what happened.

— Jesus could have spoken a word of healing from the seashore, but that is not what Jairus said.  Since Jairus said that Jesus needed to come to his house, and lay hands on his daughter, that is exactly what Jesus did.

— On the way, there was a woman with an issue of blood.  This was SAID, “If I could touch by the hem of His clothes, I shall be made whole!”  This woman touched Jesus and she was healed.  Other people touched Jesus, and nothing happened.  Why?  Because they did not SAY what she SAID!  In the King of God, your words matter!  You will have whatsoever you say!

— On the way, the little girl died.  In that moment, Jairus was filled with fear.  But BEFORE he opened his mouth and spoke words of FEAR, Jesus said, “Don’t be afraid; just believe.”  Basically, Jesus was saying, “Just keep on believing, Brother.  Your words of faith caused me to START walking to your home.  If you speak words of FEAR and tell me to STOP, I will have to STOP, because I honor your will.  Don’t say anything if you can’t speak faith.  Just keep believing, and I will go off of the LAST words you spoke!”

— If you cannot speak the language of faith, just keep your mouth SHUT!  It’s better to be silent than to speak fear, doubt, or unbelief.

— When you make a declaration of faith, openly agreeing with God and His limitless power, you can expect satan and his kingdom to do all he can to get you to change your confession.  The key is to NEVER allow what you see (in this world) to cause you to change what you said (in faith).

3.  Your circle needs to be small when the pressure is on!

Once it was known that Jairus’ daughter was dead, Jesus told the crowd to stop.  They could not go any further with Jairus, because the situation had changed.  The pressure was on.  Jesus needed people of faith around him.  The situation was so bad that Jesus even stopped 9 of the 12 disciples.  Think about that for a minute.  12 men spent 3.5 years with Jesus, and when the pressure was on, Jesus left 75% of them behind.  Furthermore, when Jesus got to the house, the home was filled with friends and family who were mourning.  Do you know what Jesus did?  He kicked them all out!  Learn from this example.  You have to know what to do when the pressure is on!

— It’s never too late for God!  If God is still alive, then your situation still has hope!  But when you need a breakthrough, you can’t have people around you who are speaking against what you are believing God for.

— Fear cancels out faith, and faith cancels out fear.  If you enter a faith fight with the wrong people around you, they could lead you to a faith failure.

— When the pressure is on, you want people around you that are going to believe God with you!

— Be careful not to allow dream-killers into your inner circle.

— Your inner circle needs to be filled with people of like precious faith!

Father, I thank You for teaching me the importance of LEVELING UP on purpose!  You freely offer me everything You planned for me from the foundations of the world.  You do this by Your amazing grace.  My job is to access Your grace with my faith.  I walk and live by faith.  I speak the language of faith, and I surround myself with people of like precious faith.  When the pressure is on, I thank You for giving me a close circle of friends who can believe You WITH ME!  You are not moved when my situation seems dead.  You are only moved by the fact that my faith is still alive!  So, no matter how bad things get, I refuse to throw in the towel, give up, cave in, or quit.  I keep my faith switch in the “ON” position because I am surrounded by friends who keep me going!  I LEVEL UP my relationships in 2021!  GREATER IS COMING FOR ME!  I declare this by faith!  In Jesus’ name.  Amen.

Progress on Purpose: Beware of Dream-Killers