Greater Is Coming (Pt.37) When You Know God Is Up To Something 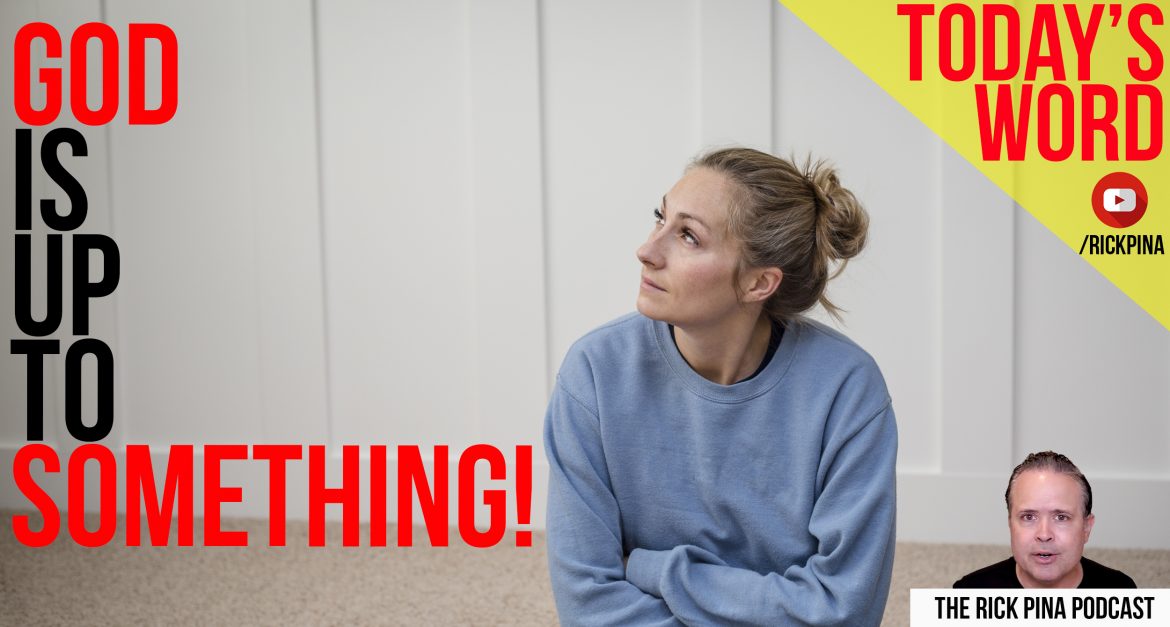 Today I will continue with “Faith and Patience Volume 5 – Greater is Coming!”  We have been studying the life of David.  In this message, I will attempt to recap chapters 19-22.

After being let out of the window by his wife, David fled to Ramah to see the Prophet Samuel.  Saul got word that David was in Ramah.  So he immediately sent his troops on a kill-or-capture mission.  David got wind of it and heard that Jonathan was with the group.  David secretly found a way to see Jonathan, the King’s son.  Jonathan vowed his life to David.  After saying their goodbyes, David took off to the town of Nob.

As soon as he got to Nob, David went to see Ahimelech, the Priest.  David was tired and hungry.  David lied to the Priest and said that he was there on a mission from the King.  He asked for food.  After eating the holy bread, reserved for Priests, David then told Ahimelech that he left in a hurry, so he did not have a sword.  He asked the Priest for one.  The only sword Ahimelech had was the one David used to cut Goliath’s head off.  David grabbed the sword and took off to the land of Gath.

The officers of King Achish of Gath were not happy that David was in town.  They did not take kindly to a foreign leader visiting unannounced.  David heard what the people were saying.  He was terrified of what king Achish might do to him.  David already had problems with the King of Israel, and now he was about to have problems with the King of Gath.  So, as a last-ditch effort to avoid being arrested or killed, David pretended to be insane, scratching on doors and allowing saliva to drool down his beard.  King Achish said to his men, “Must you bring me a madman?  We already have enough of them around here!  Why should I let someone like this be my guest?”  Sure enough, before anyone knew it, David was on the run again.

This time he fled to Adullam, where he found refuge in a cave.  I can imagine David thinking that he had hit rock-bottom.  All of this started when the Prophet appeared at his home unannounced, and God spoke through the man of God.  The Prophet laid hands on David, put some oil on his head, and speak words from heaven, changing David’s life forever.  Prior to that day, David was surrounded by family.  He was living a quiet and humble life.  After that day — since God interrupted his life — David had become a national hero, a member of the royal family, a husband, a military commander, and now Public Enemy #1 in the nation of Israel.  It was in that cave, all by himself, without his family, his wife, or his best friend, that God began David’s turnaround.

Take a moment, please, to imagine David in that cave.  He is all alone.  His life is crazy.  It’s not the life he wanted.  It’s not the life he asked for.  I can imagine him thinking, “What in the world is going on?  God, I never asked for any of this.  I was just fine with the sheep.  I was okay when no one knew my name.  You called me to be King.  Now, look at my life.  I am in a cave.  Help me!”

Seemingly out-of-the-blue, David’s brothers and other relatives arrived at the cave of Adullam.  His brothers, who had once envied what God was doing in his life, were now there to support David.  Then others began coming — men who were in trouble or in debt or who were just discontent with king Saul — until David was the captain of about 400 men.  Just like that, David’s life took a turn for the better.

With his new-found inspiration, David went on a trip to Moab and met with the King.  He said to the King, “Sir, please allow my father and mother to live here with you until I know what God is going to do for me.”  I love that statement.  David was concerned for his parents, not knowing if Saul would go after them, so he enrolled them into his own witness-protection-program, moving them from Bethlehem all the way to the other side of the Salt Sea, to the land of Moab, where no one would be looking for them.  But the key part of the statement for me was when David asked the King to house his parents until he knew what God was going to do for him.  After 400 men arrived in a cave, unannounced, to pledge their allegiance to him, David knew God was up to something; he just didn’t know what it was.

1.  Being destined for greatness does not mean you will not face challenges.  It may mean you face more challenges than you ever thought you could handle.

2.  God knows when you have hit rock-bottom.  God won’t allow you to face more than you can handle.  When you are at your lowest point, when you feel like you have nothing left, you will discover a God who will always MAKE A WAY where there seemed to be NO WAY!

When we get to the point where there is nothing left to try, God is free to do what He planned to do from the beginning of time.

3.  When you have done all you can, and you are spent, then God is free to perform His will in your life.  In the New Testament, God told Paul, “My grace is sufficient for you.  My power is strongest when you are weak.”  Why is that?  It is because when we get tired of doing things our way, we finally give up and allow God to move.  When we get out of the way God is free to manifest His glory.  Once Paul understood this he said, “It’s clear that when I am weak, then I am strong” (see 2 Cor 12:9,10).

When David was at his weakest, all alone, in a cave in Adullam, God stepped in and turned around his entire situation.  God has done this for me many times.  I trust He will do it for you!

4.  God loves you so much that He pursues you.  He will track you down and minister to you, when you need it the most.  When David was in the cave, thinking his life was just about over, God showed up and brought 400 men with Him.  That’s how much God loves you.  The God of the universe takes the time to think about you, and He will actually pursue you until He gets a hold of your heart!

5.  God has a way of turning stumbling blocks into stepping stones.  God did it for Joseph, He did it for David, and He will do it for you.  God has a way of taking what he meant for evil and turning it around for your good.  The 400 men who showed up unannounced in a cave in Adullam became part of David’s story.  They helped David become the David he was destined to be.  And it would not have happened if David was not being pursued by Saul.

7.  There is a level of mystery to walking with God.  David did not know what God was up to.  I love the fact that he asked the King of Moab to protect his parents “until he knew what God was going to do for him.”  David was like, “I don’t know what God is up to.  But I am determined to find out.”  When you know God is up to something in your life, and you don’t really know what it is, it can stir up two things in your heart.  The first is fear.  While fear is NOT okay.  I can understand how scary it is when God is leading you into something that He has not given you all the details on.  But you have to trust Him and trust that He will never hurt you.  He has your best in interests at heart.  Second, it stirs up excitement.  Living by faith is exciting because you never really know what God is going to do or how He is going to do it.  We serve a God who can “blow your mind” at any moment.  Imagine how David felt when he walked out the cave and saw his brothers, his family, and strangers, pleading their lives to him.

God has great plans for you.  Get excited it.  GREATER IS COMING FOR YOU!

Father, I thank You for never leaving me nor forsaking me.  I don’t have to hit rock-bottom before looking to You as my source.  I look to You every day and in every way.  You are my author and finisher, creator and sustainer, beginning and end, all and all.  It is in You that I live and move and have my being.  When I am weak and tired of doing things on my own, it is then that I am made strong and empowered by your Spirit.  Because it is then that I truly yield to You.  Father, You are free to move in my life to bring about Your will.  As You move, You turn every stumbling block into a stepping stone.  You take what the enemy meant for evil, and You turn it around for my good.  You are up to something in my life and I am excited about it.  I enter this day with fearless confidence and great expectations!  GREATER IS COMING FOR ME!  I declare this by faith. In Jesus’ name, Amen!

Greater Is Coming (Pt.38) God Will Locate & Lead You