Greater Is Coming (Pt.44) Be Gracious To Your Enemies 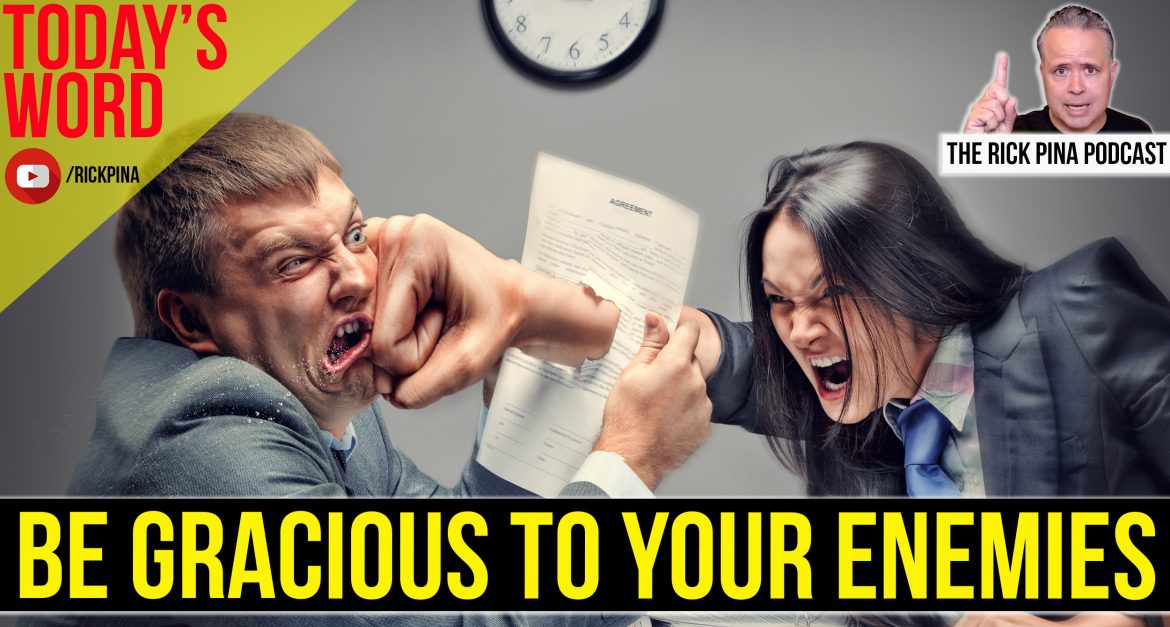 Today I will continue with “Faith and Patience Volume 5 – Greater is Coming!”  As we are studying the life of faith, and our requirement to develop patience/endurance, one of the points I repeat over and over is our continual reliance on God’s grace.  Here are a few principles that you have heard and will continue to hear in my teachings:

— God is better to us than we could ever be to Him.

— God blesses us because He loves us and because He is good, not because we are good.

— As recipients of God’s grace, our heavenly Father expects us also to be extenders of grace.  Said another way, since grace has come TO you, the Father expects you to allow His grace to flow THROUGH you.

— Forgiven people are to forgive people.  The more you realize how much God has forgiven you, the more inclined you should be to forgive others.

— The only way we will ever become the men/women we are called to be is by walking in love, embracing God’s grace, and patiently enduring for the long haul.

Today we cross over into 1 Samuel 24.  In this chapter, David exemplifies many of these points.  David extended grace, mercy, and forgiveness to Saul in a way that could only be attributed to the love of God in his heart.  If he did not have a relationship with God, he would not have been so gracious.  Let me tell you what happened.

After Saul returned from fighting the Philistines, he was told that David had gone into the wilderness of En-Gedi.  So Saul chose 3,000 of his most elite troops and searched for David and his men near an area known as “the rocks of the wild goats.”  When Saul and his forces arrived at the place where the road passes some sheepfolds, Saul went into a cave to use the bathroom.  Hey, he was a king, but he was still human.  He had to do what we all do.  But what happened next was amazing.

Saul just-so-happened to relieve himself in the same cave that David was hiding in.  As Saul was doing ‘his thing,’ all alone, without any guards, David’s men saw him and whispered to him, saying, “Today the LORD is telling you, ‘I will certainly put your enemy into your power, to do with as you wish.’”  This was David’s opportunity.  Saul was in a completely vulnerable position (you know what I mean).  David crept behind Saul, while he was still relieving himself, and cut a piece of the king’s robe off.  As soon as he did, David’s conscience began to bother him because he had come close to killing the King.  David thought, “The LORD knows I shouldn’t have done that to my lord the King.  The LORD forbid that I should do this to my lord the King and attack the LORD’s anointed one, for the LORD himself has chosen him.”  So David restrained his men and did not allow them kill Saul.  I will stop here for today, but what happened next is awesome.  We will deal with it tomorrow.

1.  The fear of the Lord restrains you, even when others are without restraint.

— Although Saul was unrestrained with his fury towards David, David restrained himself against Saul.

— David was laser-focused on becoming the man he was called to be.  His focus on his purpose, and his dedication to God, kept him from killing Saul when he had the chance.

— The vision God has birthed in their hearts restrains them.

— The vision keeps them focused, and they walk in God’s love.  This is how David lived.

— People with NO vision (NO prophetic revelation from God) are people without restraint.  This is how Saul lived.

— When you know who you are (identity), you know what God birthed you to do (purpose), and you know where you are going (vision), it is much easier to emulate God in this world.  David could have killed Saul in that cave, while he was completely vulnerable, but David’s divine identity, purpose, and vision would not allow him to.

— Divine restraint is part of Godly character.  This is something that will be developed in you as you operate in faith and patience.

— While you are waiting on God to do what He promised, one of the most important things you can do is be a man/woman of HONOR.

— While Saul was dishonorable towards David, David was still HONORABLE towards Saul.

— Honor means that you respect the human-in-the-loop, without tripping over or getting caught up in the flaws of their humanity.  This is precisely what David did toward Saul.  David looked past Saul’s faults, flaws, and failures, and he honored him anyway.  This is not an easy thing to do.  But if you can do it, your dedication to Godly honor will make you a candidate for God’s best.

— When you refuse to drop-down to the level of someone who is dishonorable towards you, you are showing God how much you HONOR HIM!

— Although David’s actions did display honor towards the King, David’s reusable to kill Saul when he had a chance to says more about David’s dedication to God than it does his honor for Saul.

— When you love God and truly honor Him in all your ways, you will do honorable things in this world.

— If you can maintain a position and posture of HONOR, it is only a matter of time before you SEE the manifestation of what God SAID!  Because HONOR is the culture that facilitates faith!

— Many things factor into God’s plan for your life.  Several things have to “line up” before God manifests His promise, which is why you must develop divine patience.  The right thing at the wrong time becomes the wrong thing.  The right end pursued by the wrong means will wind up producing the wrong end.

— David could have killed Saul in that cave, but if he did, he would have been pursuing the right thing the wrong way, and he could have derailed himself from his destiny.  Deep down in his heart, Moses knew he was called to deliver the Israelites from the bondage of Egypt.  As a young man living in Pharaoh’s home, he got out ahead of God.  He tried to do it his way, he wound up killing a man, and as a result, he spent 40 years in the wilderness.  If David had killed Saul in that cave, his story might have been very different today.  We don’t know.  But the message here is that if you want to become the person God has destined you to become, you must endure the process.

— God cannot allow you to bypass the process because He reserves prepared blessings for prepared people!

*** I will close with some encouragement.  The same grace you will need when you step into your season of success is on you now, as you wait and develop into the person God needs you to be when the door of opportunity swings wide open.  Be patient; GREATER IS COMING!

Father, You alone are Lord, You alone are God, You alone are my King, and I worship You!  Since You are my Lord, I submit to You and Your Kingdom plans and purposes — not just for me, but also for those You bless me to come in contact with.  This means that I HONOR what You want to do in my life and also in theirs!  Not only will I submit to You for myself, but I refuse to get in the way of what You are doing in/with/through others.  I know You will see to it that we all reap a harvest on every seed sown.  Therefore, I don’t have to seek revenge on anyone.  When people rise up against me, sowing bad seed, I know two things.  First, their attacks will fail, because Your hedge of protection keeps me from all harm.  Second, You will see to it that they reap a bad harvest from their bad seed.  So I don’t have to go after them.  I release them into Your hands!  I wait patiently for doors to open that no man can close and for others to close that no man can open.  As they do, I experience Your best by Your grace.  GREATER IS COMING FOR ME!  I declare this by faith. In Jesus’ name, Amen!