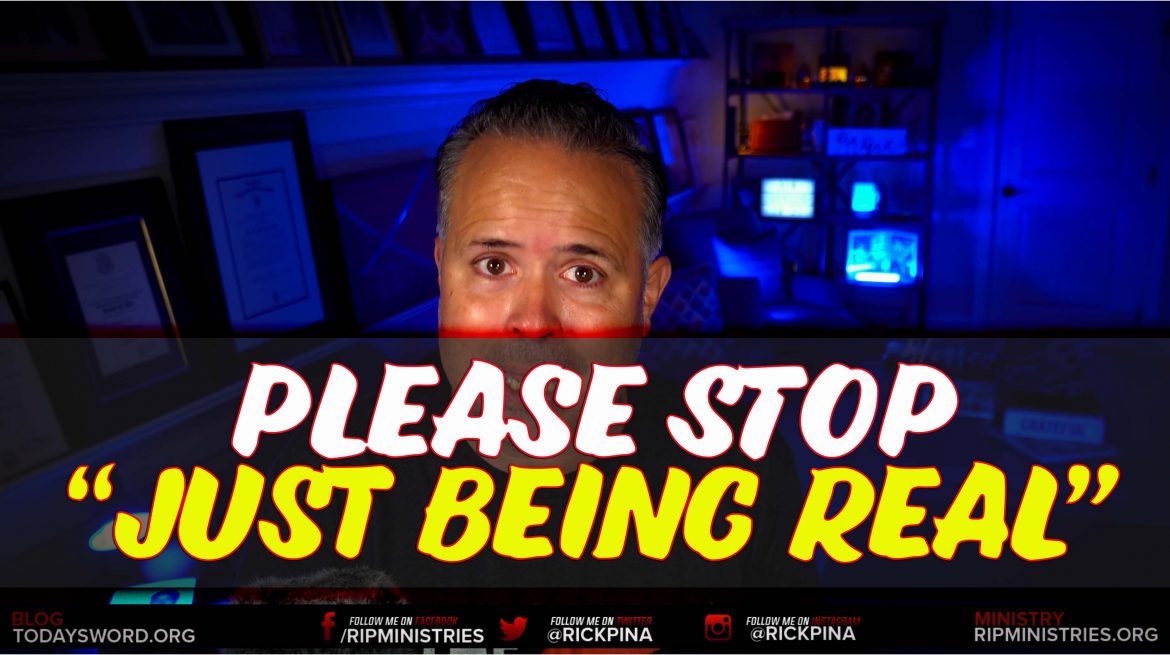 For days we have been looking at verse 13.  We will go back to it again today.

A good tree cannot produce bad fruit, and a bad tree cannot produce good fruit.  You can tell what a tree is like by the fruit it produces.  You cannot pick figs or grapes from thornbushes.  Good people do good things because of the good in their hearts.  Bad people do bad things because of the evil in their hearts.  Your words show what is in your heart.

When I shared Today’s Word from Luke 6 a few days ago, and I taught the point that “you and your words are one,” someone replied and said, “This word is so good… You and your words are ONE.  Wow!  That’s deep.  I thought I was keeping it real and telling it like it is, but I see now how I was cancelling out or nullifying my prayers.”  Today I want to discuss this “keeping it real” comment.

1.  You speak your reality: a reality that is either based in this world or God’s realm.

I have been teaching on the importance of our words for years.  I am convinced, because of God’s Word and the Holy Spirit, that the Father does NOT want us to speak a single word that does not line up with His will, nor a single word we do not expect to come to pass.  However, whenever I teach on this, I inevitably run into someone who says something like, “Well Rick, I am just keeping it real.  You can say all the God stuff you want and you can speak what you believe.  But I am going to keep it real and speak what is really going on.”  I know people who genuinely love God who say things like this.  To be clear, this is a MAJOR problem.

Jesus taught us that our words expose what is going on in our hearts.  Paul taught us that we say what we believe.  In this series, I am teaching you how to withstand and overcome anything.  Well, guess what?  You won’t overcome something you have accepted to be your truth (or reality).  If you accept something as your final truth, without any power over it, then your current situation will never change.

In scripture, we see Jesus and the apostles encounter lots of situations where they saw something with their natural eyes, but at the same time, they saw something else in the spirit (another reality), and they spoke what they believed over what they were seeing with their natural eyes.  As a result, their earthly situation changed to match their divine reality.

If we are in the middle of a bad situation and we say that we believe God has something better for us, but we only speak what we see under the guise of “keeping it real,” then it is clear to me and clear to God that what you see, with your natural eyes, is more real to you than what He is revealing to you in your heart.  If God is showing you a way out of your situation or something better, but you keep just saying what you see because you want to “keep it real,” then you really don’t believe God on the level you claim to.  As Jesus said, your words are showing everyone what is going on in your heart.  To experience what God is revealing to you in your heart, you must have the courage and faith to say what you believe, so you can see what you believe in this world!

2.  Our God is a God who speaks what He desires to come to pass, not what He sees in the natural.

— The Bible says, “Faith empowers us to see that the universe was created and beautifully coordinated by the power of God’s words! He spoke and the invisible realm gave birth to all that is seen” (Hebrews 11:3 TPT).  I am convinced that most Christians do not understand the power of words.  God literally created the world by speaking words.

— God spoke to the water and called forth fish and everything that will live in the water.  God looked at the ground and called forth every herb yielding seed that would come from the ground.  The entire planet was framed by God speaking words.  In every account, God did not speak what He saw (in the natural).  He spoke what He saw in the Spirit.  God was “keeping it real.”  But not the way many Christians do today when they only speak what they see with their natural eyes.  God was truly keeping it real by speaking what He desired in the Spirit.

3.  God calls those things that are not as though they are.

— God looked at a barren couple (Abram and Sarai) and called them parents of many nations.  They became what God said.

— God looked at a coward (Gideon) and called him a champion.  He led a mighty revolution.

— God looked at a young boy (Jeremiah) and called him a prophet.  He went on to speak truth to power.

— God looked at a young shepherd boy (David) and called him a king.  He went on to lead Israel and become a man after God’s own heart.

— God looked at a young boy who had not done anything with his life yet (Joseph) and gave him a dream that he would one day rise above all his brothers and even his parents.  That dream would up driving his entire life.  He was promoted from prisoner to Prime Minister in a moment because he never “kept it real” and lost sight of the dream in his heart.

— God looked at a man who was living in the wilderness, thinking he had disqualified himself from his life’s assignment (Moses), and He called him to lead Israel out of Egypt.  He led millions.

— God looked at a virgin (Mary) and called her the mother of our Lord.  She believed what God said, and the impossible came to pass.

— God looked at a fisherman (Peter) and called him to become a fisher of men.  He led the New Testament church.

— God looked at a terrorist (Paul) and called him to be an evangelist for the same movement he was fighting against.  He went on to start churches all over Asia minor, and he wrote half the New Testament.

4.  Jesus called those things that were not as though they were.

— Jesus looked at a man who had been paralyzed for 38 years, and He did not “keep it real” by speaking what He saw.  Jesus told the man to take up his bed and walk.  The man did just that.

— Jesus looked at ten lepers, and He did not “keep it real” by saying, “Oh wow, you guys have leprosy.”  No.  Jesus spoke that they were CLEAN.  As they left, what Jesus said became their reality!

— Jesus looked at a dead man (Lazarus) whose body was stinking, where rigor-mortis had already set in.  Jesus did not “keep it real” and say, “Wow, He sure is dead.”  No.  If Jesus had spoken what He saw, nothing would have happened.  But Jesus spoke what he wanted, and Lazarus popped up like a mummy.

— Jesus looked at a fig tree that was strong and full of leaves, and He called it dead.  Twenty-four hours later, it was dried up from the roots.

I hope you get the point by now.  This series is based on 2 Corinthians 4.  I will close with something Paul said in the next chapter.

The Father and Jesus were not “being fake” when they refused to speak what they saw in the natural.  They were simply showing us how they (God) operate.  As God’s children, we are supposed to operate the same way.  Speaking words of faith from a believing heart will help us to withstand and overcome anything!

Father, this is a season of LEVELING UP for me.  I LEVEL UP by speaking the language of faith daily.  I now realize that I am living in two realms at the same time.  My body communicates with this world through my senses.  My Spirit communicates with Your world through the Holy Spirit.  I then have to choose which one I am going to believe and speak.  I declare that I will KEEP IT REAL from now on.  But NOT by speaking what I see with my natural eyes.  I will KEEP IT REAL by speaking what I see in the Spirit because what I believe in my heart is more real to me than what I see (in the natural).  This is how I know GREATER IS COMING FOR ME!  I declare this by faith.  In Jesus’ name, Amen!

We Can Withstand and Overcome Anything (Part 15) – The Faith to Say What God is Saying to You!