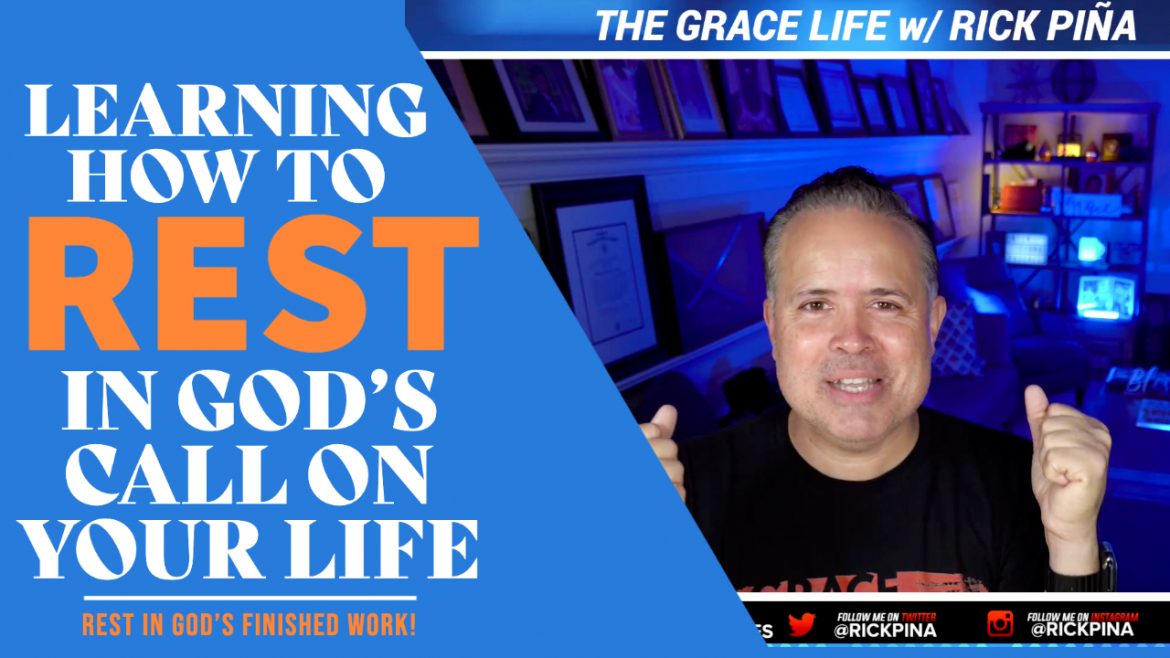 Note: I am heading to the Dominican Republic tomorrow. Over the next three weeks, we will have a family reunion, give away the 600 backpacks our partners and supporters helped us with, and celebrate two milestone birthdays. So, after praying about it for a while, I am led to NOT do Today’s Word during our vacation. That said, for the next three weeks, those who watch online will still get videos. I will provide “flashback” videos every morning. So if you watch on Facebook or YouTube, you can still tune in at 7 am, and you will still have the LIVE experience. It’s just that the message will be a prerecorded flashback. You will still be able to chat and interact with The Grace Life community. I love you all, and I am looking forward to this sabbatical. Please pray for my family and me, and we will do the same for you.

Today we will continue our series entitled “God’s Grace & Our Faith.” We are looking at The Law given under Moses vs. the Grace provided by Jesus.  Our primary scriptures are John 1:14 & 17.

Yesterday I made the point that we are NOT on an audition with God. It’s not like we are trying to prove to God that we are “good enough” for His assignment. The truth is that in and of ourselves, we are not worthy.  But God accepts us and uses us by His unearned grace. Today’s message will flow in this vein.

Let’s take a look at what the Apostle Paul said about his call: “But even before I was born, God chose me and called me by his marvelous grace. Then it pleased him to reveal his Son to me so that I would proclaim the Good News about Jesus to the Gentiles.” (Gal 1:15,16 NLT).

The Apostle Paul went on four missionary journeys, became a Pastor of Pastors, wrote half of the New Testament, and was (besides Jesus) the most influential person in the first-century church. But if you asked him, this is not the story of his life he would have written.

Paul grew up as Saul of Tarsus. He was being groomed to be part of the Jewish religious elite. He studied under Israel’s greatest teacher of the Law at the time, Gamaliel. He was mentored by Pharisees of the Pharisees. He was too young to participate in the stoning of Stephen, the first Christian martyr. So he held the coats of the men who were there as they stoned Stephen to death.

When he was of age, he led the persecution movement against Christians. He did this with all the zeal he could muster. He had Christians imprisoned, stoned, burned at-the-stake, and eaten alive by wild animals in coliseums. All the while, Saul of Tarsus thought he was doing this for God.  This is part of the crazy stuff that happens in the name of religion when people don’t have a true relationship with Jesus. But through it all, through all the mistakes, all the wrong turns, all the bad deeds, Paul later acknowledged the fact that God had called him before he was born by His marvelous grace.

So what does this mean to you today?  A few things.

1.  God made plans for you before the world began.

— While Paul was being groomed to scale the ladder of the Jewish religious elite, God’s plans for his life were already set. Nothing the Apostle Paul did while he was living as Saul of Tarsus could change God’s plans.

— While Paul was investing time, energy, and boundless effort into becoming just like his mentors, God already had other plans for Paul. And to be clear, if Paul had continued down that path and if the world considered him a “success” in that system, he would have never been a success in God’s eyes.  Because in God’s Kingdom, success is measured in the measure of divine purpose that you accomplished BEFORE you died!

— Before Paul had one Christian killed, before he held the coats of the men who killed Stephen, before he went on one incarceration campaign, God had already called him to preach the Gospel he was fighting against.

— God’s plan for your life is fixed and established. It was set before you were born.  Nothing you do will cause God to change His mind about His plans for you. The key is understanding that you never experience God’s best until you die to self and rest in God’s finished work.  The only way to truly succeed in life is to become the man/woman you are destined to be.

2.  God calls you by His grace and not your works.

— Paul did nothing to earn or deserve his call. You can make the argument that he clearly worked against it.  But God called him anyway. The same can be said for you.

— God does not call you because of your works. God calls you to His purpose by His grace. Paul said, “God has saved us and called us to a holy life—not because of anything we have done but because of his own purpose and grace. This grace was given us in Christ Jesus before the beginning of time.” (2 Timothy 1:9).

— God’s call on your life is finished.  It will not change. Paul said, “for God’s gifts and his call are irrevocable.” (Romans 11:29). The word irrevocable means that it means!

— You cannot disqualify yourself because you never qualified in the first place.  All you can do is accept, believe, embrace, and walk in God’s call because it is His finished work. When you do, you will experience the life you were born to live, which will be amazing.

— Jesus said, “Any of you who want to be my follower must stop thinking about yourself and what you want. You must be willing to carry the cross that is given to you for following me. Any of you who try to save the life you have will lose it. But you who give up your life for me and for the Good News will save it.” (Mark 8:34,35 ERV).

— God has never required any less than ALL OF US!  There is a supernatural life waiting for you on the other side of your personal cross. The day you die to self is the day you will begin living.

3.  Many believers are working to earn what God has already provided.

— While the Apostle Paul was living as Saul of Tarsus, it is clear that he was a driven man. He worked hard to become part of the Jewish religious elite. He worked hard on persecuting Christians.  He worked hard to obtain the approval of God. However, what he did not know was that Jesus had already made him approved in God’s eyes. Jesus had already made him pleasing in the Father’s sight. Jesus had already provided everything he was working hard to earn, and since he was doing it with his human ability and strength (which is flawed), he spent years working hard on the wrong thing. It was not until he died to self that he truly began to live for Christ.  And at that point, it was not about what he did; it was about what God had already planned for him to do.

— Don’t work on gaining God’s approval. Your work will never be good enough. Jesus already provided your approval. The only way to be pleasing in God’s sight is by accepting Jesus as Lord and embracing the righteousness He died to give you.

— You can’t work to be holy. The only way to be holy is to rest in the holiness provided by Jesus.

— Stop trying so hard to work for things Jesus already provided.  Rest in His finished work.

4.  Your life will change forever the day you die to self, and you learn to rest in God’s finished work.  This is #TheGraceLife.

— When you know you are not working to attain anything in God, you are then in a position to live the life of faith you are called to live.  Faith believes, receives, and pursues everything God has already provided by grace.

— Don’t mistake the message of grace to mean that you don’t have to do anything. While you cannot work FOR grace, you are most definitely called to work BY grace. The difference is that when you know you are working BY God’s grace and not by human effort, you will work harder than you ever have, but it won’t be you doing it. It will be the Father living in you; He will give you the words, and He will perform the work.

— The Apostle Paul understood the grace of God. He knew he was not worthy of being an Apostle, but Jesus was worthy for him. He knew he worked harder than all the other Apostles, but he also knew it was not him doing the work. He said, “I worked harder than all the other apostles. But I was not really the one working. It was God’s grace working through me.” (1 Cor 15:10). When you understand what Paul understood, you can work and rest at the same time.

Thankfully I now understand the Gospel! Jesus was good enough for me! My job now is to rest in His finished work.

I am holy because Jesus made me holy. I am righteous because You imputed Jesus’ righteousness on me. I now understand that I cannot work FOR grace. I work BY grace.

I work harder than I ever have. But I don’t stress or get burned out, my body does not break down, my soul is at peace, and I get sweet sleep.

This happens because I am not the one doing the work. It is You, Father, living in me and through me. By Your grace, I am able to WORK and REST at the same time! Living this way, I know GREATER IS COMING FOR ME! I declare this by faith. In Jesus’ name. Amen.

This is Today’s Word! Apply it and Prosper.