The Enormity of God’s Call 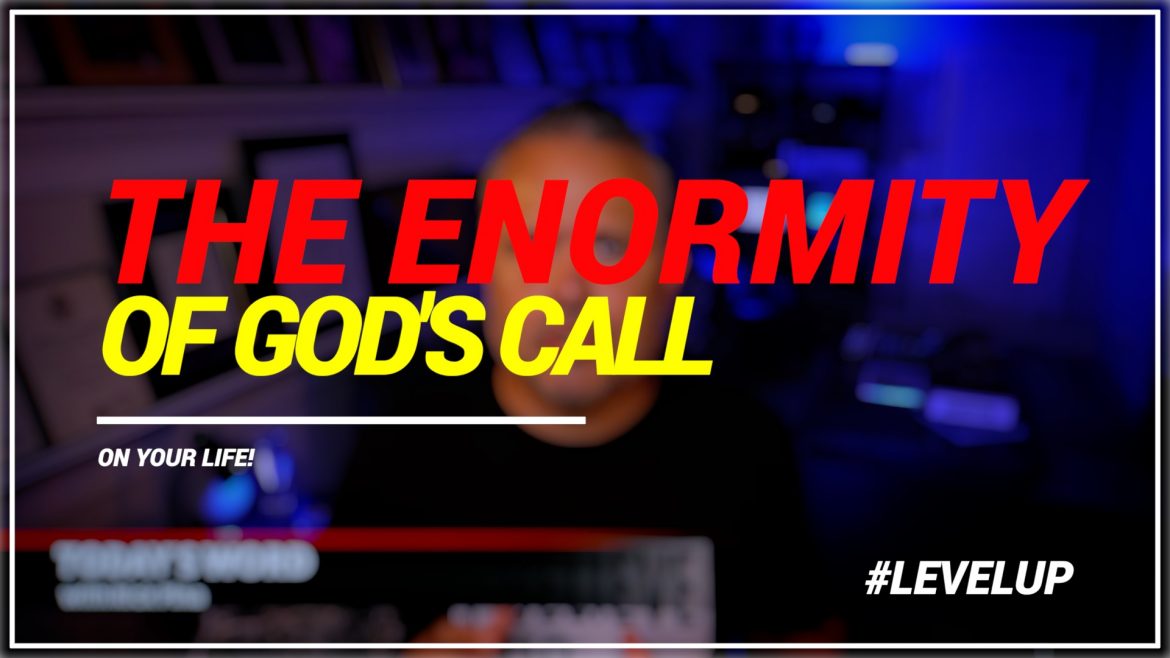 Today we continue our series entitled “Destiny’s Child – You Are Not a Mistake!”  We have looked at Jeremiah 1:5 for a couple of days.  Today we will look at this verse again and also look at Jeremiah’s response to God’s call.

The Lord said to Jeremiah, “Before I made you in your mother’s womb, I knew you.  Before you were born, I chose you for a special work.  I chose you to be a prophet to the nations.”  Jeremiah responded, “But, Lord God, I don’t know how to speak. I am only a boy.”  The Lord then responded to him, “Don’t say, ‘I am only a boy.  You must go everywhere I send you and say everything I tell you to say.  Don’t be afraid of anyone.  I am with you, and I will protect you.” (see Jer 1:5-8 ERV).

1.  The initial response to the enormity of God’s assignment is often inadequacy.

— When God reveals to you what He sent you to this planet to do, it can easily be overwhelming.  God has known about your assignment since the beginning of time.  He has the benefit of knowing all things and having all power.  Noting intimidates God because there is nothing He cannot do.  However, we, as humans, are in a different boat.  We were born as mere men.  We are finite and flawed.  We grow up and are influenced by the conditions of our upbringing.  We believe whatever we believe because of our experiences, the credible authority figures who have spoken into our lives, and whatever relationship with God we either had or did not have growing up.  But then, when God we hear God’s voice, and He makes His call for our lives clear, it’s easy to feel underqualified or flat-out unqualified.  God told Moses to speak to Pharoah, and he told God that he could not speak.  God told Gideon to lead men as a mighty man of valor and he told God that he was the weakest man from the weakest clan in all of Israel.  God told Jeremiah that he was a prophet unto the nations, and he told God that he was too young and that he did not know how to speak.  Now, some may welcome the call from the moment they learn of it.  Paul was ready to preach as soon as God revealed to him that he was called.  David was ready to lead as soon as the prophet anointed him with oil.  I am in this boat.  As soon as God revealed Himself to me, I was ready to preach the Gospel at the tender age of 23, and I have never stopped preaching.

— When God reveals to someone what they are on this planet to do, some run from the call, others run to it, but whatever the initial response, most understand the enormity of the call.  They know that they will never be able to get it done if God does not do it through them.

— Jeremiah was a young man when God revealed to him his divine assignment.  He was called to be a prophet.  Jeremiah’s response was, “But, Lord God, I don’t know how to speak. I am only a boy.”  Jeremiah was looking at his human position and perceived ability, while God was looking at His own endless power.  Jeremiah was focused on himself and whether or not he considered himself up to the task.  While God knew He was not asking Jeremiah to do it on his own.  Herein lies the major difference between living by works or human effort and living by faith in God’s grace.

— God calls us to do things we cannot do.  He does this so our reliance will be on Him.  But if we don’t understand God’s grace and we don’t put the emphasis on God and His power, it is easy to do what Jeremiah did and question our ability to perform.  The enormity of God’s call often causes us to feel inadequate, and if we are relying on human ability, then we are right.  We could NEVER do what God has called us to do without Him.  But that’s the point.  We don’t have to!  God is with us every step of the way.

— God calls us to do things that exceed human power, ability, and strength.  Jeremiah’s call was to a supernatural assignment.  No human can discern the future and prophesy of the things to come unless the Lord reveals them to him/her.  There was no way Jeremiah could do this in his own power, but God never expected him to.  If Jeremiah provided the willingness, God already had the words.  If Jeremiah opened his mouth, God would fill it.  My point is that God is not relying on your ability.  He is only looking for your availability and faith.

— It’s okay to feel inadequate for your divine assignment initially.  If you don’t, then you probably did not grasp the enormity of it.  When you eventually do, you may feel inadequate in your own strength, but that does not matter because you won’t be the one doing it.  It will be the Lord, working through you, He will give you the words, and He will perform the work (John 14:10 & 12).

— God is too big of a God to call you to do something you could do on your own.  If you can do it without God, it is not a calling; it is a task.  A true calling is something that you will never be able to do unless God does it through you!

— When God reveals to you what He called you to do from the foundations of the world, He is not checking your bank account, credit score, resume, level of education, or circle of friends.  He calls the clearly unqualified to perform the seemingly impossible.  At that point, God is not looking for credentials; He is simply looking for faith!

2.  God is looking for you to rest in His power, ability, and strength.

— God told Jeremiah that He would send him where he needed to go, provide the words to say when he got there, and protect him along the way.  Jeremiah was afraid because he was thinking about his own abilities.  God did not want Jeremiah focused on human strength at all.  God was looking for Jeremiah to rest in His power, His grace, and His commitment towards Jeremiah.  What is true for Jeremiah is true for you!

— Everything related to Jeremiah’s divine assignment was finished before Jeremiah ever got started.  God had already mapped it out.  God made provisions for everything Jeremiah would need before the young man even started his ministry.  Guess what?  God did the same for you.  This is why He is looking for you to REST in His Finished Work!

— God did you ONE BETTER than He did Jeremiah.  Jeremiah was called in the Old Testament.  Under the Old Covenant, the Spirit of God did NOT live inside of a man.  Humanity lost God’s indwelling presence when Adam sinned in the Garden of Eden, and mankind would not regain access to the Holy Spirit until Jesus’ redemptive work on the cross.  So, in the Old Testament, the Spirit of God would come UPON men/women.  But He would not dwell IN them.  If you are Born-Again, you are under the New Covenant.  The moment you accepted Jesus as Lord and you repented from sin, you were filled with God’s presence in the form of the Holy Spirit.  When you consider the enormity of your call, and you get thoughts of inadequacy, the Holy Spirit HIMSELF, living on the INSIDE of you, will remind you that you are not the one who has to do it.

— God’s call is not contingent upon your performance.  It is God Himself who lives in you.  He will give you the words, and He will perform the work (John 14:10 & 12).  Your job is to exercise faith in God’s grace.  Your job is to believe and receive what He already planned.  Your job is to launch out to attempt what is clearly beyond your ability to perform and to trust in God every step of the way, believing that where you end, He begins.  Where you can’t, He can, and He will.  This is the life of faith.  This is how you enter into God’s rest where the finished work of Jesus, in your life, is concerned.  This is how we are supposed to live!

Father, this is a season of LEVELING UP for me!  I LEVEL UP by accepting Your amazing grace.  You called me to do things that exceed my ability and power.  But You never expected ME to do it.  You never required ME to have what is required to get it done.  You empower me to do what I could never do without You by bestowing Your grace upon me.  Not only that, but everything I need to accomplish Your assignment is already prepared.  You are now preparing me for what You prepared.  This preparation process does not require more TRYING.  It requires more DYING!  My job is to die to self to the point where I die to my limits.  I yield to You.  I embrace Your grace.  I declare that I will complete my divine assignment before I die.  I will leave a mark in this world that will outlive me.  But it won’t be me doing it.  It will be You, Father, living in me, giving me the words, and performing the work.  This is why I choose to REST in Your finished work, and why I boldly declare: GREATER IS COMING FOR ME!  I declare this by faith.  In Jesus’ name.  Amen.

You Are A Child of Destiny

God Set You Apart For His Purpose