Intentional Progress in 2022: Life Lessons From Jesus (Part 38) – The Road to the Resurrection (Part 9) 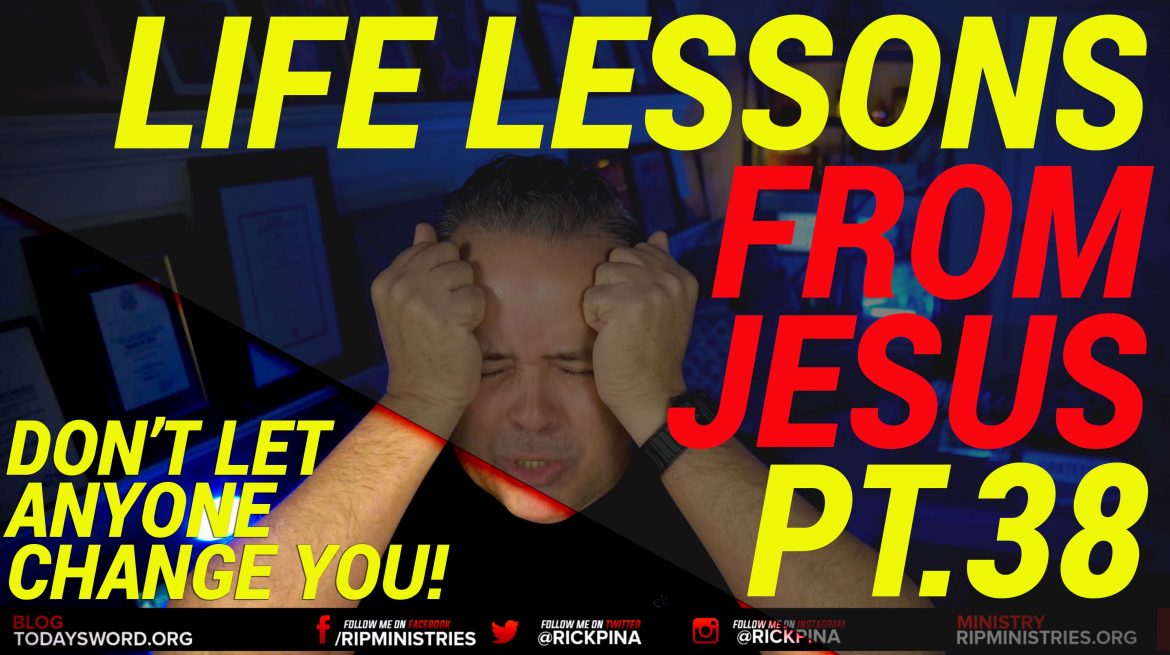 In our last message, we saw how Pilate offered the Jews an ‘out’ by giving the Jews the option of releasing one of the prisoners. Instead of choosing Jesus, the Jews opted to release Barabbas.

Pilate did not find Jesus guilty of anything, but he went along with the Jewish leaders, and he ordered Jesus to be beaten. So a group of Roman soldiers took the opportunity to ridicule the claim that Jesus was the King of the Jews. The soldiers twisted a crown out of thorn branches and put it on Jesus’ head. They put a purple robe on Him so that He could look like a King, and they then yelled at Jesus, saying, “Hey, you king of the Jews,” as they took turns slapping my Jesus across the face.

While this was going on, Pilate went out to address the crowd. The Roman governor said, “I will have Jesus brought out to you again. Then you can see for yourselves that I have not found him guilty.” Jesus came out, wearing the crown of thorns and the purple robe. Pilate said, “Here is the man!” When the chief priests and the temple police saw him, they yelled, “Crucify him! Crucify him!” But Pilate wanted nothing to do with it. He said, “You take him and nail him to a cross! I don’t find him guilty of anything.” However, the Jewish leaders were persistent. They replied, “By our law he ought to die because he called himself the Son of God.”

1.  Jesus was attacked for being Himself.

You have probably read this story countless times, but you can never read it enough. You should be reminded of the persecution, ridicule, and pain Jesus endured for you.

— Jesus was given 39 lashes with a cat-o-nine-tails.

— Roman soldiers pushed a crown of thorns into His head to the point where the blood was dripping down his face.

— Jesus was clothed with a purple robe and mocked as the “King of the Jews.”

— Soldiers took turns yelling at Jesus and slapping Him across the face.

— If all of this were not bad enough, they nailed our Jesus to the cross – the most brutal form of execution at the time.

Why did they do all of this? What did Jesus do wrong? All He did was claim to be the Son of God.  Jesus’ only crime was that He disclosed His true identity. Jesus was persecuted for being Himself.

2.  You will be attacked for being yourself.

The servant is not greater than the Master.  Just like our Master was persecuted for being Himself, you will, from time to time, experience the same.

— Some people will not like you for being open, honest, or a person of integrity because we operate in a world where deceit, dishonesty, trickery, and fraud are a way of life.

— As Christians, we will naturally ‘stick out’ because of who we are, but please do not allow the world to change you.  Jesus never wavered.  He knew who He was, and He maintained His integrity, even when the pressure was on.  As a child of God, you must do the same.

— Be whom God has formed and called you to be, and if you get attacked for it, so be it.  Along with your calling, God has given you the grace to maintain your integrity against any attack.

— Walk in the authenticity of your assignment, even if it means you get attacked or talked about becuase of it.  Our sufferings down here are not worthy to be compared with the glory we will receive up there!

3. When you know you are, you become a danger to those who don’t.

I will use Saul and David as an example here.  In one moment, Saul loved David because David dealt with this giant (Goliath) problem.  But when crowds started calling out David’s name, it made the king furious.

Saul hated David because of his own insecurities.  The issue was with Saul, not David.  My point is that sometimes people you don’t even know will hate you.  Or, like in this case, people of authority, who are over you, might develop bitterness and resentment toward you simply because God favors the work of your hands.  See, the favor of God can cause you to experience uncommon, unusual, and atypical success.  David was only 17 years old, but he was a national hero, and people were chanting his name.  This can happen today in boardrooms, conference rooms, meetings, video calls, business transactions, etc.  When God favors you, some people will love you for it.  Others may despise you because of it, due to their own insecurities.

Going back to Jesus: the Pharisees and Sadducees did not like what Jesus was doing.  They pushed back hard on Him.  They were upset that Jesus was healing people on a Saturday because they could not heal people on any day.  They were upset that Jesus was drawing crowds when their synagogues were only getting a portion of what Jesus was drawing.  Simply put, they were intimidated by the success of Jesus’ ministry.  And remember, these were supposed to be the Godly leaders.  They should have known better.  But sadly, sometimes, even in the church, we experience jealousy and attacks.

Here’s the good news.  Jesus was not moved by them or their opinions of Him.  Jesus did not allow their attacks to slow down His momentum.  Jesus kept doing whatever the Father led Him to do.  This is how we are supposed to live!  Like Jesus, I would rather be in sync with heaven, and out of sync with people down here in this world, than the other way around.

4.  Walk in the authenticity of your divine assignment. You may be attacked for it, but in the end, it will work out for your good.

— Trailblazers are always misunderstood.  Things look impossible until someone does them.  We all know this, but what about the people who pursue the seemingly impossible?  While they pursue it, others criticize them and even consider them “crazy” until they accomplish what no one thought was possible.

— People naturally pushback on things I can’t figure out.  They criticize what they do not understand.

— Jesus was a King.  But His Kingdom was not of this world.  He was going around telling people that He was a King from another world, and people did not understand it.  Therefore, they criticized and attacked what they did not understand.  Guess what?  They will do the same to you.

— Since you are a child of God, the Father will lead you to do things that are in harmony with His heart.  If you follow His divine impulses, it will mean that you live your life in harmony and in sync with heaven.  But just know that if you do that, you will be misunderstood, criticized, and attacked by the people down here, in this world.  You have to be OK with that to live by faith and make the impact you were born to make.  If you want to walk in the authenticity of your divine assignment, you have to become comfortable with being misunderstood.

— If you’re looking for validation from men, then you may never fully maximize your purpose and potential in God because men will not validate what they don’t understand.

— God wants to manifest His glory in, with, and through your life.  He wants your life to testify of Him.  He wants your life to emanate His glory everywhere you go.  So don’t dim your light, don’t turn down the volume on the song that God is singing in your heart, just because people don’t like it.  Keep singing your song!  Keep allowing God’s light to sign through you.  Misunderstood or not, God will elevate you to the point where they will have to pay attention to you!  At that point, the people who attacked may wind up reporting to you!

—  When you walk in the authenticity of your assignment, you will be honored and celebrated by those who discern what God is doing in and through your life.  But at the same time, you be attacked by those who are carnally minded.  Either way, don’t be moved by men.  Don’t allow the praise of men to cause you to think too highly of yourself, and don’t allow the criticism of men to cause you to turn down the volume on your life!  Just keep doing whatever the Holy Spirit leads you to do!  In the end, your reward will be great!

Father, I thank You for teaching about the amazing life of Your Son Jesus.  Jesus endured 39 lashes with a cat-o-nine-tails.  Every strike was like 9 strikes.  The ends of the lashes had pieces of stone and metal woven into them so that the pieces would lodge themselves into Jesus’ back with every whip.  And then the soldier pulled the whip back, pieces of Jesus’ flesh ripped off every time.  By the end of the 39 lashes Jesus’ back was completely ripped open.  They then drove a crown of thorns into His head, to the point where blood was streaming down His face.  Jesus could have killed them all, but He didn’t it, because He was thinking of me.  Jesus endured the pain of the cross for the joy that was set before Him.  And Jesus’ only crime was that He claimed to be the Son of God.  Jesus was attacked and beaten, just for being Himself.  Like Jesus, I know I will be attacked for being the person You have called me to be.  But I shall not be moved.  I will do whatever You lead me to do, however, You lead me to do it.  I will not dim my life.  I will not turn down my volume.  I will live as the man/woman I was born to be!  Therefore, GREATER IS COMING FOR ME!  I declare this by faith.  In Jesus’ name.  Amen.

Intentional Progress in 2022: Life Lessons From Jesus (Part 37) – The Road to the Resurrection (Part 8)

Intentional Progress in 2022: Life Lessons From Jesus (Part 39) – The Road to the Resurrection (Part 10)